While the incident occurred on September 16, a video purportedly of the incident went viral on Sunday. Bharat Reddy, a former district general secretary of BJP, is seen abusing the two youths and beating them with a stick 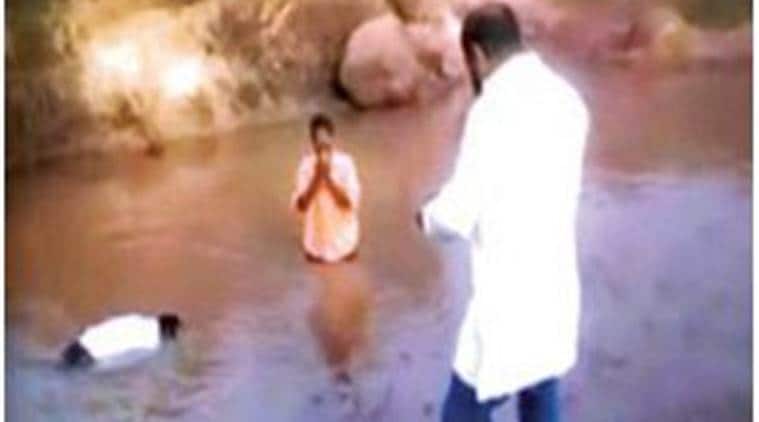 A screen grab of the video that went viral on Sunday.

A former BJP leader in Telangana’s Nizamabad district allegedly made two Dalit youths take a dip in a dirty pond for entering his sand quarry without permission. While the incident occurred on September 16 in Abhangapatnam village in Navipet Mandal, a video purportedly of the incident went viral on Sunday. Bharat Reddy, a former district general secretary of the party, is also shown abusing the two youths and beating them with a stick in the video.

Dalit organisations took to the streets to protest against the incident and demanded Reddy’s arrest.

Police, however, said the youths have refused to lodge a complaint against Reddy. “Based on a complaint by Dalit leaders we have registered a case and investigating the matter,” said Sub-Inspector J Naresh of Navipet Police Station.

The two youths have been identified as K Lakshman and Rajesh. The duo had allegedly gone to the quarry, located on the outskirts of the village, to enquire if they had the necessary permission to mine sand. However, the workers at the quarry suspected them to be thieves and caught hold of them. They reported the matter to Reddy, who arrived and started beating them with a stick.

Later, Reddy took Rajeshwar and Lakshman to a dirty pond, which is said to be used for defecation, and forced them to take a dip in it. The video shows the youths begging his pardon but to no avail. Reddy is heard using filthy language and also asking them to apologise by rubbing their nose on the ground.