Periyar, who is considered one of the greatest leaders across the globe, laid the ideological foundation for the political leaders in the state. 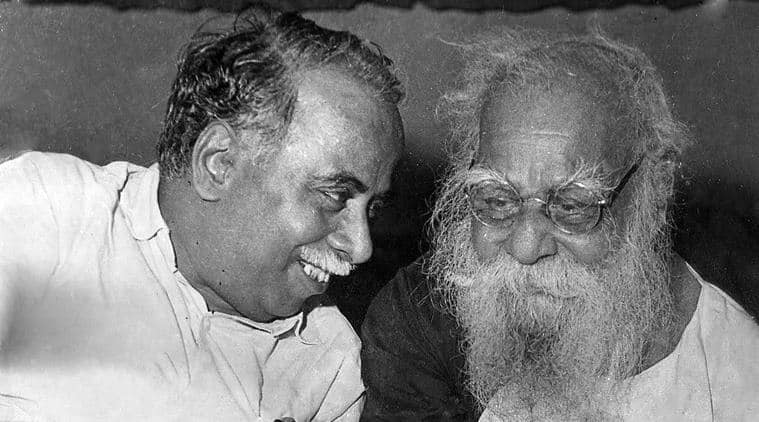 The BJP Tuesday stoked a controversy by tweeting about Dravidian ideologue E.V. Ramasamy, popularly known as Periyar, on his 46th death anniversary. Taking a dig at the social reformer’s personal life, the saffron party posted a picture of him alongside his wife Maniammai (whom he married at the age of 69 when she was 31) and wrote that a society has to be built without any Posco accused.

“Today is the death anniversary of Maniammai’s father Periyar. Let us support the death penalty for people who sexually assault children and take the pledge that we will create a society without any Posco accused,” the BJP tweeted.

Soon, the tweet garnered huge attention and netizens slammed the saffron party for putting out a vile tweet on Periyar’s personal life. DMK MP Kanimozhi condemned BJP’s tweet by stating that Periyar worked tirelessly to build a society that encourages women’s rights and it is common to receive a comment like this from BJP who are unaware of women’s rights and civilisation.

The image was tweeted through BJP Tamil Nadu’s official handle and later it was deleted. Again, the state’s official handle retweeted the same content from its IT wing account (TNBJPITWING ), which too was deleted after some time. However, some netizens took a screenshot of the tweet and vented their ire.

Looks like the BJP loves digging it's own grave in TN. You think you will have a cake walk despite such obnoxious tweets that richly goes against popular sentiment of the state?
In that case, get well soon!@BJP4TamilNadu @BJP4India #Periyar pic.twitter.com/0lseJMotcl

TN BJP stooping so low on a regular basis is the product of frustration caused by the party's gloomy affairs in TN. This tweet for example, attacks the man who created a deep-rooted ideology that opposes BJP. #Periyar is STILL kicking you and closed doors of TN for you, forever! pic.twitter.com/fEIjawWrTt

Taking to Twitter, DMK leader MK Stalin wrote that BJP could have put some thought before putting out a demeaning post about Periyar and later deleting it. “Let that fear be there. Periyar is giving jitters even after his death. Will AIADMK pounce like a Tiger on this issue? or will it hide like an earthworm?” he wrote.

MDMK leader Vaiko said, “The official handle of BJP has put out something which I cannot say out in the open. They should tender a public apology for dishonoring Periyar by a false accusation. I never thought they will stoop this low, they should remove the post immediately,” he said.

Surprisingly, BJP’s allies AIADMK and PMK too condemned the tweet. Taking to Twitter, PMK founder S. Ramadoss called BJP’s tweet ‘disgusting’. “BJP and their IT wing’s post about Periyar on his anniversary is disgusting. This shows their jaundiced eyes. This act is severally condemnable,” he wrote.

Tamil Nadu Cooperation Minister Sellur K.Raju said if unity and brotherhood is still prevailing in Tamil Nadu, it is because of Periyar. “Tamil Nadu is Dravidian land, we will not accept if someone talks ill about Periyar or Maniyammai. On behalf of Dravidar Kazhagam, we will condemn whoever speaks ill about great leaders like Periyar, Anna, MGR and Kalaignar,” he said.

Speaking to the reporters, Nirmal Kumar, the BJP State President for IT & Social Media said he stands by what was said. “We removed the tweet after our party leaders and allies requested. We haven’t posted anything new,  DMK leaders like Anna, Kalaignar have said similar things when they formed their own party.”

Periyar, who is considered one of the greatest leaders across the globe, laid the ideological foundation for the political leaders in the state. The Dravidian patriarch’s vision paved the way for the rise of leaders like CN Annadurai, M.Karunaidhi, MG Ramachandran. Periyar is hailed for his egalitarian ideology and his untiring effort towards the upliftment of minorities and women.

Saif Ali Khan on CAA protests: It is everybody’s right to protest peacefully