Sirajuddin is also the head of the Haqqani Network, a sprawling Islamist terrorist mafia with close ties to al-Qaeda, based in Pakistan’s North Waziristan. He was designated a global terrorist by the UN way back in 2007 and the US announced a bounty of $10 million on him. 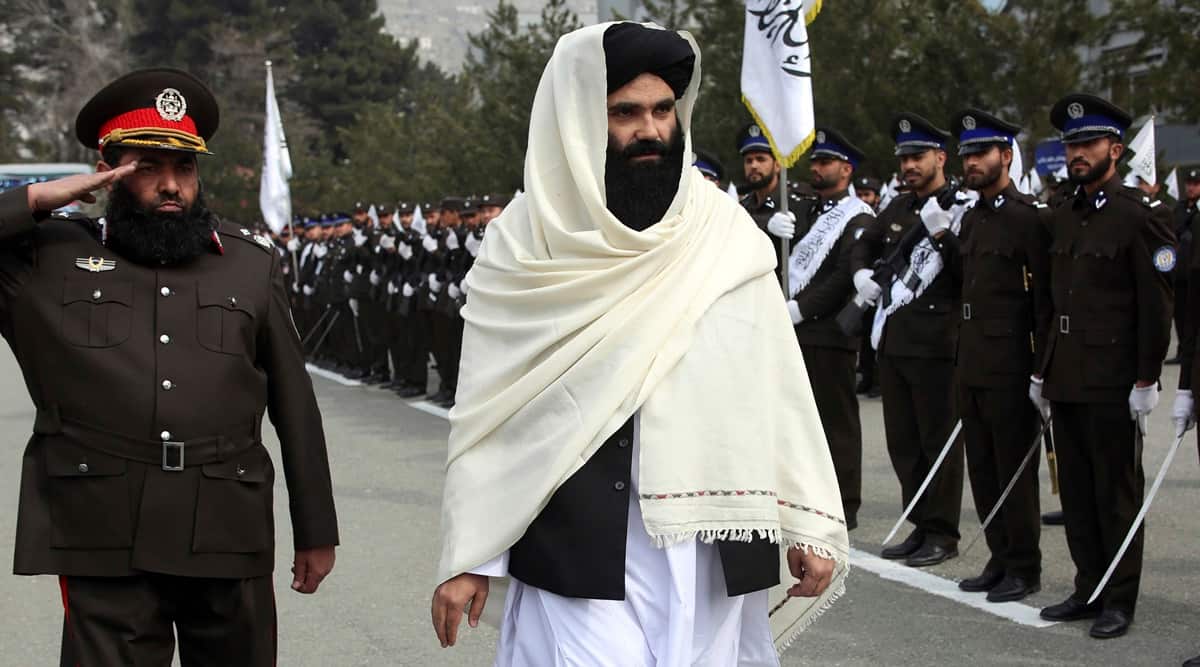 Afghanistan’s Taliban government has for the first time put out a picture of its interior minister, Sirajuddin Haqqani, who also happens to be a UN-designated terrorist. The picture tweeted by Zabihulla Mujahid, spokesperson of the Islamic Emirate of Afghanistan, is the elusive leader’s first image in decades where his face is clearly visible.

The picture was tweeted on Saturday with the message: “The Minister of Interior of The Islamic Emirate, Khalifa Sahib Sirajuddin Haqqani Hafizullah inaugurated the graduation ceremony of the National Police.”

Even the US, which had chased Haqqani for over a decade and a half, has only a side profile of the wanted terrorist with his face half-covered vertically in a shawl. India, which has accused him of masterminding several attacks on its assets in Afghanistan, including its embassy, has no frontal images of his face either.

Interestingly, even after Haqqani became a part of the government in September 2021, the Taliban made every effort to keep him off any publicity material it released. In a series of pictures released following a Taliban meeting in October last year at the Intercontinental Hotel in Kabul, Haqqani’s face was either seen hidden by bouquets or deliberately blurred.

Sources in the security establishment said the change in Taliban’s position over Haqqani’s exposure to the public could be part of its attempt at seeking legitimacy for him.

Sirajuddin Haqqani’s appointment as Afghanistan’s interior minister was seen as Pakistan cocking a snook at the world.

“Now that the government is a few months old and the world has begun engaging with it despite not recognising it officially, the Taliban may be testing the waters with this one on Haqqani. Also, as they seek relief from across the world, they want to come forward and signal that the world can openly engage with them. It may also be a signal that they want to come out of the shadow of their handlers in Pakistan,” said a former Research & Analysis Wing official who has watched Afghanistan closely.

Haqqani’s appointment as Afghanistan’s interior minister was seen as Pakistan cocking a snook at the world. Not only had Pakistan managed to have its long-time strategic assets in top positions of the Taliban government, it had also virtually got the UN-designated terrorist, whom it had sheltered for decades, appointed as the No. 2.

In Premium Now |What Taliban 3.0 means for security in Af-Pak and beyond

The Taliban group based in Doha, which had been negotiating with the international community and had established contacts with New Delhi, appeared to have been sidelined.

From New Delhi’s perspective, Sirajuddin Haqqani’s appointment as Afghanistan’s interior minister was the most telling signal that the cabinet had been hand-picked by the ISI.

Son of the former mujahideen fighter and CIA asset Jalaluddin Haqqani, whose death was announced in September 2018, Sirajuddin is also the head of the Haqqani Network, a sprawling Islamist terrorist mafia with close ties to al-Qaeda, based in Pakistan’s North Waziristan. He was responsible for the terrorist attack on the Indian embassy in Kabul in 2008 that killed 58 people, and attacks against Indians and Indian interests in Afghanistan in 2009 and 2010. He was designated a global terrorist by the UN way back in 2007 and the US announced a bounty of $10 million on him.

Explained |Who are the Haqqani Network, the most powerful group in Taliban government?

According to the FBI, Sirajuddin is wanted in the US for questioning in connection with the January 2008 attack on a hotel in Kabul that killed six people including an American citizen. “He is believed to have coordinated and participated in cross-border attacks against United States and coalition forces in Afghanistan. Haqqani was also allegedly involved in the planning of the assassination attempt on Afghan President Hamid Karzai in 2008.”

As interior minister, Sirajuddin’s mandate includes not just law and order, but also appointments of provincial governors, under the garb of “local governance”.

Sirajuddin is also the head of the Haqqani Network.

According to a 2010 report on the Haqqani Network by US-based think tank Institute for the Study of War, Sirajuddin’s mother is an Arab woman who was the second wife of Jalaluddin. She is said to be living in a Gulf country.

The UN listing of Sirajuddin says he “participated in the financing, planning, facilitating, preparing, or perpetrating of acts or activities by, in conjunction with, under the name of, on behalf or in support of Taliban, al-Qaeda, and Jaish-i-Mohammed”.

It describes him as “one of the most prominent, influential, charismatic and experienced leaders within the Haqqani Network… and has been one of the major operational commanders of the network since 2004. After the fall of the Taliban in 2001, Sirajuddin Haqqani took control of the Haqqani Network and has since then led the group into the forefront of insurgent activities in Afghanistan”.

According to the listing, he derived much of his power and authority from his father, Jalaluddin Haqqani — who was also listed, and described as “a go-between for al-Qaeda and the Taliban on both sides of the Afghanistan/Pakistan border”.

Sirajuddin was involved in the suicide bombing attack against a police bus in Kabul on June 18, 2007, which killed 35 police officers.