Sushma Swaraj death | Sushma Swaraj passed away after suffering a cardiac attack on Tuesday. She was admitted to the All India Institute of Sciences (AIIMS) in New Delhi. She was 67.

Former External Affairs Minister Sushma Swaraj passed away after suffering a cardiac attack on Tuesday. She was admitted to the All India Institute of Sciences (AIIMS) in New Delhi. She was 67. The senior BJP leader in her last tweet thanked Prime Minister Narendra Modi for the government’s move on Kashmir.  She said, ” I was waiting to see this day in my lifetime.” Follow LIVE Updates here

A former Supreme Court lawyer, she was born on February 14, 1953, in Ambala Cantt, Haryana. Her father was a Rashtriya Swayamsevak Sangh (RSS) member. Swaraj began her political career with Akhil Bharatiya Vidyarthi Parishad in the 1970s.

Minutes after her death, PM Modi posted a series of tweets saying, “A glorious chapter in Indian politics comes to an end. India grieves the demise of a remarkable leader who devoted her life to public service and bettering lives of the poor. Sushma Swaraj Ji was one of her kind, who was a source of inspiration for crores of people..”

Sushma Swaraj suffered a cardiac arrest. Here are the HIGHLIGHTS

Ministry of Foreign Affairs of Russia remembers Sushma Swaraj: "We express our sincere condolences to the people of India on the premature passing away of the former Foreign Minister of this friendly country."

Whenever any Indian got into trouble, didi (Sushma Swaraj) took care of it herself: Piyush Goyal

Leaders cutting across party lines expressed shock at the sudden demise of former external affairs minister Sushma Swaraj on Tuesday. Union Minister Piyush Goyal said, "passing away of Sushma ji is an irreparable loss. People of the country will remember her contribution for a long time. Whenever any Indian got into trouble, didi took care of it herself, even when it came to the return of a single nurse from abroad."

External Affairs Minister S Jaishankar said, "Deeply shocked to learn of the passing away of Smt Sushma Swaraj. Difficult to accept this news. The whole nation grieves, the Foreign Ministry even more so."

BJP leader and former union minister Arun Jaitley said, "Saddened, pained and broken on the demise of Sushmaji. She was one of the most outstanding politicians in the Present Era. She distinguished in all positions. She held Senior Positions with the Party, NDA Govt. & while in opposition. She leaves behind a void which is difficult to fill."

"When I came back from Parliament today, I saw Sushma Swaraj's tweet on Article 370 revoked and then news came that she is no more. I've no words," said Union Minister Ravi Shankar Prasad. https://t.co/UixXQXrl8B pic.twitter.com/fJnjVewBvF

A host of Union ministers and other senior party leaders visited AIIMS and met the bereaved family of the former external affairs minister.
A pall of gloom descended at the hospital as the news of her death left everyone in shock. 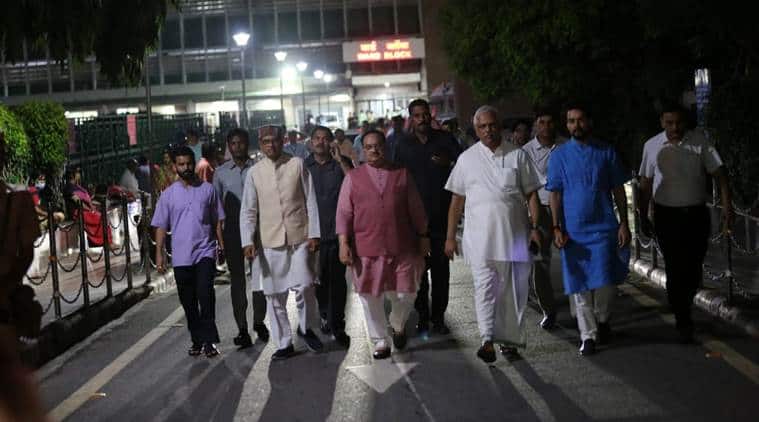 May she forever rest in peace: Foreign Minister, Islamic Republic of Iran

Javad Zarif, Foreign Minister of Iran, expressed grief on the passing of Sushma Swaraj. "My deepest condolences to the government and the people of India on the passing of former External Affairs Minister Sushma Swaraj. I had many fruitful and useful discussions with her while she held office, and am saddened by her sudden passing," Javad Zarif said.

My deepest condolences to the government and the people of India on the passing of former External Affairs Minister Sushma Swaraj.

I had many fruitful and useful discussions with her while she held office, and am saddened by her sudden passing.

May she forever rest in peace. pic.twitter.com/FHtjyQbExf

My deepest condolences to the people & government of India on the loss of a distinguished public figure who represented her country with distinction and determination, said Salahuddin Rabbani, Minister of Foreign Affairs Afghanistan.

I’m saddened to hear of the untimely demise of @SushmaSwaraj, Senior BJP leader & former Foreign Minister of India. My deepest condolences to the people & government of India on the loss of a distinguished public figure who represented her country w/ distinction & determination.

Passing away of Sushma ji is a personal loss for me, BJP, & the country. Since the inception of the party, she played a key role in its expansion. When I was the President of BJP, she gave me guidance as an elder sister, said Union Minister & BJP leader Nitin Gadkari.

A politician who was respected across party lines, Swaraj was aptly called the crusading “Supermom” of India by the Washington Post for solving the problems of distressed Indians around the world.  From reuniting families to helping citizens recover their passport and travel home from war-torn countries, every request for help, small or big, never bypassed the attention Swaraj, who has blazed a trail for future foreign ministers through her social media heroics. Read More 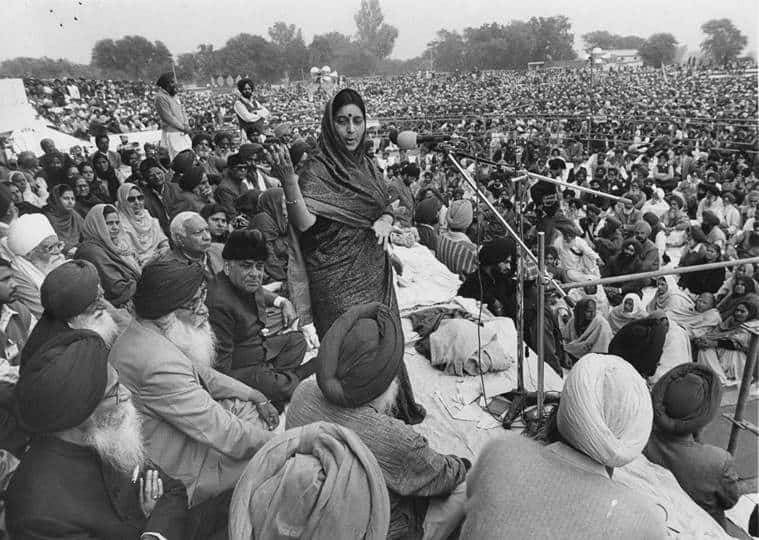 Saddened by the demise of Smt Sushma Swaraj Ji - Former External affairs Minister. I pray for the departed soul. My condolences to family members. Om Shanti...

Sushma Swaraj was an inspiration to many leaders: FM Nirmala Sitharaman

Political leaders across the country expressed grief over former EAM Sushma Swaraj's demise. FM Nirmala Sitharaman said she was an inspiration to many leaders https://t.co/UixXQXrl8B pic.twitter.com/XzgsVGBlZO

Recalling Sushma Swaraj as stateswoman extraordinaire, diplomat par excellence, Foreign Minister of Maldives, Abdulla Shahid said he was "deeply grieved" to hear the demise of Sushma Swaraj. "A warm human being. Key architect of renewed Maldives-India friendship. Sincere condolences to the bereaved family and people of India. May she rest in peace," he said.

Hamid Karzai: Saddened to hear of the loss of Behinji Sushma Swaraj

Hamid Karzai, former President of Afghanistan, expressed deep condolences on the demise of former external affairs minister Sushma Swaraj. "Deeply saddened to hear of the loss of Behinji Sushma Swaraj. A tall leader and a great orator and people’s person. My profound condolences to the people of India and her family and friends," he said.

Deeply saddened to hear of the loss of Behinji Sushma Swaraj. A tall leader and a great orator and people’s person. My profound condolences to the people of India and her family and friends. @narendramodi pic.twitter.com/fHT70dH58J

Ambassador of France to India condoled Sushma Swaraj's death and said that the leader took Indo-French relationship to new heights.

Ambassador of France to India: My heartfelt condolences to the family & loved ones of former EAM of India, Sushma Swaraj ji. One of India’s most respected leaders, she showed remarkable dedication to serving her fellow citizens & took the Indo-French relationship to new heights. pic.twitter.com/T7QhAS15Tl

A glorious chapter comes to an end: PM Modi on Sushma Swaraj’s demise

The Prime Minister said Sushma Ji was a prolific orator and outstanding Parliamentarian. Giving credit to her for BJP’s growth, PM Modi said, “She was uncompromising when it came to matters of ideology and interests of the BJP, whose growth she immensely contributed to.” Read More

Defence Minister Rajnath Singh said Swaraj rose through the party's ranks to become the external affairs minister and during her tenure she introduced a new sensitivity and sensibility in the ministry's functioning.  She was known as the people's minister, he noted.

‘Gone too soon, a lady who was people’s person’: Sports fraternity pay tribute

Her untimely demise led to an outpour of emotions on social media as members of the sports fraternity expressed shock and grief and recalled the moments when they got to interact with her. Read More

Sushma Swaraj to be cremated at 3 pm tomorrow

The mortal remains of former foreign minister Sushma Swaraj will be kept at her residence for people to pay last respects. Around 12 pm tomorrow, her mortal remains will be brought to BJP headquarters. At 3 pm she will be taken to Lodhi road crematorium, where her last rites will be performed with full state honours, said BJP working president JP Nadda.

Sushma Swaraj will be remembered for her service to people of India: President Ram Nath Kovind

Extremely shocked to hear of the passing of Sushma Swaraj. The country has lost a much-loved leader who epitomised dignity, courage, and integrity in public life. Ever willing to help others, she'll always be remembered for her service to people of India, said President Ram Nath Kovind

In a political career spanning over 40 years, Sushma Swaraj had many firsts in her stint with the BJP. She was the youngest Cabinet minister of Haryana at just 25 years of age and also the first woman chief minister of Delhi besides being the first minister to advocate ‘digital diplomacy’, as was evident with her prompt and round-the-clock presence on Twitter to help Indians abroad.

In 1977, Sushma Swaraj became the youngest cabinet minister, at the age of 25 years. In 1996, during the thirteen-day government under the leadership of Atal Behari Vajpayee, she took a revolutionary step of live telecasting of Lok Sabha debates as the union cabinet minister for Information and Broadcasting.