The bench said that only "green crackers" which have low emission and permissible sound limits can be sold through licensed traders, putting a ban on the e-commerce trade. 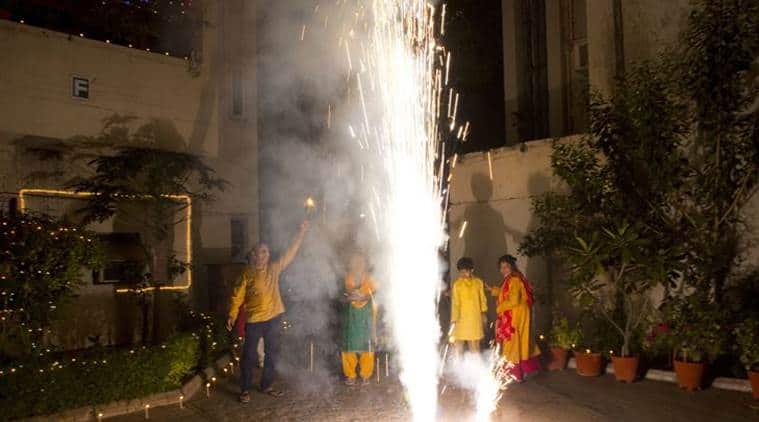 The bench also said that the station house officers of concerned police station will be held liable if banned crackers are sold in the area. (File)

The Supreme Court Wednesday declined to impose a complete ban on firecrackers across the country and instead put certain conditions on their sale and use on different occasions, including Diwali. A two-member bench said only “green crackers” — which have low emission and permissible sound limits — can be sold through licensed traders as it effected a ban on online trade of firecrackers. The court also said that e-commerce companies will be held for contempt of court if they failed to adhere to the court order.

Considering widespread air pollution concerns, the bench comprising Justices A K Sikri and Ashok Bhushan fixed a time duration for bursting crackers: between 8 pm and 10 pm on Diwali, and between 11.45 pm and 12.30 am on Christmas Eve and New Year. It also directed the Centre to encourage community cracker bursting during Diwali and other festivals in Delhi-NCR. The bench also said that the station house officers of police stations concerned will be held liable if banned crackers are sold in their respective areas.

Read | SC order on use and sale of firecrackers: All you need to know

The court had earlier reserved its verdict in the matter on August 28 earlier this year. The bench had expressed the need to take into account the fundamental right of livelihood of firecracker manufacturers as well as the right to health of over 1.3 billion people in the country.

SC Bench of Justices A K Sikri and Ashok Bhushan says says that on Diwali, the timing will be allowed bwteeen 8 pm and 10 pm. On Christmas and New Year, this will be from 11.45 pm to 12.30 am. Any violations would invite contempt, court warns. @IndianExpress

Citing the harmful effects of crackers on environment and health and the rising pollution levels, the petition filed by three children sought a countrywide ban on manufacture, sale and transportation of firecrackers.

Meanwhile, the firecrackers manufacturers had appealed for a strict regulation instead of an absolute ban on the use of firecrackers. Defending their case, they also argued that the crackers are not the reason for increase in air pollution and there are other factors, like wind and temperature, which contribute to it. They had further said the firecracker manufacturers cannot be deprived of their right to do business based on statements not supported by facts. The Centre, too, has opposed a complete ban on the sale of crackers during festivities across the country.

The Supreme Court had, on October 9 last year, temporarily banned the sale of firecrackers ahead of Diwali and refused to relax its order while dismissing a plea by traders who had sought permission to sell crackers for at least a day or two before Diwali on October 19, 2017. The apex court said its ban order during Diwali that year was an experiment to examine its impact on the pollution levels in the region.