Statue of Unity to be unveiled today: What the foreign press says on ‘world’s tallest statue’

From describing it as "a showcase of India's growing prosperity" to calling it an example of "BJP's efforts to appropriate a popular national figure", the Statue of Unity has received both praise and criticism. 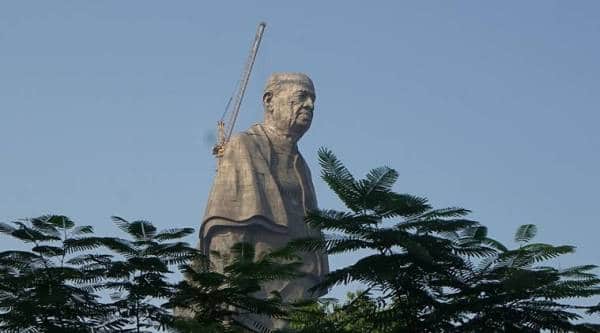 The Statue of Unity will be unveiled by Prime Minister Narendra Modi on Wednesday. (Express Photo/Bhupendra Rana)

The unveiling of India’s 182-metre statue of Sardar Vallabhbhai Patel in Gujarat Wednesday, which is set to become the “world’s tallest”, is being widely reported by the international media. From describing it as “a showcase of India’s growing prosperity” to calling it an example of “BJP’s efforts to appropriate a popular national figure”, the statue has received both praise and criticism. The State of Unity will be unveiled by Prime Minister Narendra Modi to mark Sardar Patel’s birth anniversary. The inauguration is expected to be a grand event planned along the lines of Republic Day celebrations in New Delhi.

The foundation stone of the Rs 2,989 crore project, erected on the banks of the Narmada in Gujarat, was laid in October 2013 by Modi, who was the chief minister of Gujarat at the time. It has drawn flak from tribals and farmers living in the region who were against the enormous cost of the project as well as land acquisition by the government. They will observe a “black day” Wednesday,

A report in the Washington Post states that the Statue of Unity “will give India bragging rights to the world’s tallest statue — a nearly 600-foot creation that says as much about India’s global aspirations as it does about the political ego of its leader”. It adds, “The $408 million gold-coloured colossus also spills over into present-day politics. It is considered a trifecta for Prime Minister Narendra Modi: a nod to his Hindu political base, a landmark site in his home state, and a showcase of the nation’s growing prosperity and status as a rising global power.”

Describing it as an unofficial launch of the BJP’s 2019 election campaign, it adds that “Modi seems to relish the big-splash attention of the projects.”

This report was carried by several organisations, including Canada’s National Post and Pakistan’s Dawn.

Pakistan’s Express Tribune states that the statue has “became an example of Modi’s Bharatiya Janata Party’s (BJP) efforts to appropriate a popular national figure, as Patel was a member of the Congress Party, which now sits in opposition to BJP in India’s parliament.” Geo News, meanwhile, calling it “a burst of nationalist fervour”, highlights that “there is also a political motive to the mega project, with India heading into a campaign for a national election early next year.”

The South China Post, which carries an AFP report, states that the “world’s biggest statue could quickly be outdone by a monument to a Hindu warrior king in the sea off Mumbai” referring to Chhatrapati Shivaji’s statue in Mumbai. The report adds that it overlooks the isolated Sardar Sarovar Dam, which was PM Modi’s pet project.

BBC has highlighted how local farmers are “aghast” that the government has spent so much money on the statue. It quotes a local farmer saying, “Instead of spending money on a giant statue, the government should have used it for farmers in the district.” It refers to a 2016 government report which says the Narmada district is home to several residents who live in hunger, while primary school enrolment is falling and malnourishment persists.