Investigators, meanwhile, suspect that Hashim broke away from the Lanka-based National Thowheeth Jamaath, which has been blamed for the blasts, to form his own outfit recently. A police officer inspects the site of a gun battle between troops and suspected Islamist militants, on the east coast of Sri Lanka. (Reuters)

Intelligence agencies are tracking over a dozen men from Tamil Nadu and Kerala whose phone numbers were found in the Call Detail Records (CDRs) of Zaharan Hashim, the suspected mastermind behind the Easter Sunday blasts in Sri Lanka, a security official told The Indian Express.

Hashim is believed to have spent close to three months in India, possibly from late last year, and the CDRs pertain to this period and the months since his return to Lanka, the official said. Hashim was among the group of suicide bombers that targeted churches and hotels across Sri Lanka, killing over 250 people.

On Monday, as part of its probe into Hashim’s India links, the National Investigation Agency (NIA) arrested one of the three men from Kerala, who were detained Sunday, on suspicion of being an Islamic State (IS) recruit and “for conspiring to commit a terrorist act”.

The agency identified the man arrested as Palakkad resident Riyas Abubakar alias Abu Dujana. “He has disclosed that he has been following speeches/videos of Zaharan Hashim… for more than a year and has also followed the speeches of (Islamic preacher) Zakir Naik. He admitted that he wanted to carry out a suicide attack in Kerala,” NIA IG Alok Mittal said.

Investigators, meanwhile, suspect that Hashim broke away from the Lanka-based National Thowheeth Jamaath, which has been blamed for the blasts, to form his own outfit recently. 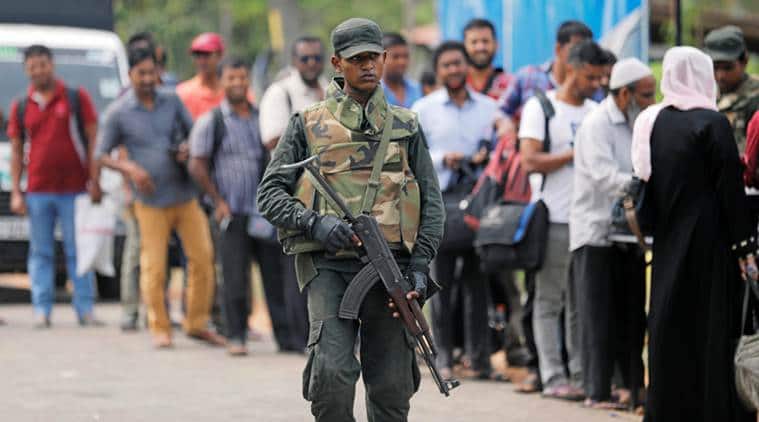 Sri Lankan army personnel stand guard as they search people and their bags at a checkpoint in Kattankudy near Batticaloa. (Reuters)

“The group was named Nation of Thowheeth Jamaath, perhaps alluding to the idea of a Caliphate. He got around 35 young men to join him. The suspicion is that it is these people who carried out the attack,” a security official said. The NTJ had issued a statement condemning the blasts.

On Sunday, the NIA arrested Riyas after raiding his house in connection with the 2016 case of 22 Kerala youths leaving for Afghanistan to join the IS — and found that he was allegedly in touch with one among that group.

“He has disclosed that he has been in online contact with absconding accused Abdul Rashid Abdulla @ Abu Isa for a long time and has been following his audio clips, including the clip which he had circulated on social media instigating others to carry out terror attacks in India,” an NIA statement said. Abdulla is believed to be in Afghanistan.

According to the NIA, Riyas was also chatting online “with Abdul Khayoom alias Abu Khalid who was believed to be in Syria”. Khayoom is an accused in the IS case from Valapattanam linked to the group that left for Afghanistan.

Sources said the Hashim video with Riyas was similar to the one retrieved from the phones of six IS suspects detained in Coimbatore last September. “In the video, Hashim is seen asking Muslims to join his cause of forming an Islamic Wilaya (province) in the region,” sources said. 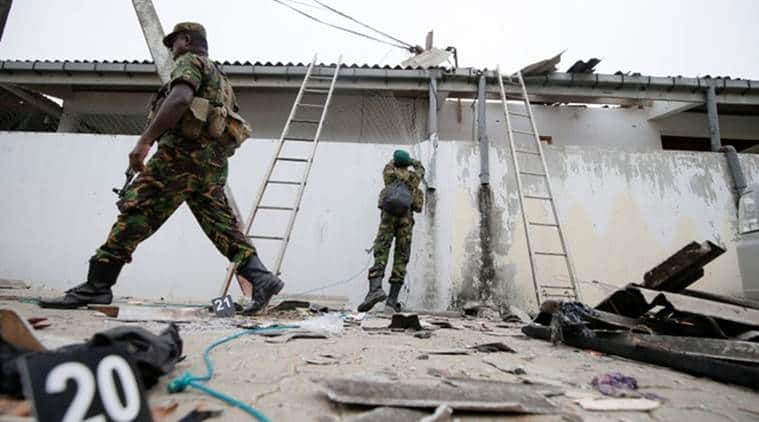 Security personnel seen at the site of an overnight gun battle between troops and suspected Islamist militants, on the east coast of Sri Lanka, in Kalmunai. (REUTERS)

The Coimbatore case was transferred to the NIA last December, and the agency found the video while drafting the chargesheet this year.
“The suspect had deleted the video, which was retrieved by forensic experts. The input was shared with the Research and Analysis Wing (R&AW), which developed it and gave Sri Lanka the specific input on April 4 of an impending attack,” an intelligence official said.

Apart from Riyas in Palakkad, the NIA searched the houses of two others in Kasaragod for their suspected links with the group that left for Afghanistan — some of them via Sri Lanka and Iran.