Meanwhile, the Delhi Police on Wednesday detained Congress leaders, including MP Manish Tewari, as they protested against the ED's questioning of Sonia Gandhi.

Congress President Sonia Gandhi leaves from her residence to appear before the Enforcement Directorate for questioning in connection with the National Herald case, in New Delhi, Wednesday, July 27, 2022. (PTI Photo)

Meanwhile, the Delhi Police on Wednesday detained Congress leaders, including MP Manish Tewari, as they protested against the ED’s questioning of Sonia Gandhi.

Speaking at a press conference earlier in the day, Rajasthan CM Ashok Gehlot stated, “They called Rahul Gandhi for five days… now they have called Sonia Gandhi for the third time. The ED has created terror in the country.” Veteran leader Anand Sharma stated that laws shouldn’t be “weaponised” to “target and humiliate”, while Ghulam Nabi Azad said the ED should bear in mind Sonia’s age and health issues.

Congress leaders in Kerala on Wednesday marched to the Governor's residence, Raj Bhavan, here to protest against the continued questioning of party chief Sonia Gandhi by the Enforcement Department (ED) in the National Herald newspaper-linked money laundering case.

Senior Congress leaders, including Leader of Opposition in the state assembly V D Satheesan and former minister Ramesh Chennithala, who participated in the protest were subsequently arrested and removed from the area, police said.

An officer of Museum police station said all of the arrested Congress leaders were later released on station bail. (PTI)

Congress Leaders Veerappa Moily, Ramalinga Reddy, NA Haris and others during a silent protest in support of AICC President Sonia Gandhi, who appeared before the ED (Enforcement Directorate) in connection with the National Herald case, in Bengaluru.

#UPDATE | All Congress MPs and leaders that were detained and kept at Kingsway Camp in Delhi have now been released from there.

ED questions Sonia Gandhi for over 3 hours on day 3

The Enforcement Directorate (ED) on Wednesday questioned Congress president Sonia Gandhi for over three hours on the third day of her deposition in the National Herald newspaper linked money laundering case. No fresh summons were issued, officials said.

Sonia Gandhi reached the federal agency's office in central Delhi at 11 am accompanied by her daughter Priyanka Gandhi Vadra and son Rahul Gandhi.

The session began around 11.15 am. The team of investigators included the main probe officer and a person who took down statements dictated by the Congress chief.

Congress leaders were detained by the police amid protests over ED's questioning of Sonia Gandhi and price rise.

Congress workers protesting against ED's questioning of Sonia Gandhi were detained by the police on Wednesday outside the AICC headquarters. The workers were also heard raising slogans against the PM Modi-led government.

#WATCH | Congress workers detained by Police while protesting against ED questioning of Sonia Gandhi outside AICC office in Delhi pic.twitter.com/vsb3C8nnsi

Congress workers on Wednesday chanted "Raghupati Raghav Raja Ram" while protesting outside the Enforcement Directorate's office in Nagpur against the questioning of party chief Sonia Gandhi by the probe agency.

A number of Congress leaders and workers gathered outside the ED's office in Seminary Hills area here in Maharashtra to express solidarity with Gandhi, who recorded her statement for the third time before the agency in Delhi in a money laundering case linked to the National Herald newspaper.

The Congress workers sat in front of the ED's office here and chanted "Raghupati Raghav Raja Ram" - words from a devotional song which had been popularised by Mahatma Gandhi.

They also raised slogans against the BJP-led central government. (PTI)

Speaking to news agency ANI, Congress MP Manish Tewari said, "We want to raise the voice of the common people in Parliament. We were moving towards Rashtrapati Bhavan but were stopped by Police. We have been detained."

We want to raise the voice of the common people in Parliament. We were moving towards Rashtrapati Bhavan but were stopped by Police. We have been detained: Congress MP Manish Tewari pic.twitter.com/Eg2AV0ebpx

Delhi Police detained workers of the Congress party outside the AICC headquarters in Delhi as they protested against the ED's questioning of Sonia Gandhi on Wednesday.

Congress leaders on Wednesday took out a march on Vijay Chowk in Delhi, protesting against the ED's questioning of party chief Sonia Gandhi.

Gandhi family should answer to agencies... not above law: BJP chief JP Nadda

BJP chief JP Nadda on Wednesday hit out at the Gandhi family, stating that they are not above law and are required to answer to agencies. "This isn't a satyagraha but an attempt to hide the truth. Congress is protesting to protect a family, not the country. This family thinks they are above the law and the country. They can't accept that someone can question them" he added.

#WATCH | Congress protests not 'Satyagrah', but an attempt to hide the truth. They are protesting to protect a family, not the country. Gandhis required to answer the investigation agencies, but they think they are above the law: BJP President JP Nadda pic.twitter.com/ump5p9K8Ff

At a press conference Wednesday, Congress leader Anand Sharma stated that he has noticed a "disturbing trend", where laws are being made "more and more draconian, which threaten the foundational values of the Indian Constitution." "The weaponisation of laws and their use to target and humiliate should not exist," he added.

ED has all papers, they have questioned Rahul... why call Sonia?: Ghulam Nabi Azad

Stressing upon the old age and health issues of Congress president Sonia Gandhi, veteran party leader Ghulam Nabi Azad stated that the ED has all necessary papers and documents that they have been investigating over the years. "They have also questioned Rahul Gandhi... then why call Sonia Gandhi?" Azad asked. She is old and has been unwell since contracting Covid, he added.

Sonia Gandhi arrives at ED office for third round of questioning

Congress chief Sonia Gandhi arrived at the ED office for the third round of questioning on Wednesday. She was accompanied by Priyanka Gandhi.

Delhi | Congress interim president Sonia Gandhi accompanied by her daughter Priyanka Gandhi Vadra arrives at the Enforcement Directorate office for the third round of questioning in the National Herald case pic.twitter.com/tmnUsjSXuB

Speaking at a press conference on Wednesday, Rajasthan Chief Minister Ashok Gehlot said, "The ED is creating drama in the country. They called Rahul Gandhi for five days... now they have called Sonia Gandhi for the third time. The ED has created terror. Supreme Court should decide quickly on the matter (of Money Laundering Act)."

"The ED is being used to collapse governments... as you saw in Maharashtra. You can see where democracy is going," Gehlot added.

Congress Sevadal workers on Wednesday morning protested at the AICC headquarters in Delhi against the ED's questioning of the party's interim president Sonia Gandhi.

Congress Sevadal workers protest at AICC headquarters in Delhi against the questioning of the party's interim president Sonia Gandhi by the ED pic.twitter.com/uBBMFrv3us

‘King’ will never be able to break our spirits: Rahul Gandhi targets PM Modi after being detained

Targeting Prime Minister Narendra Modi after being detained amid protests against the Enforcement Directorate’s questioning of Congress president Sonia Gandhi, party leader Rahul Gandhi on Tuesday alleged the “king” of the country has ordered to put those asking questions on unemployment, inflation, GST and Agnipath in jail.

“The country’s ‘King’ has ordered — whosoever asks questions on unemployment, inflation, wrong GST, Agnipath — put them in jail. Even though I am in custody now, even though it may be considered a crime to raise the voice of the people in the country now, they will never be able to break our spirits,” Gandhi tweeted in Hindi.

The Congress leader earlier took potshots at the ruling dispensation for “dictatorship”. He alleged that they were not being allowed to hold discussions inside Parliament and the leaders were arrested during protests. Read more 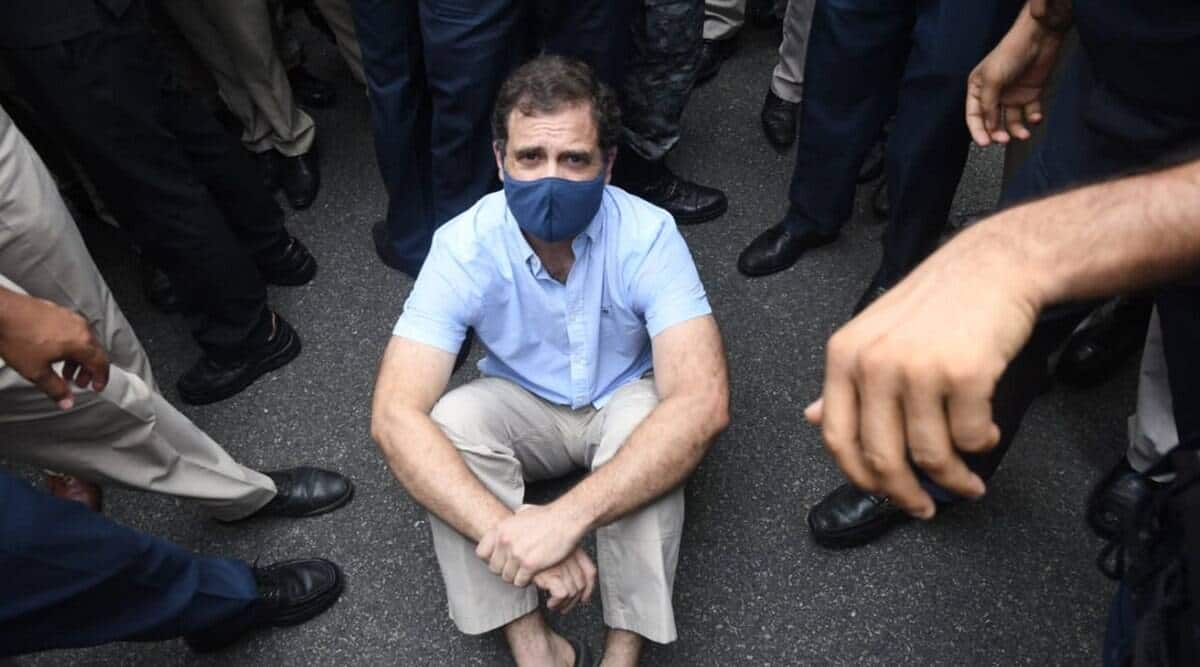 Sonia Gandhi to appear before ED for third day

The ED's questioning of Sonia Gandhi in connection with the National Herald case lasted around six hours on Tuesday.

She has been asked to appear before the probe agency for the third time on Wednesday.

With the Enforcement Directorate having summoned Sonia Gandhi for questioning again, the Congress will field veterans Ghulam Nabi Azad and Anand Sharma on Wednesday to defend the party chief and attack the BJP government.

Both of them were conspicuously missing when the party waged street protests last month during Rahul Gandhi’s questioning. Read more

Speaking to The Indian Express on the National Herald case in connection with which Sonia Gandhi is being questioned by the ED , senior Congress leader Mallikarjun Kharge said, "The Congress only gave financial assistance to a newspaper which had played a role in the freedom movement. She just wanted to keep that great institution alive. ‘Young Indian’ is a not-for-profit company that only runs the ‘National Herald’ paper. No one can draw a single rupee of profit, salary or dividend from it, or benefit from it in any manner."

"They (government) know all that but they just want to harass and create an atmosphere of fear and demoralise (Congress) workers," he said. Read the full interview here

As the Enforcement Directorate (ED) questioned Congress president Sonia Gandhi — her second appearance before the agency within a week — senior leaders and party MPs staged protests in Delhi and elsewhere in the country.

Several MPs of the party, including former Congress president Rahul Gandhi, were detained by police outside Parliament as they tried to take out a march to Rashtrapati Bhavan.

The Congress MPs met in Parliament and then decided to take out a march to the President house. It would have liked other opposition leaders to join but that did not happen. The MPs including Rahul and Leader of the Opposition in Rajya Sabha Mallikarjun Kharge were stopped by the police at Vijay Chowk and taken to the Kingsway Camp police station. The police used mild force to put some of the MPs in waiting buses.

Explained: What are the ED and IT cases against Rahul and Sonia Gandhi?