A clash between Sidi tribals and Ahirs is steadily taking communal overtones, thanks to overworking politicians in poll season. 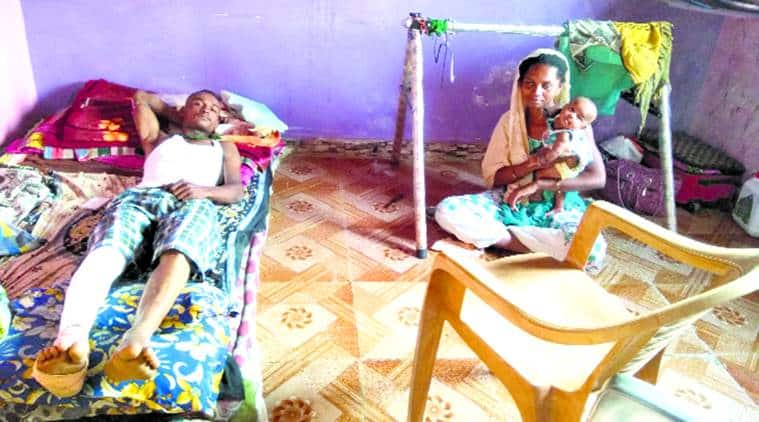 Akram Majgul, whose leg was broken in the clash, and his wife and child at their Jambur village home. (Express Photo:  Gopal Kateshiya)

The part of Saurashtra, showcased as a “little bit of Africa in Gujarat”, is tense for the last one week.  On October 28, a violent clash erupted between the Sidis — an ethnic tribal group with African descent — and the Ahirs, a farming community that comes under the OBC, over a minor issue at Gundaran in Talala taluka of Gir Somnath district. But what began as a clash between the two groups is steadily taking communal colour ahead of the Assembly elections in the state.

For the first time in many years, the Sidis, who are Scheduled Tribes in Gujarat, feel alienated, finding no political backing. Local BJP leaders have come out in support of the Ahirs, exhorting the “majority Hindus to unite” against the Sidis, most of who practise Islam. And many Sidis have fled from their homes at Jambur village after police crackdown in which 60 people were arrested — out of which 43 were Sidis, including nine women. The arrested Ahir youths, on the other hand, are out on bail. 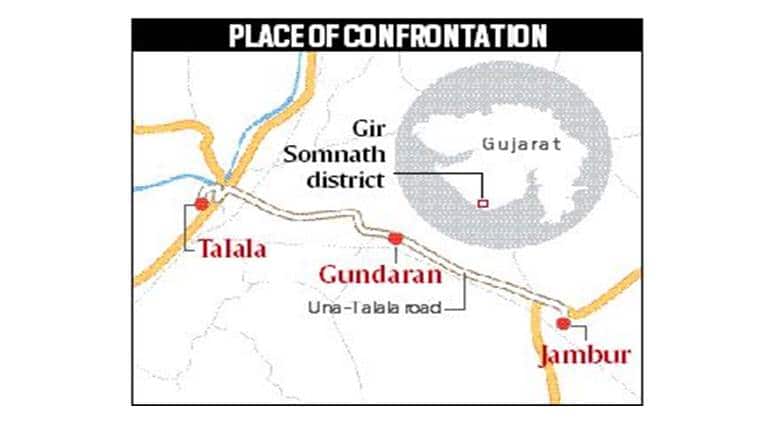 From tiff to clashes

The trouble began on October 28 afternoon when Aslam, a Sidi resident of Jambur village, was allegedly waylaid by fellow tribals while he was on his way to Rasulpara village on a motorbike that he had borrowed from his friend Paresh Solanki, a 20-year-old Ahir from Gundaran.

Police say that Sidi youths prevented Aslam from returning the vehicle, and then reportedly dared Solanki over phone to personally come to Jambur to take back his motorbike. “After the verbal exchange over phone, a group of 12 to 15 Sidi youths from Jambur reached Gundaran and confronted with Solanki at a paan shop. An angry Solanki took away the keys of a bike that belonged to one Akram Majgul, a Sidi youth of Jambur, leading to a violent clash,” say sources at Talala police station.

In the clash, one Hitesh Timbadiya, a Patidar from Talala, who had stopped at the shop to have paan, was also injured. Based on a complaint filed by Timbadiya, police booked 10 to 12 Sidi youths of Jambur on charges of rioting.
Akram (22) also lodged a cross complaint, naming Solanki, and eight other Ahir youths from Gundaran.
“While I was on my way to Sasan to perform dhamal (a traditional dance of Sidi tribe) at a hotel, I stopped at Gundaran to buy paan, when Solanki snatched my bike keys and beat me up as well as my nephew Hazrat,” Akram said in his complaint.

He claims that he managed to escape and returned to Jambur hitching a ride on a truck. “Since I was injured, we called for an ambulance. My mother Sharifa, step-mother Mumtaz and cousin Sohil accompanied me in the ambulance. But at Gundaran village, a mob stopped the ambulance and attacked me with steel pipes and clubs. They also assaulted my mothers and Sohil,” says Akram who has studied till Class VIII.

While Mumtaz escaped with minor injuries, Akram, Sharifa and Sohil were referred to Junagadh Civil hospital. While Sharifa received fractures in here left ankle, Akram’s right leg was broken in the assault. “They discharged me on October 30. I went to my relative’s place at Shirvan (a settlement inside Gir forest) and stayed there for a couple of days as I felt it was not safe here,” says Sharifa, who has now returned to her home at Jambur village.

On October 29, the violence escalated after a Sidi auto-rickshaw driver was allegedly beaten up by the Ahirs at Gundaran. After that, the Sidis went on a rampage as they blocked Talala-Una state highway, targeted vehicles and allegedly pelted stones at police, injuring a DSP and three other policemen.
In response, police used batons, lobbed tear-gas shells and fired in the air to disperse the mob. Police detained 31 people, including seven women. But the Sidis allege that police indulged in vandalism during the crackdown on the community that Sunday afternoon.

According to Aayshuben Makwana, a member of Gir Somnath district panchayat, policemen barged into her home and slapped her. “On their way out, policemen told me that women constables will soon arrive, and asked me to give a statement that rioters had broken the window panes of my house,” says Makwana, who as Congress nominee had defeated her BJP rival from the tribal Rabari community in the 2015 panchayat election.

Her husband, Bachu Makwana, who is the president of Nagarchi Pir dargah — a religious shrine of the Sidis at Jambur, was beaten police, who let him go only when he insisted that he was a community elder. According to him, at least three dozen tribals have left the village to stay at their relative’s place.

According to police, the Sidis had blocked the road and attacked police, and therefore they had to use force. “If there are any complaints of excesses by policemen, we shall probe those as well,” Superintendent of Police (Gir Somnath) Hitesh Joysar says.

Till Wednesday (November 8), police had filed five FIRs and arrested 60 people in connection with the violence. Of those arrested, 43 belong to the Sidi community, and have been booked for attempt to murder, attacking police, rioting and under other charges. Based on the complaints filed by Akram and Juma Majgul, the 32-year-old auto-rickshaw driver who was attacked allegedly by a mob of the Ahirs, 17 Ahir youths were arrested on charges of atrocities. But they are out on bail now.

But the Congress president says he advised people not to communalise the incident. “I told it was a dispute between groups of anti-social elements in both communities and insisted that it should be viewed as such. I suggested that nobody should take sides and should allow police to do their job,” Barad says.

The following day on October 30, BJP MLA of Talala, Govind Parmar, led a silent march of the “Hindus” at Talala town, demanding setting up of a police outpost at Jambur. Gundaran and Jambur are part of Talala Assembly constituency. The seat has traditionally been a Congress stronghold, but BJP won the seat in last year’s bypoll that followed the death of Congress MLA Jashubhai Barad.

Talala Mamlatdar Bharat Shrimali, however, refuses to term the violence as a communal incident. “Prima facie, the violence was result of a dispute between two groups, and not of communal tension. That’s the reason it did not spread to any other villages,” said the officer last week, adding, there has been no untoward incident in the last one week.

Many Sidi youths were hesitant to return to Jambur. Juma, too, did not return to his home for around a week and camped with his uncle at Talala. “I don’t know if it is safe… Police, of course, must catch the guilty from both sides. But we are like guests here in India. We don’t have any political leader to speak for us. The state government must protect us or they may well send us back to Africa,” he says.

There are around a dozen Ahir families in Madhupur, a village separated from Jambur by river Saraswati. Bhimsi Barad, former sarpanch of the joint Madhupur-Jambur village panchayat, says the Sidis have coexisted with the Patels, the Ahirs and the Kolis of Madhurpur for decades. “But there are a few anti-social elements who are creating trouble and giving a bad name to the Sidi tribe now. They would get drunk and then speed on their bikes, leading to road accidents regularly. Such behaviour is unacceptable,” says the former sarpanch.

Together, Madhupur and Jambur have a population of 4000, half of whom are Sidis. Four of the 11-member of Madhupur-Jambur village panchayat are Sidis, including vice-sarpanch Ahmed Darjada. “But no politician of note speaks for us. We have no political leader who can voice our concerns,” says Rashid Chauhan, a Sidi who practices law in Talala.

The Sidis are believed to have settled in coastal Junagadh and Gir Somnath at least for the last 400 years. Saurashtrana Sidio (Sidis of Saurashtra), a book published by the Gujarat government in 2012, gives various theories as to how the Sidis, an African tribe, came to Gujarat. According to one of the theories, they came with the invading army of Mohammed Ghazni, a Turkish conqueror who invaded India 17 times between 1000 AD to 1027 AD. According to another theory, the Sidis were brought to India by Portuguese and British as slaves. The third theory says that they were brought here by traders who used to sail to Africa. Bharuch in south Gujarat also has a Sidi settlement, and is said that the first Sidis arrived here in India in 628 AD.  Most of them practise Islam, and earn their livelihood by working as labourers. Their population is estimated at less than 20,000 in Gujarat. The community fares poor in education.  The Sidis are famous for their dhamal dance, which is featured at many government events.  They are also settled in Karnataka and Hyderabad.