SAD president Sukhbir Singh Badal said BSP would contest 20 of the 117 seats in the polls. The two parties are joining hands 27 years after the 1996 Lok Sabha elections. 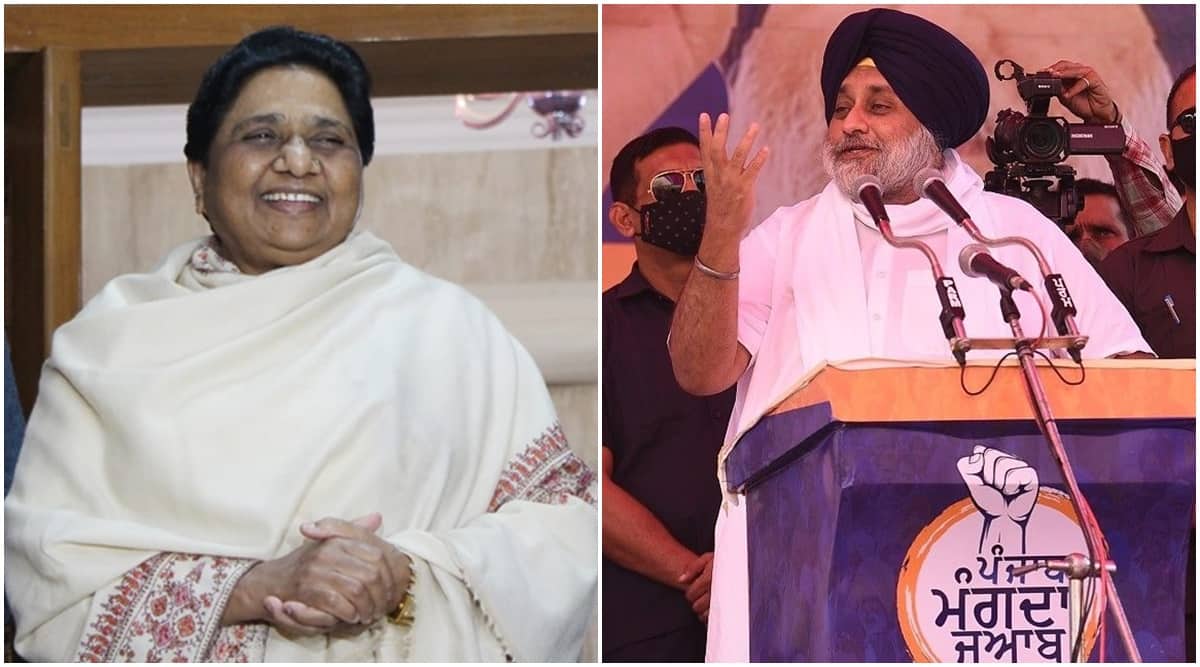 Sukhbir Badal's Shiromani Akali Dal and Mayawati's BSP will be coming together after 27 years. (File Photos)

Shiromani Akali Dal (SAD) and Bahujan Samaj Party (BSP) Saturday stitched an alliance to contest the 2022 Assembly elections in Punjab. While BSP chief Mayawati dubbed the alliance as a “new political and social initiative” which will usher in progress and prosperity in Punjab, Akali Dal president Sukhbir Singh Badal termed it as a “new day” in the state politics.

The two parties have joined hands after a gap of 25 years after having contested the 1996 Lok Sabha polls together when they had won 11 out of 13 seats in Punjab.

He said out of the 117 Assembly seats, the BSP will contest on 20 — eight from dalit-dominated Doaba region, seven from Malwa, and five from Majha belt.

Punjab has 31.94 per cent Dalit population, mainly concentrated in Jalandhar, Hoshiarpur, Nawanshahr and Kapurthala districts. The border state has the highest percentage of Scheduled Castes population in the country.

The Akali Dal had been contesting Assembly elections in alliance with the Bharatiya Janta Party since 1997 by giving the saffron party 23 seats. It walked out of the alliance in September last year in protest against the three contentious farm laws.

A flex board with the slogan ‘Soch Vikas Di, Nawen Punjab Di (A thinking of development, of new Punjab)’ forming the backdrop during the press conference at SAD headquarters in Chandigarh, Sukhbir said, “The relationship, which was formed 25 years ago by (SAD patron) Parkash Singh Badal and BSP founder Kanshi Ram has been revived”.

Mishra said the the alliance “will continue forever” now. “This day will go in the annals of history. Each BSP worker supports and welcomes this alliance. SAD and BSP are pro-farmer parties, who have worked for upliftment of dalits, labourers, weaker sections… This alliance will form the next government,” he said.

In 2017 Assembly elections, BSP had contested on 111 seats and all but one candidate ended up forfeiting their deposit. The only candidate who didn’t lose his deposit was then state BJP chief Avtar Singh Karimpuri, who lost from Phillaur, finishing at number four-

After the alliance was announced, Sukhbir and Mishra went to meet Badal Sr, who had a telephonic conversation with Mayawati.

Terming the alliance as “a new political and social initiative, which will surely usher in a new era of much-awaited development, progress and prosperity of the people in the state”, in a tweet in Hindi, The BSP supremo said, “Although every section of the society in Punjab is suffering from poverty, corruption and unemployment, etc. under the Congress party’s rule, it is the dalits, farmers, youth and women who have been hit the most. It is very important for us to make this alliance a success”.

SAD stalwart and former CM Parkash Singh Badal described the alliance as “the beginning of a secular, federal democratic revolution in the state and the country for a total socio-economic and political revamp of polity”.

He said, “The alliance is a tribute to the composite vision of Guru Nanak Dev, Guru Ravidas and Bhagvan Balmiki and great saints and seers. That makes today the happiest day of my long political career as it marks the triumph of the concept of ‘Sarb Saanjhivalta’, ‘Sanman te Smajik Insaf’ (fraternity, equality and dignity) based on the ideal of ‘Sarbat da Bhala’ (welfare of all).”

Sukhbir said the “thinking” and “mission” of both SAD and BSP was same, to work for the “under-privileged, downtrodden, labourers and the economically weaker sections of the society.”

While stressing on the need to bring Punjab’s economy “back on track”, Sukhbir said, “We are sure we will register a victory.” He also lashed out Congress government in Punjab, alleging that the welfare schemes for the dalits were “either discontinued or scaled down”.

On his part, Mishra pointed out that SAD MP Harsimrat Kaur Badal had quit the Union cabinet while objecting to the farm laws which were aimed at “snatching” farm lands. “SAD-BSP alliance would ensure that the black farm legislation would not be implemented,” he added.

Apart from Congress, he also hit out at Aam Aadmi Party (AAP) saying that it first welcomed the bills, but retracted from its stance after farmers were out on roads. “There is a need to be wary of such people..we will expose their real face before the public,” he said.

Mishra accused Captain Amarinder Singh-led government of doing “dsicrimination with dalits”. He alleged that funds meant for the dalits had been “diverted”.

The struggle to make Raiders of the Lost Ark: Why every studio rejected George Lucas’ film