Despite massive protests by the Dalit community and Centre's review petition, the top court has refused to stay its order and asked all parties to submit detailed replies before the next hearing. 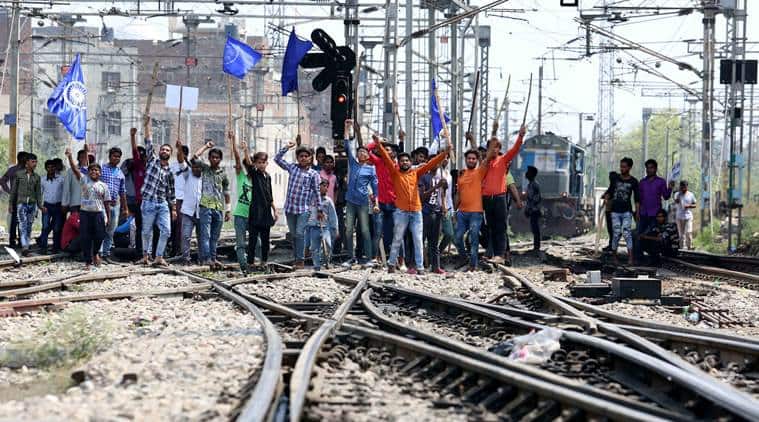 The BJP-led government at the Centre has become a target of its own party MPs who have expressed disappointment over the alleged atrocities and caste discrimination against the Dalits across the country. The party is now grappling with a rising voice of discontent among its own members, mostly belonging to the Scheduled Castes in Uttar Pradesh, over the alleged delay in filing a review petition against the Supreme Court’s March 20 order that laid down stringent safeguards before registering a case under the SC/ST (Prevention of Atrocities) Act.

Despite massive protests by the Dalit community and Centre’s review petition, the top court has refused to stay its order and asked all parties to submit detailed replies before the next hearing. Till now, four BJP MPs have share their views on the discontent among Dalits both in the party as well as in the country.

Udit Raj, BJP MP from north-west Delhi is latest to join other Dalit colleagues to express publicly his unhappiness over the “torture” being meted out to the Dalits in the wake the violent protests following the Bharat Bandh which took place last week. “Reports are pouring in that those Dalits who participated in agitation on April 2 are being tortured and it must be stopped,” the MP posted on Twitter.

“Dalits are tortured at large scale after April 2 country-wide agitation. People from Barmer, Jalore, Jaipur, Gwalior, Meerut, Bulandshahr, Karoli and other parts calling that not only anti-reservationists but police also beating and slapping false cases,” he added.

The BJP leader also claimed that a worker of a Dalit organisation, run by him in Gwalior, was tortured for no fault of his own. He alleged that the atrocities were taking place mostly in BJP-ruled states.

Before Udit, the government was targeted by another MP who said that despite completing four years in power, the government has done nothing for the nearly 30 crore Dalits of the country. In a letter to Prime Minister Narendra Modi on April 2, Yashwant Singh, MP from Bijnor’s Nagina constituency in Uttar Pradesh, alleged that despite assurances, Dalits are yet to receive benefits of reservation, including in jobs and promotions.

“When I was elected, then only I had met you and requested that it should be ensured that a bill on reservation be passed. Different organisations kept requesting us… but even after four years, nothing has been done by your government to actively benefit around 30 crore Dalits of the country…” the letter read.

A member of the Jatav community, Singh, who has an MD degree from AIIMS, said he had “become an MP only because of the reservation system”. He claimed reservation was “like the air that gives life” to people like him, and without it, Dalit and backward communities would not exist.

Etawah MP Ashok Kumar Dohre also shot a letter to the prime minister, alleging that Dalits in Uttar Pradesh were being pulled out of their homes and beaten. He also accused the state police of registering false complaints against them. “Casteist comments were also being hurled at them,” Dohre said, while demanding stringent action against the police officials.

Just hours before Dohre dashed the letter to the prime minister, BJP Dalit MP from Robertsganj alleged caste discrimination by the Yogi Adityanath government and local party unit and said he was “scolded and thrown out” by the chief minister twice when he approached him with his grievances.

In his letters written last month, a copy of which is with The Indian Express, Robertsganj MP Chhote Lal Kharwar alleged his brother Jawahar Kharwar was removed as block president of Naugarh in Chandauli district last year on the back of a no-confidence motion in the block development council “fuelled by upper caste BJP leaders”. He also alleged that the local BJP unit had helped a SP-BSP-backed candidate win the post last month.

“This is such a shame… The only fault, making a Dalit the president of a general seat,” he wrote. He claimed he had approached BJP’s district office-bearers, BJP general secretary (organisation) Sunil Bansal, Chandauli MP and BJP state president Mahendra Nath Pandey and the chief minister in the matter but in vain. “Mukhya Mantri se bhi do bar mila lekin madad nahi mila, daant ke bhaga diya gaya (I also twice met the Chief Minister, but got no help, was scolded and thrown out),” he wrote. He claimed the state government singled him out for encroachment.

“After I complained to the state government about rampant misuse of forest land by powerful people, my house in Chandauli was declared built on encroached land by the forest department while other houses nearby were overlooked,” Kharwar told The Indian Express. He alleged that his complaint on being threatened and abused by an “upper caste bhumafiya (land grabber)” named Suddu Singh last year was also ignored.

Political pundits believe that the brewing discontent among the BJPs Dalit MPs may have serious repercussion for the saffron party as they are all from UP, which has the largest population of the community and also maximum, 80, Lok Sabha seats. Already faced with the challenge of a likely formidable alliance of the Samajwadi Party and the BSP, the discontent among its Dalit MPs is bound to add to the BJP’s woes as it prepares for the Lok Sabha polls next year.

Amid increasing unrest within the BJP and the Dalit community, PM Modi recently asked his party’s MPs to spend at least two nights in Dalit-dominated villages and “restore” the faith of the community in the BJP. The prime minister’s call on the party’s 38th foundation day came even as BJP president Amit Shah reiterated at a rally in Mumbai that the party would not let the reservation policy be scrapped. “The Prime Minister asked all party MPs to spend two nights in villages between April 14 (the birth anniversary of B R Ambedkar) and May 5. He told them to pick at least one village with over 50 per cent population of SCs,” said a BJP MP who attended the meeting.

According to sources, the Prime Minister pointed out that there are “more than 20,000 such villages in the country”.

Concerned over the potential electoral damage — the Dalit community is widely believed to have backed the BJP in several elections since the 2014 Lok Sabha polls — the Prime Minister and the party chief seem to be engaged in a damage-control exercise. The party has also asked its MPs to celebrate Jyotirao Phule’s birthday on April 11.