3 women judges among nine names cleared by Collegium for SC

The Indian Express has learnt that the Collegium, for the first time, has recommended the names of three women judges – Justice B V Nagarathna of the Karnataka High Court; Justice Hima Kohli, Chief Justice of the Telangana High Court; and Justice Bela Trivedi of the Gujarat High Court – for elevation to the Supreme Court. 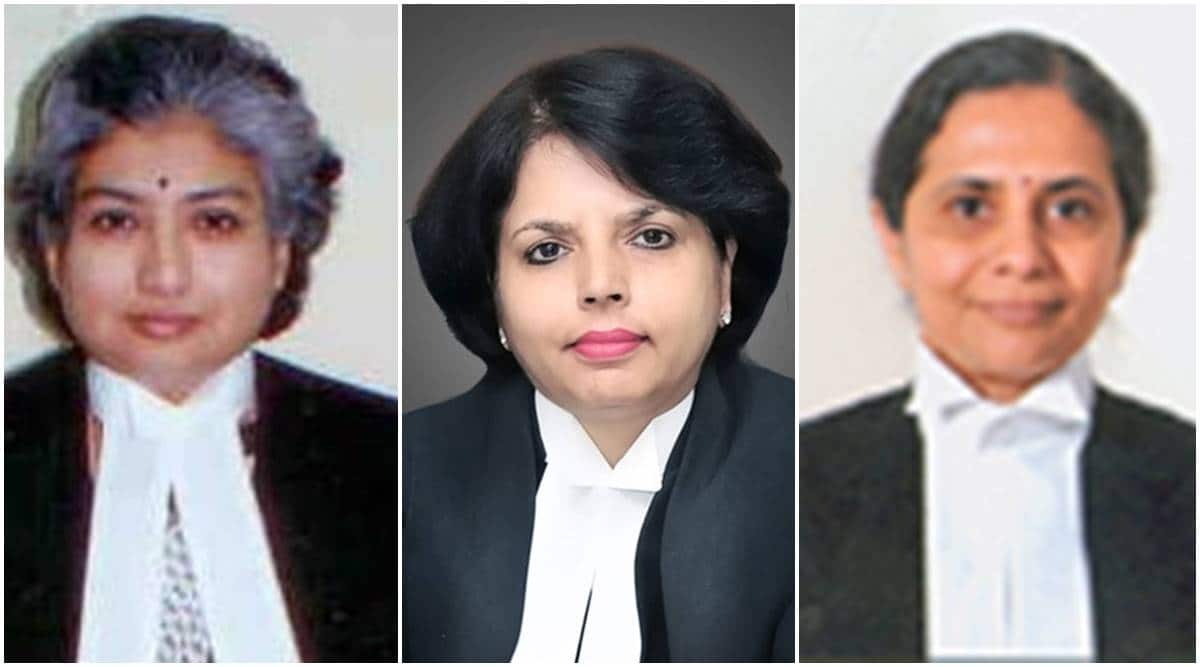 From left to right: Justice B V Nagarathna, Justice Hima Kohli, and Justice Bela Trivedi of the Gujarat High Court.

ENDING THE unprecedented 22-month-long impasse, the Supreme Court Collegium headed by Chief Justice of India N V Ramana is learnt to have recommended nine names to the government on Tuesday for appointment as judges to the top court. The list has three women judges, including one who could become the first woman Chief Justice of India.

Significantly, the breakthrough comes just days after Justice Rohinton Nariman retired from the Supreme Court. Justice Nariman, who was a Collegium member since March 2019, is said to have been firm in his stand that no consensus could emerge on the names unless the two most senior judges in the all-India seniority list for high court judges – Karnataka High Court Chief Justice Abhay Oka and Tripura High Court Chief Justice Akil Kureshi – were recommended first.

The Indian Express has learnt that Justice Oka, along with Justices Vikram Nath and J K Maheshwari – the Chief Justices of the Gujarat and Sikkim High Courts respectively – have been picked by the Collegium.

Justice Nath also headed the Gujarat HC’s intervention on the government’s handling of the pandemic, raising questions on issues including lack of hospital beds and availability of essential drugs. He brought in the first-ever live telecast of a courtroom, streaming the hearings on the Covid crisis on YouTube.

Justice Maheshwari, who was earlier the Chief Justice of the Andhra Pradesh High Court, was transferred to Sikkim in December last year, just days after Chief Minister Y S Jagan Mohan Reddy alleged that a senior judge of the Supreme Court was interfering in the functioning of the high court to topple his government.

From the Bar, former Additional Solicitor General P S Narasimha is the Collegium’s pick for the apex court. The senior advocate has appeared in several important cases, including the Ram Janmabhoomi case, and was appointed an amicus by the Supreme Court in the BCCI matter for resolving disputes related to cricket administration in India.

The recommendations, if accepted, will fill all current vacancies in the Supreme Court, and will take the court’s working strength to 33. There will be an additional vacancy on Wednesday, when Justice Navin Sinha retires.

Bottom 5 to top 4: Bihar leads in getting tap water to rural homes