Supreme Court: Act against hate speeches without waiting for complaint

The bench sought to know what action had been taken over hate speeches in Delhi, UP and Uttarakhand, including a recent one in which BJP leader Parvesh Verma called for “total boycott” without naming any community. 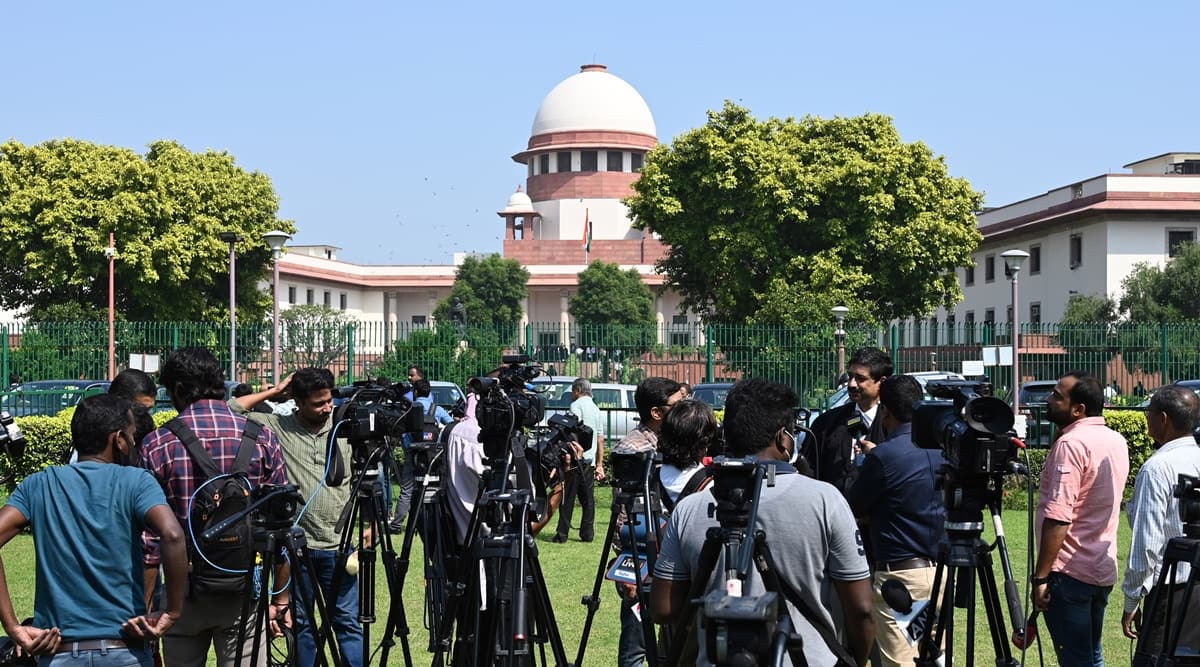 Very disturbing... what have we reduced religion to, says Bench(Express photo by Prem Nath )

Expressing its anguish over hate speeches, while calling these “very disturbing” and wondering “what have we reduced religion to”, the Supreme Court in interim directions Friday directed the police chiefs of Delhi, Uttar Pradesh and Uttarakhand to take “immediate” suo motu action against the offenders by lodging criminal cases without waiting for formal complaints.

It warned authorities that “any hesitation to act in accordance with this direction will be viewed as contempt of court and appropriate action shall be taken against the erring officers”.

The bench of Justices K M Joseph and Hrishikesh Roy issued directions on a petition by Shaheen Abdullah, a resident of Kozhikode in Kerala, who highlighted speeches delivered at a Virat Hindu Sabha organised by the VHP’s Delhi unit and other Hindu organisations in the Capital on October 10, and other similar petitions seeking action following hate speeches against Muslims at some Dharam Sansad events.

The bench sought to know what action had been taken over hate speeches in Delhi, UP and Uttarakhand, including a recent one in which BJP leader Parvesh Verma called for “total boycott” without naming any community.

Before the bench dictated its order, Justice Joseph said, “This is the 21st century. Where have we reached? What have we reduced religion to? Article 51A speaks of scientific temper. It is tragic.”

In its order, the bench said, respondents 2 to 4 (Delhi Police Commissioner and Director Generals of Police of Uttarakhand and Uttar Pradesh) “will file a report as to what action has been taken in regard to such acts as are the subject matter of this writ petition within their jurisdiction”.

The bench said they “shall ensure that immediately as and when any speech or any action takes place which attracts offences such as Sections 153A, 153B and 295A and 505 of the IPC etc, suo motu action will be taken to register cases even if no complaint is forthcoming and proceed against the offenders in accordance with law”.

Section 153A of IPC deals with promoting enmity between different groups on grounds of religion, race, place of birth, residence, language, etc., and doing acts prejudicial to maintenance of harmony; 153B speaks about imputations, assertions prejudicial to national-integration); 295A refers to deliberate and malicious acts intended to outrage reli­gious feelings of any class by insulting its religion or religious beliefs; Section 505 deals with statements conducing to public mischief.

Warning of contempt action over failure to act against those making hate speeches, the Supreme Court is reminding authorities that there are enough provisions in the Indian Penal Code to initiate suo motu action. It has specifically pointed to IPC sections 153A, 153B, 295A and 505 to deal with speeches promoting enmity on grounds of religion, public mischief and threatening national integration.

The bench said “such action will be taken irrespective of the religion that the maker of the speech or the person who commits such act belongs to, so that the secular character of Bharat as envisaged by the Preamble, is preserved and protected”.

It also asked the respondents to “issue direction(s) to their subordinates so that appropriate action in law will be taken at the earliest”.

Issuing notice, the bench said “the complaint which has been raised in the instant writ petition appears to be very serious. It relates to the growing climate of hate in the country”.

“This is attributable according to the petitioner to an unending flow of what is described as hate speeches being made by various persons against the Muslim community… The complaint of the petitioner is one of despondency and angst arising from the perception that despite suitable provisions in penal law being available, there is inaction or rather total inaction”.

It said “the Constitution of India envisages Bharat as a secular nation and fraternity assuring the dignity of the individual and unity and the integrity of the country is the guiding principle enshrined in the Preamble. There cannot be fraternity unless members of the community drawn from different religions or castes of the country are able to live in harmony”.

Stating that “we feel the court is charged with the duty to protect fundamental rights and also protect and preserve the constitutional values, in particular the rule of law and the secular democratic character of the nation,” it said, “the matter needs examination, and some form of interim directions”.

Appearing for the petitioners, Senior Advocate Kapil Sibal referred to the October 10 event.

The bench asked if any complaint had been filed. Sibal replied “We have filed many complaints. This Court or administration never takes action. Always status reports… We shouldn’t be coming to this court”. He said such events were being held on a daily basis now.

The bench sought to know whether he, as a Law Minister, had proposed anything to curb such acts. Sibal said he did, but there was no consensus.

Referring to the speeches at the event, he said Verma had spoken about “boycott” while another speaker had talked about slitting throats.

“What can we do? Silence is certainly not an answer. Not on our part, not on the court’s part,” Sibal said, urging the court to order a probe by a Special Investigation Team.

Justice Joseph asked if Muslims were also making hate speeches. Sibal replied that no one who makes hate speeches should be spared. The bench went on to state that those on both sides are making such speeches.

Justice Roy, referring to the statements mentioned in the petition, said they are “very disturbing” and “condemnable”, given that the country is religion-neutral. He too sought to know why only statements against one community are highlighted, and said the court cannot be seen as being biased.