This is not the first time that Thakur has made a controversial remark. Last month she said she had not been elected as an MP to clean toilets and drains, drawing criticism from the Congress, which called the statement an insult to her mandate. 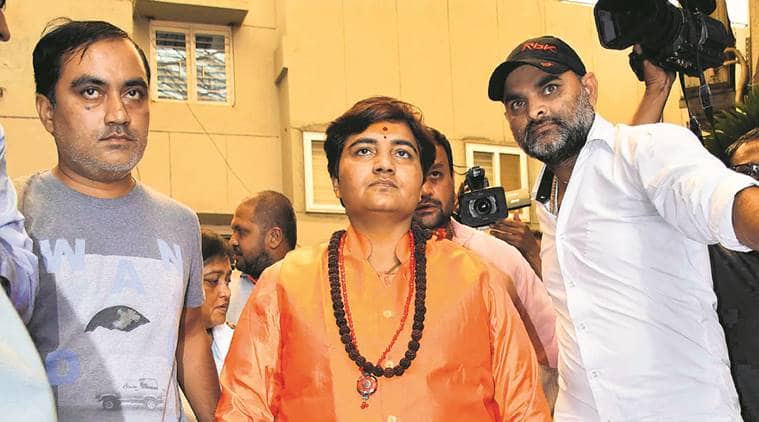 BJP MP from Bhopal Sadhvi Pragya Thakur. Thakur made the remark while made while addressing a condolence meeting to pay tributes to Arun Jaitley.  (Express photo)

“One seer told me don’t lessen your penance as these are very bad times and the Opposition is using ‘marak shakti‘ which is intended to harm the loyal and hardworking members of BJP. You are a target and please take care. I do not remember his words now as I did not pay attention but as our top leaders such as Sushma (Swaraj) ji, Babulal (Gaur) ji, and recently (Arun) Jaitley ji passed away, it occurred to me what if it was true,” ANI quoted Thakur as saying.

#WATCH Pragya Thakur,BJP MP: Once a Maharaj ji told me that bad times are upon us&opposition is upto something, using some 'marak shakti' against BJP.I later forgot what he said,but now when I see our top leaders leaving us one by one,I am forced to think,wasn't Maharaj ji right? pic.twitter.com/ZeYHkacFJj

“Marak shakti” stands for a force, initiated through occult or rituals, intended to harm an individual or group. Former Union finance minister Arun Jaitley died on August 24 and Sushma Swaraj on August 6.

“But now, when I see our top leaders Sushma ji, Babulal ji, Jaitley ji leaving us one by one after undergoing pain, I am forced to think, wasn’t it (what Maharaj said) right? It is true that our leadership is leaving us untimely,” the BJP MP  said.

Reacting to her comments, the Congress has slammed the Bhopal MP for her comments and advised the BJP to sack her for making fun of the death of Arun Jaitley, Sushma Swaraj, Manohar Parrkkar and Babulal Gaur.
“Sometimes she makes fun of the martyrdom of former Maharashtra ATS chief Hemant Karkare by claiming that her curse killed him, another time she glorifies Mahatma Gandhi’s assassin Nathuram Godse as a patriot,” said Chief Minister Kamal Nath’s media coordinator Narendra Saluja. He added that the BJP should immediately expel her for making such nonsensical comments in a meeting called to condole the death of Jaitley and Gaur and apologise to the family members of the late leaders.
Chief of Congress’s media cell Shobha Oza said the comments were objectionable. She said the BJP parliamentarian has lost her mental balance and needs immediate treatment.

Pragya Thakur, an accused in the Malegaon blast case, is no stranger to making controversial remarks. Last month the BJP leader said she was not elected as an MP to clean toilets and drains, drawing criticism from the Congress, which called the statement an insult to her mandate.

She was issued a showcause notice by the BJP ahead of the elections for calling Mahatma Gandhi’s assassin Nathuram Godse a patriot. Pragya had also claimed that the then Maharashtra ATS chief Hemant Karkare was killed in the 26/11 Mumbai terror attacks due to her “curse”.

Saaho song Baby Won’t You Tell Me: A cut-and-dry number by Shankar-Ehsaan-Loy