Sabarimala HIGHLIGHTS: Bindu and Kanakadurga are residents of north Kerala, who had tried to climb up to Sabarimala temple on December 23 last year, but could not make it due to massive protests.

After the Hindu outfits called for a state-wide hartal in protest of entry of two women into the Sabarimala hill shrine in Kerala, the traders and tourism firms here Wednesday vowed to boycott the bandh citing their financial losses. In December last year too, when the BJP called for a dawn-to-dusk hartal in Kerala protesting the suicide of a man over the Sabarimala agitation, traders’ organisations and firms operating in the tourism sector had cried foul.

More than three months after the Supreme Court allowed women of menstruating age to enter Kerala’s Sabarimala temple, two women in their 40s entered the shrine Wednesday. The women, identified as Bindu and Kanakadurga, reached inside the sanctum sanctorum early morning with help of the police who were in mufti.

A recording of their entry into the shrine has been doing rounds on WhatsApp. According to the video footage, the women have not climbed the sacred 18 steps used by pilgrims who take the 41-day vow and carry the sacred offering of ‘irumudikettu‘. They have used a side entrance, used by VIPs and the media, which gets them directly in front of the sopanam and into the sanctum of the temple. Protests erupted at different places in Kerala, mainly under the aegis of the RSS-backed Sabarimala Karma Samithi, against what they term the ‘violation of temple customs and traditions.’ The BJP organised protest marches to the secretariat in Thiruvananthapuram and road blockades in Kollam and Ernakulam. The Congress has also vowed to organise agitations throughout the state.

A Kerala government-run hotel was attacked on Wednesday night by unidentified persons in suspected backlash over two women of menstruating age entering the Sabarimala temple in the neighbouring state. According to initial inputs, the outer glass panes in the hotel, including those at a security kiosk, were damaged in the attack, a police official told PTI.

"As soon as we got a call, the local strength (of personnel under Thousand Lights jurisdiction) was rushed there," the official said. Though the attack was suspected to be a fallout of two women entering the Sabarimala temple in neighbouring Kerala, the official said since the probe was at a "very preliminary stage" nothing could be confirmed as of now. Further details are awaited.

Security beefed up in Chennai after attack on Kerala guest house

Nearly three months after the Supreme Court verdict opened the gates of women of all ages at Sabarimala, two women, escorted by police officials in plain clothes, offered prayers at the temple. Hours later, the chief priest or the ‘thantri’ abruptly closed the temple doors for about an hour to conduct the purification rituals.

Pandalam police confirmed that Chandran Unnithan, a 55-year-old BJP worker who was wounded in the stone pelting, died around 10.30 pm today. He was seriously injured during a clash between CPM and BJP workers in front of the CPM party office.

We did not face any issues: Bindu, who entered Sabarimala shrine

One of the women devotees, Bindu, who entered the Sabarimala temple  said she, along with Kanaka Durga, has returned safely after offering prayers at the shrine without any hazards, reported ANI.

One of the women devotees, Bindu who entered & offered prayers at Kerala's #SabarimalaTemple at 3.45am today: This morning at around 01:30 a.m, Kanaka Durga & I started from Pamba, reached Sannidhanam by around 3:30 a.m. and returned after darshan. We did not face any issues. Social activist Trupti Desai Wednesday hailed the entry of two women below 50 years of age into the hill shrine in Kerala's Sabarimala, saying it is a "victory of equality".

"This is a big victory for our agitation. It is a victory of equality. This is a good beginning for women in the new year", Desai told PTI from Pune. "Those against women's entry had openly thrown a challenge that no women in the 10-50 age group will be able to reach the 'sannidhanam'. Their agitation has now failed."

She said that the temple authorities should allow women of all age groups to offer prayers at the Ayyappa shrine. Young women who have done online booking should also be allowed to go to the shrine and pray there, she said.

"Today is a historic day for us. During the mandala puja season, many women were stopped. There was a tense atmosphere in Sabarimala", she said. Trupti Desai said she would not be able to visit the shrine before January 20 when it closes as there was a heavy rush of pilgrims and due to her prior programmes, but added that she would go there the next time it reopens.

Desai was forced to return from the Kochi airport when she arrived to offer prayers at Sabarimala with six young women, following "nama japam" (chanting of Ayyappa hymns) protests by devotees and right wing outfits for 13 hours on November 16.
She has, so far, spearheaded the campaign for women to be allowed into various religious places such as the Shani Shingnapur temple, the Haji Ali Dargah, the Mahalakshmi Temple and the Trimbakeshwar Shiva Temple.

Every women has the right to worship: Brinda Karat

Protest march in Kochi against women entry into Sabarimala 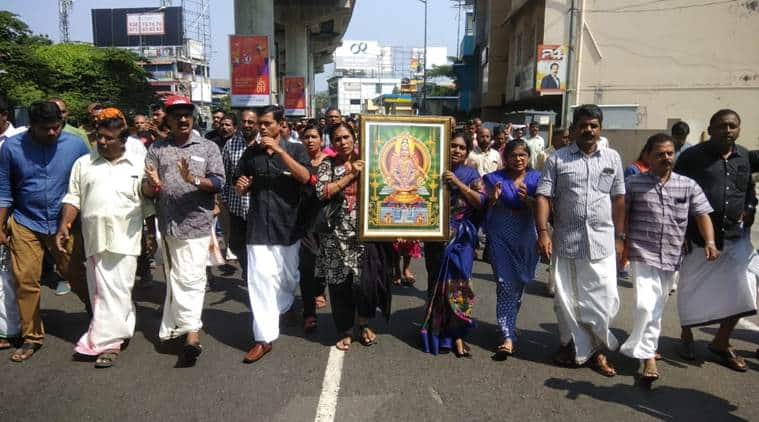 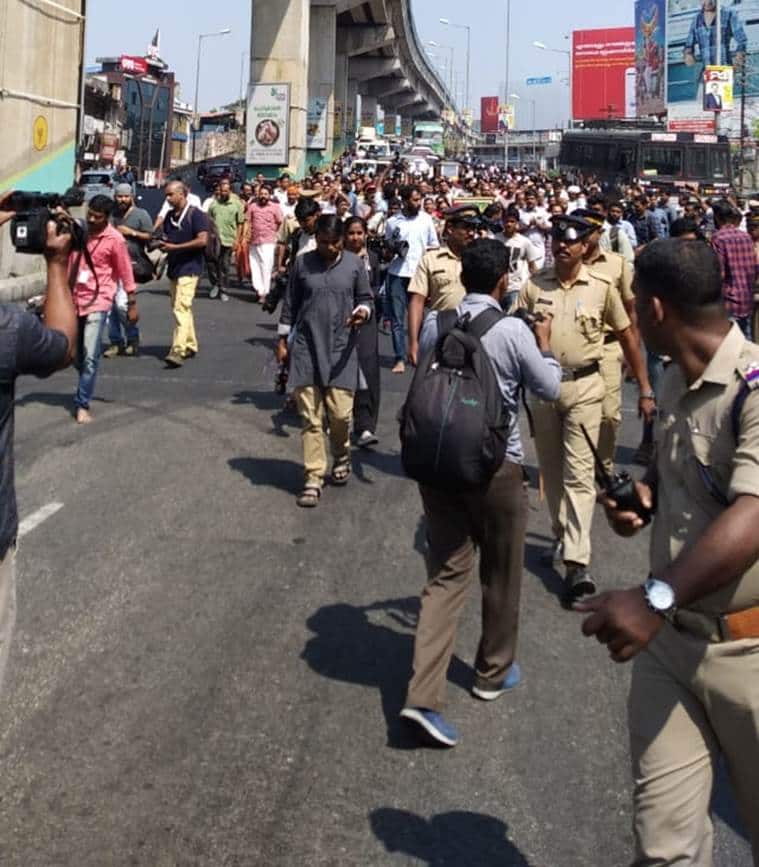 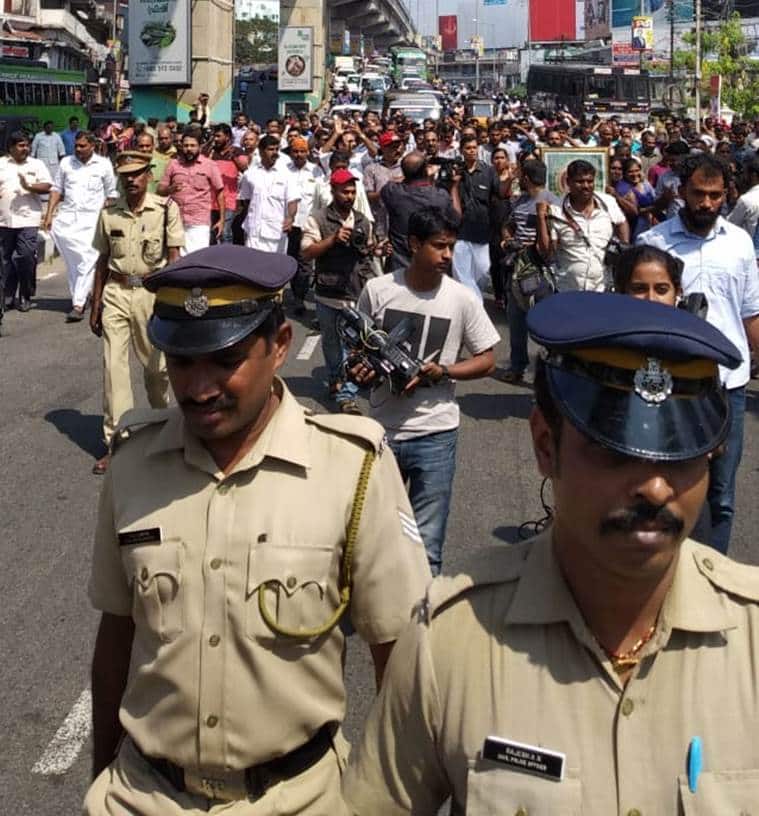 According to reports, both women had stayed at a secret location, vowing not to return home until they offered prayers at the temple.

Hindu organisations, that have been protesting against the entry of the two women inside the Sabarimala temple on Wednesday, called for a statewide hartal tomorrow.

Pinarayi Vijayan a 'modern day Aurangzeb': BJP state president Pillai
BJP state president PS Sreedharan Pillai called Vijayan a 'modern day Aurangzeb' who was out to destroy Hindu temples. "The ruling administration in Kerala consists of cheats. The way the women were taken to the temple smacked of an planned, organised conspiracy. The stand of the BJP has been vindicated. The ruling CPM was out to destroy the traditions of Sabarimala. Ayyappa devotees and the larger public will react strongly to this," Pillai told reporters.
Entry of women was in line with the SC verdict: minister in-charge of temple administration

Kadakampally Surendran, the minister in-charge of temple administration, said he was unaware of the women entering the temple until one of his aides showed him the videos circulating on WhatsApp. He added that the entry of the women was in line with the Supreme Court verdict.

BJP workers waved black flags at Devaswom minister Kadakampally Surendran in Guruvayur where he had gone to attend a function, PTI reported. Health minister K K Shylaja also had to face the ire of activists of the Yuva Morcha, the party's youth wing at Kannur, who showed black flags, they said. The protesters also took out a protest march in the state capital. In Kasaragod, they blocked traffic on the national highway.

Protest march in Kochi against women entry to Sabarimala

People are protesting against women entry to Sabarimala in Kochi.

The Sabarimala sanctum has reopened for pilgrims after purification rituals.

Women who were stopped from entering Sabarimala temple

Despite support from the Kerala administration, several women have failed to reach the hill shrine, deterred by protests fueled by the BJP and several Hindu fringe groups against the apex court verdict. Read More

It's our responsibility to give protection to those who come to temple: Kerala DGP

Kerala DGP Lokanath Behera on 2 women in their 40s offering prayers at #SabarimalaTemple: It is the responsibility of police to give protection to those who come and we did it. Verifying the age and other details is not our responsibility. (file pic) pic.twitter.com/stGE9ofFBb

It's confirmed that the sanctum sanctorum is closed for purification rituals

It is confirmed now that the sanctum sanctorum is closed for purification rituals. It's common in situations when blood is split or a baby urinates or stray animals enter the inner sanctum or women of menstrual age enter.

The sanctum sanctorum of the Sabarimala temple has since been closed. There are unconfirmed reports that purification rituals are being performed.

Meanwhile, hectic talks are in progress at Sabarimala between the priest family and officials of the Travancore Devaswom Board. They are checking CCTV footage to verify the claim of the two women. They were accorded special treatment and given entry through a VIP gate is likely to fuel protests. The men accompanying them also shot the videos on cellphone in a place where filming is strictly prohibited.

Kerala Chief Minister Pinarayi Vijayan confirmed that the women went inside the sanctum sanctorum. "There were hurdles for women to climb and enter Sabarimala temple. If they have entered the temple today, there must not have been any hurdles. It is true that they have entered. Police had been given instructions to provide protection to any woman who wants to climb, Vijayan said.

The two women, in their 40s, are believed to have got darshan at 3: 45 am with the help of police in mufti and they had returned to Pamba after entering the temple as soon as possible. Tight security arrangement has been made at Kanakadurga’s house, fearing protests. Her family has also been shifted to a safe location.

Women used a side entrance, used by VIPs and media to enter Sabarimala temple

According to the visuals, the women have not climbed the sacred 18 steps, used by pilgrims who take the 41-day vow and carry the sacred offering of 'irumudikettu'. They have used a side entrance, used by VIPs and the media, which gets them directly in front of the sopanam and into the sanctum of the temple.Police officials at the base camp of Pampa said they had no clue where the two women are at the moment.

The women started their climb around midnight

The women, Bindu and Kanakadurga, started their climb around midnight and reached inside the sanctum sanctorum early morning at 3:45 am. These are the same women who had attempted to climb on December 23rd.

Welcome to our Live blog. Two women reportedly in their 40s allegedly entered the shrine Wednesday. A recording of their entry shows they have used a side entrance, used by VIPs and the media, which gets them directly in front of the sopanam and into the sanctum of the temple. Follow Live updates

Women in the age group of 10-50 years are traditionally barred from entering the Sabarimala temple. But the Supreme Court, through its September 28 landmark verdict, lifted the curb and permitted women of all age groups to offer prayers at the temple. Massive protests rocked Kerala after the Supreme Court verdict. Over a dozen women were stopped by the protesters when they made their way to the shrine. Since the temple first opened after the SC’s judgment, violent protests, a state-wide strike and prohibitory orders have dominated Kerala.