Sabarimala row LIVE updates: The meeting between the TDB and the royal family has been concluded and rescheduled on October 19.

Sabarimala row LIVE updates:  The temple will open for a monthly ritual  on Thursday.

The Travancore Devaswom Board, which manages the temple, and the royal family of Pandalam have failed to reach an agreement over filing a review petition against the Supreme Court’s verdict allowing women to enter the Sabarimala temple. President of the managing committee of the Pandalam palace Sasikumar Varma said that the royal family urged the temple board to file a review petition, failing which they walked out of the meeting as their demands were not met.

“We’re upset that they’re unwilling to discuss it today. Meeting wasn’t satisfactory,” said Varma.  The said meeting has been scheduled on Friday, and the next course of legal action would be discussed, including the review petition.

The royal family of Pandalam along with the family of the thantri (priest) Monday expressed willingness to attend the meeting. Earlier the Board had accepted the apex court’s order, however, amid the outcry, it has diluted its stand.

Board president and CPM leader A Padmakumar had said the board is torn between the to court’s order and the agitation raised against it protecting temple traditions.

Sabarimala row LIVE: Earlier the Board had accepted the apex court's order, however, amid the outcry, it has diluted its stand.

Tension mounts as devotees stop women from travelling to Sabarimala

Devotees on Tuesday stopped vehicles at Nilackal - the main gateway to Sabarimala- and prevented women of the "banned" age group from trekking to the holy hill, as tension loomed ahead of the opening of the Lord Ayyappa Temple tomorrow for monthly pooja. The shrine located on the mountain ranges of the ecologically fragile Western Ghats opens tomorrow for the first time after the recent Supreme Court order permitting women of all age groups there, reports PTI. Chief Minister Pinarayi Vijayan, however, told reporters that no one would be allowed to block devotees from proceeding to Sabarimala.

There is a Christian connection, too, to the temple. A large number of devotees visit the Arthunkal church dedicated to St Andrew and St Sebastian at Alappuzha on their way back from Sabarimala. At the church, many of them remove the sacred beads they wear around their neck through their 41-day fast. Ponds at the church are cleaned weeks before the annual pilgrimage begins. 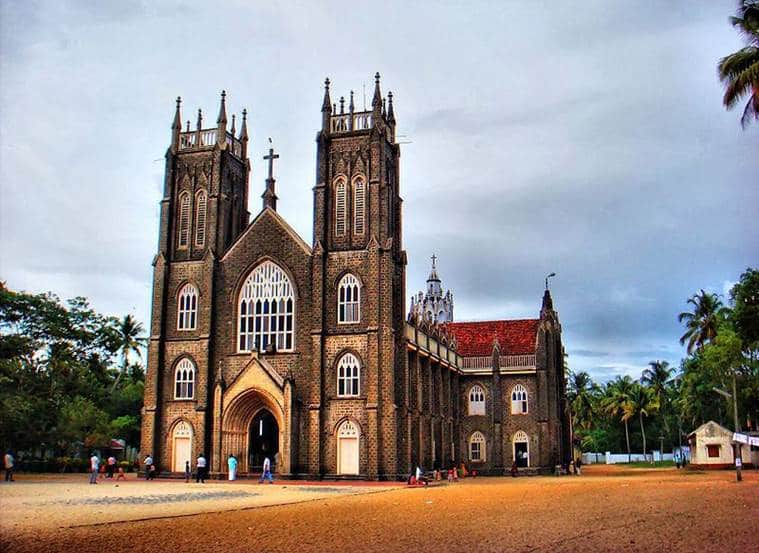 Lok Sabha MP Anto Antony, who represents Pathanamthitta constituency, under which the Sabarimala hill shrine falls, urged the Centre on Tuesday to issue an ordinance to find a way around the Supreme Court's order lifting the ban on women restricted to enter the temple. While in Erumeli, Antony attended a dharna organised by women's outfits of Congress, Indian Union Muslim League and Kerala Congress (M) in protest against the Supreme Court verdict.

He told PTI, "The Sabarimala temple will open for monthly pooja tomorrow evening. We all are very concerned. This time, the centuries' old pilgrimage to Sabarimala, which is a festival of all faiths, is in the shadow of conflicts. Unfortunately, I haven't got any response from the Prime Minister so far." He also said the apex court's ruling has met with opposition from everyone including people of different faith.

Travancore Devaswom Board and the Pandalam royal family have failed to reach a consensus. President of the managing committee of the Pandalam Palace Sasikumar Varma, said that the board could not commit to the demands of the royal family to file a review petition against the top court's order, reported Indian Express.

"We're upset that they're unwilling to discuss it today. Meeting wasn't satisfactory.We came out of meeting because they're not ready to accept our demands," said Varma, as quoted by ANI.

TDB President A Padmakumar said that the Board would meet again on Friday to decide the next course of legal action, including the review petition against the apex court's verdict on allowing women to enter the Sabarimala temple.

The dance has begun. But it's a male-only affair here in Erumeli even as sporadic, unconfirmed reports of violence stream in from Nilackal, the base camp @IndianExpress #Sabarimala pic.twitter.com/dnxCcRiNqA

Seen rain like this? It's pouring down like anything here in Erumeli, one of the important halting points for Sabarimala pilgrims. In locals' hearts here, such downpour evokes grim memories of the floods 2 months ago @IndianExpress pic.twitter.com/B0k0SZmnpP

On their way to Sabarimala, a group of Ayyappa devotees halt at Erumeli for lunch

A group of pilgrims from Andhra getting ready to perform a ritual dance in Erumeli before trekking to Sabarimala @IndianExpress pic.twitter.com/bXmFoyKJ8l

Hindu activist and a member of thantri family Rahul Easwar who has been at the forefront of the campaign against the Supreme Court verdict had written on Twitter a few days back.

With due Respect -
Trupti Desai & others will be stopped at #Sabarimala

We will resist any invasion & #SaveSabarimala from being intruded by atheist & ultra feminists forces by Gandhian Prayer Resistance.

We will guard Sabarimala for 125 Hours.

Trivandrum: Travancore Devaswom Board meets ahead of opening of #SabarimalaTemple tomorrow #Kerala pic.twitter.com/bcaU1Wxnn3

People rally on bikes from Pandalam ayyappa temple to Nilakkal 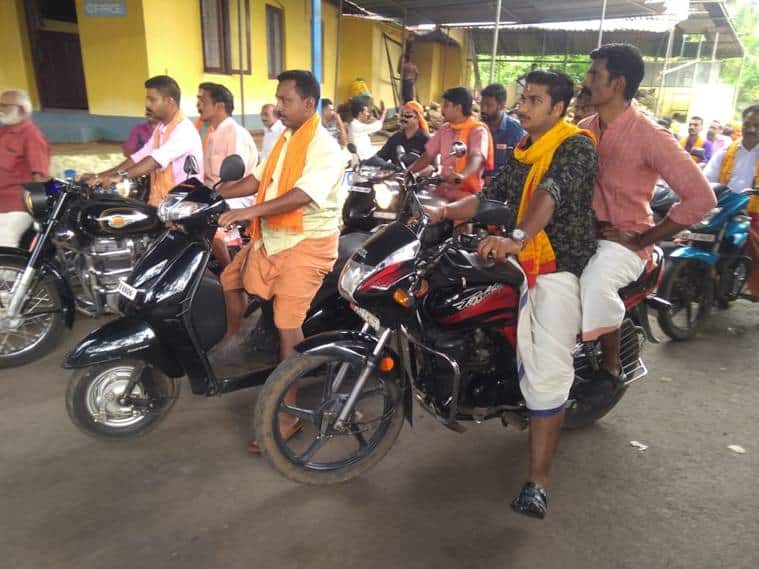 As protest over entry of women of all ages to Sabarimala continues, Kerala CM Vijayan says Govt would ensure support and safety for pilgrims going to the hill shrine. Temple opens for monthly ritual tommorrow, the first after SC verdict

Here's the popular Vavar mosque in Erumeli, an important halting point for pilgrims going towards Sabarimala, Vavar is believed to be a Muslim warrior and a close associate of Lord Ayyappa. Different stories exist about the close friendship between Lord Ayyappa and Vavar. There is also a shrine dedicated to Vavar close to the main temple complex at Sabarimala. Another protest meeting is being conducted by Kerala Vellala Mahasabha community in Erumely, which include Kerala BJP leaders as well, Indian Express reported.

Another protest meeting against the SC verdict on Sabarimala under the leadership of the Kerala Vellala Mahasabha community in Erumely, @BJP4Keralam leaders taking part @IndianExpress pic.twitter.com/VzAJ6GWtZn

Women, journalism students pulled out of buses near Sabarimala

Women have been pulled of state-run KSRTC buses by a group of people at Nilakal, near Sabarimala, reported Indian Express Malayalam. TV visuals show three of these women were wearing black dresses, usually worn by Ayyappa devotees. It has been further reported that some of the women pulled out of the bus are students of journalism who expressed their intention to travel till Pampa, the base camp of the hill shrine.

Govt will ensure facilities to devotees to go to Sabarimala temple and offer prayers: Kerala CM

In the midst of protests, Chief Minister  Pinarayi Vijayan reiterated that government will not submit a review petition against the Supreme Court's verdict. Speaking in favour of the top court's order, he said, the state government would not allow any person to take law and order in their hands. "The government will ensure facilities to devotees to go to Sabarimala temple and offer prayers," said CM Vijayan. 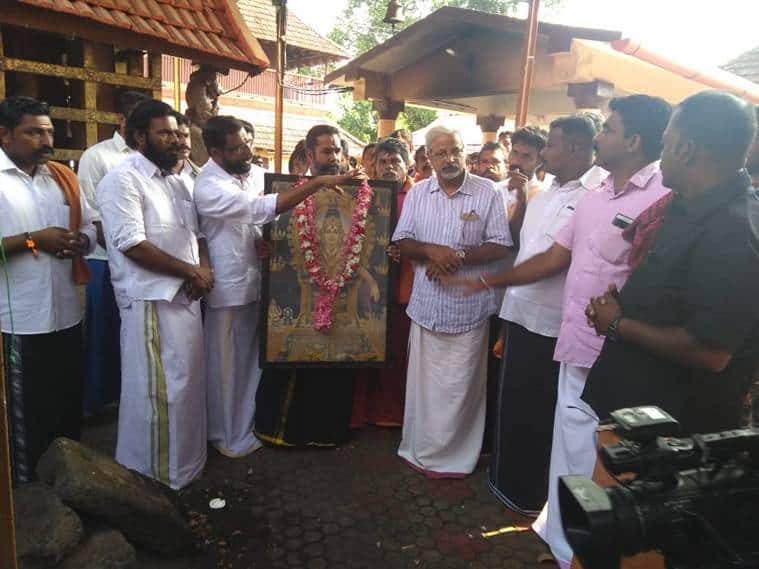 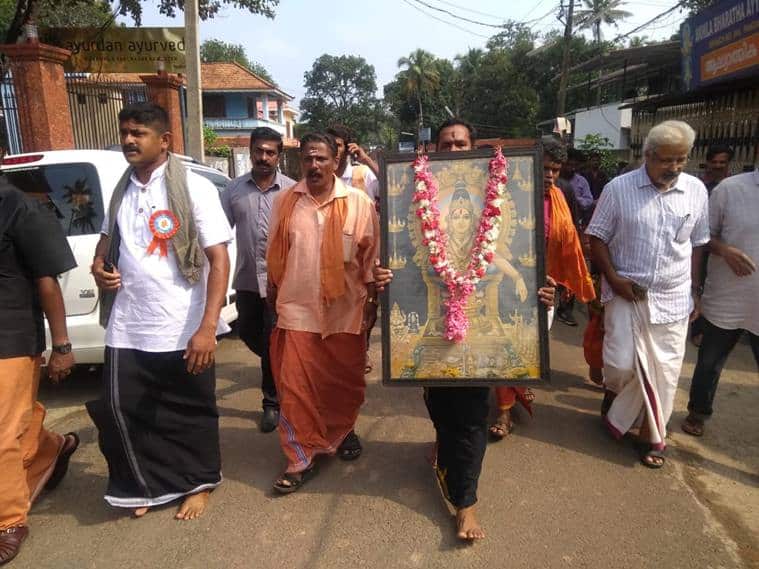 The Mahila Congress has organised a corner meeting in Erumeli against the top court's order, one of the crucial halting points in the pilgrimage, Indian Express reported.

When we (UDF) were in power, we submitted affidavit in favour of sentiments of believers and devotees: Mahila Congress state president Lathika Suresh @IndianExpress pic.twitter.com/PpRUvyuwt1

All you need to know

In a 4-1 verdict, Supreme Court on Septemeber 28 put an end to a centuries-old custom, restricting women into the Sabarimala temple. However, a bench of five judges, led by the then Chief Justice of India Dipak Misra, Justice Indu Malhotra gave a dissenting order stating “the religious practice of restricting the entry of women between the ages of 10 to 50 years is in pursuance of an ‘essential religious practice’” and “notions of rationality cannot be invoked in matters of religion by courts”. Read more| SC removes gender barrier, throws open Sabarimala to women of all ages

Justice Chandrachud said “the postulate of equality is that human beings are created equal… To exclude women from worship by allowing the right to worship to men is to place women in a position of subordination. The Constitution should not become an instrument for the perpetuation of patriarchy.

Earlier this month, some organisations had filed review petitions seeking review of the apex court's order, which the court had declined to hear.  Meanwhile, Chief Minister of Kerala Pinarayi Vijayan maintained his stand that his government would abide by the top court's order and cannot backtrack from its affidavit.

“The government does not want to clash with the faithful. At the same time, the government will not succumb to the attempts of the politically motivated forces who want to foment tension in society. The government will go ahead in upholding the reformative tradition of the state,’’ he said.

Who filed the case?

A group of five women lawyers had moved the apex court after the Kerala High court upheld the centuries-old restriction, and ruled that only the “tantri (priest)” was empowered to decide on traditions. The top court heard the matter for eight days, reserving the judgment in July.

While the TDB is torn between the top court's order and agitation by Hindu activists, Kerala unit of the Shiv Sena warned Saturday to commit mass suicide if women dared to enter the temple. A member of the Sena informed, as quoted by a news agency, that women activists would gather near the Pamba river on October 17 and 18 as part of a suicide group and if any woman attempts to enter the temple, activists would commit suicide.

Hindu organisations aim to block women from the three places leading to Sabarimala,Pampa, Nilakkal and Erumeli.

Kerala has been on the boil ever since the Supreme Court lifted the ban on women's entry in the Sabarimala temple and various Hindu organisations are preparing to stop women from entering the temple when it opens on Wednesday.

Hindu activist and a member of thantri family Rahul Easwar who has been at the forefront of the campaign against the Supreme Court verdict, said the agitation would be peaceful. "We will not physically restrain any woman. The women would have to walk over our bodies to reach the temple," he said.