The Sabarimala temple has opened twice after the SC verdict, but no woman has been successfully able to enter the shrine so far.

As Sabarimala Temple opened Friday evening for a two-month long pilgrimage season amid tight security, activist Trupti Desai said that she has been asked by the state police to return to Pune, PTI reported. The activist reached Mumbai on Saturday early morning while protesters gathered outside the airport.

Protests have been on at Cochin airport since today morning following Desai’s arrival in the state in an attempt to trek the hills and pray at the shrine on Saturday. Speaking to IndianExpress.com on Thursday, Desai had said the Kerala CM and DGP would be responsible if she and women accompanying her were attacked. Kerala activist Rahul Easwar also joined the protests at the airport briefly and said that Desai would have to walk over the protesters to enter the temple.

Meanwhile, the Travancore Devaswom Board has decided to move Supreme Court seeking more time to implement its verdict. Police personnel have been deployed at the base camp in order to avoid violence as devotees throng Pamba.

"We've come here to protest. Trupti Desai should try going there after attaining 50 yrs of age and not before that. She won't be allowed to step inside the temple before that. There are so many devotees working towards this & stopping other women too," say protesters outside Mumbai airport.

Maharashtra: Protesters gather outside Mumbai airport where Trupti Desai, the founder of Bhumata Brigade, has arrived. She was at the Cochin International airport, Kerala for the entire day yesterday as protesters did not allow her to proceed to #SabarimalaTemple. pic.twitter.com/JNMQUtzJMk

Sabarimala protests: Who is the activist who arrived in Kerala this morning to attempt trekking temple?

Born in Nipani Taluka on the Maharashtra-Karnataka border, Desai’s family moved to Pune when she was eight. The eldest among the three siblings, Desai did her primary schooling in her mother’s village in Kolhapur. She was a home science student at Shrimathi Nathibai Damodar Thackersee College but discontinued in the first year due to family problems. Read full article

Kerala Chief Minister Pinarayi Vijayan has sought cooperation from everyone to ensure that the two-month-long pilgrimage season at the Lord Ayyappa temple in Sabarimala, which began Friday, passes off peacefully. The government's aim is to uphold the esteem of the Sabarimala temple, he said. 'Any untoward incident would only mar the shrine's reputation and the media must exercise caution and not publish 'misinformation that cause disturbances,' Vijayan said in a Facebook post.

Ayyappa Karma Samithi workers conduct a namajapa yatra to Trupti Desai's home in Pune as a protest against her attempt to go to Sabarimala on Thursday. 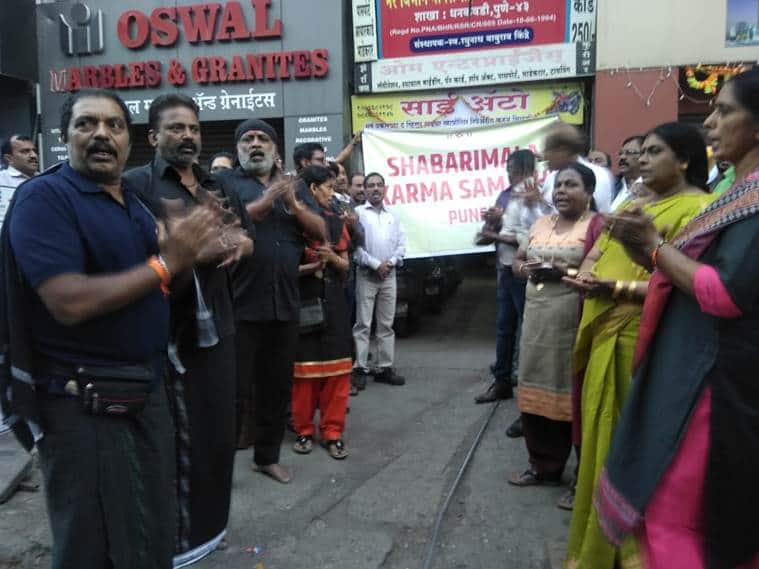 Trupti Desai vows to come back to Sabarimala

"People who indulge in hooliganism are not Ayyappa devotees. This protest is a sign that protesters are scared of me and this also proves my victory. This is a fight for gender equality and I extend my gratitude to all media organizations for supporting me. I'm not going because I'm scared but it is on the request of Kerala police citing security threats. I also thank Kerala police and I'll return to Sabarimala but without prior announcement," said Trupti Desai.

It saddens me to see that Ayyappa devotees are abusing and threatening us: Trupti Desai

In an address to the media at Kochi airport, after being asked to return to Pune by the state police, Trupti Desai said, "Protestors threatened taxi drivers from providing us services. Hotel staff was threatened of damage to hotels if rooms were given to us. It saddens me to see that people who call themselves Ayyappa devotees are abusing & threatening us."

#Kerala: Visuals of Trupti Desai from Kochi airport; she will return to her hometown Pune tonight after protesters did not allow her to proceed to #SabarimalaTemple. pic.twitter.com/EUHG3CIH9U

Kerala police have asked me to return to Pune, says activist Trupti Desai

Amid over a 12-hour stand-off with devotees and others, including BJP workers, at the airport here vowing not to let her proceed to the Sabarimala
shrine, activist Trupti Desai said police have asked her to return to Pune. The development comes even as the doors to the Lord Ayyappa temple opened for the "Mandala Makkaravillakku" puja. Desai said police officers held a meeting with her. "Police have requested me to return to Pune," she
told reporters. Desai said she will announce her decision by 6.30 pm.

Asked by police to return to Pune, says Trupti Desai

Activist Trupti Desai, who is in Kochi en route to Sabarimala, says she has been asked by police to return to Pune. The activists have been held at the airport ever since she landed in Kochi to reach Sabarimala as the shrine opened. She faced a major protest at the airport by activists including Rahul Eshwar.

The Travancore Devaswom Board, which manages the Sabarimala shrine, Friday decided to approach the Supreme Court seeking more time to implement its order allowing women in the menstrual age to offer prayers at the Lord Ayyappa temple. The decision was taken after discussion with legal experts and board members, TDB President A Padmakumar told reporters here, a day ahead of the commencement of the two-month long annual pilgrim season.

Will bring more supporters from other districts if needed: Kerala BJP secretary

Kerala BJP secretary K Surendran told indianexpress.com that the protest will continue till she (Trupti Desai) go back. They will also try to bring more supporters from other districts if needed.

In Pics: Rahul Easwar among protesters that are gathered outside Cochin airport blocking exit for Trupti Desai
LOAD MORE

Devotees at the Sabarimala shrine. (File/Express photo by Vishnu Varma)

Women of menstrual age were barred from entering the Sabarimala shrine as the presiding deity Lord Ayyappa is considered a celibate. The Supreme Court had, on September 28, overturned the ban in a 4-1 verdict, triggering protests by Hindu groups who refused to abide by the ruling.

While the state government has said it would not dilute the SC ruling and enforce its implementation, right-wing hindu outfits, Congress, and the BJP have opposed the verdict.

The Sabarimala temple has opened twice since the September verdict, but no woman has been successful in entering the shrine, amid protests by Ayyappa devotees who demand that restrictions on entry of women of menstrual age (10-50) in the temple be maintained.

Kerala now braces for fresh protests after an all-party meeting called ahead of the temple's opening for the two-month pilgrim season ended in a stalemate Thursday.

At the meeting, Chief Minister Pinarayi Vijayan rejected the Opposition suggestion that the government seek time from the Supreme Court to implement its order since a clutch of review petitions are to come up for hearing before the top court on January 22.