Pilgrims on their way to Sabarimala temple with the ‘irumudikettu’ on their head. (Express photo by Vishnu Varma)

Thousands of pilgrims offered prayers at Lord Ayyappa temple in Sabarimala early Saturday, the first day of Malayalam month of ‘Vrischikom,’ even as a 12-hour shutdown was initiated against the preventive detention of a Hindu Aikya Vedi leader. Pilgrims, including children, queued up in large numbers since the temple opened at 3 am, PTI reported.

Hindu Aikyavedi state President K P Sasikala was later released on a bail after the court the same day after she was issued a showcause notice, while the dawn to dusk shutdown continued in the state. A young couple traveling in a car were attacked by protesters for defying the hartal and were immediately rushed to a hospital, said The News Minute report.

The Travancore Decvaswom Board which manages the shrine announced its decision to move Supreme Court seeking more time to implement its verdict. Police personnel were on their toes until late evening today as they also detained BJP Secretary K Surendran citing law and order concern.

Normal life was affected in the state as the shutdown progressed public transport services were disrupted, however buses in Sabarimala continued plying. 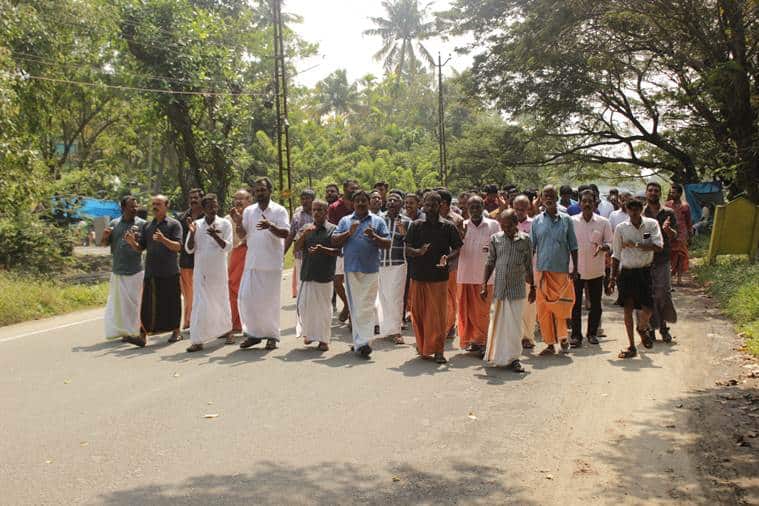 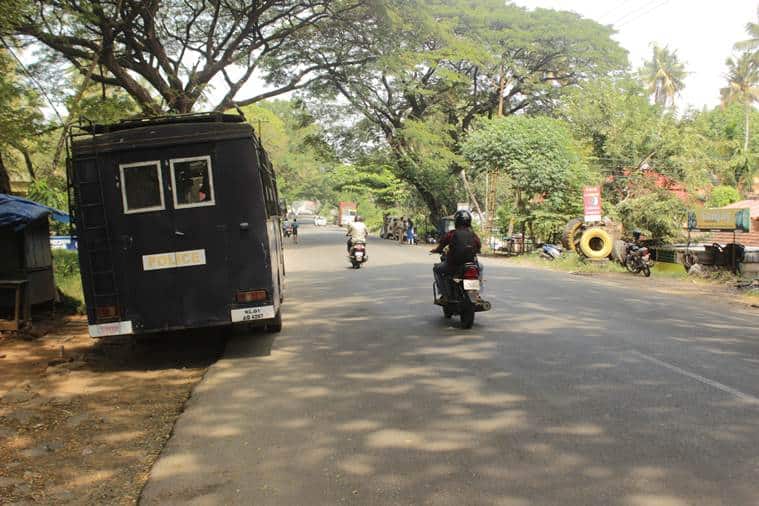 Surendran, who was carrying the 'Irrumudikettu' (bundle containing offerings for the Lord), was told by a police team led by Yatish Chandra, Superintendent of Police, not to proceed to the shrine as it would create law and order problems. Surendran told the police he had come as a 'Ayyappa Bhaktha' (devotee) and should be allowed to pray at the temple. Chanting 'Swamiyae Ayyappa', Surendran and others with him jostled with police and tried to move forward saying there was no question of going back. Three of his supporters were also with Surendran when he tried to leave for the shrine.

BJP secretary taken into preventive custody at Nilakkal base camp

BJP general secretary K Surendran and Thrissur district president A Nagesh detained by police from Nilakkal base camp when they attempted to go to Sabarimala.  Police state deterioration of law and order in the area if they are allowed to pass.

All quiet on tougher alternate route to Sabarimala, but Sathram is not taking any chances

The 12.5 km route, that begins at Sathram – a tiny village surrounded by tea estates – involves an initial steep, uphill trek of 2-km and then meanders through the deep jungles of the Periyar Tiger Reserve, home to wild elephants, gaurs and of course, tigers. Despite its adverse geographical contours, this route offers pilgrims the advantage of reaching the ‘sannidhanam’ (main temple) at Sabarimala directly, bypassing the long queues at Pamba and Nilakkal, the main base camps of the shrine. Read full article

Hindu Aikyavedi state President K P Sasikala who was taken under preventive custody on Friday evening has been granted bail. The court has issued a showcause notice, as the activist continues to move forward on her pilgrimage to the temple. While she has been provided with security and is now heading to base camp Pamba, Sasikala has been asked to return as soon as her darshan is over.

In Kuttiyadi, Kozhikode, a young couple travelling in a car were allegedly stopped and attacked by protestors, who were enforcing a hartal on Saturday. Julius Nikithas, son of former MLA KK Lathika and CPI (M) district secretary P Mohanan, and his wife Saniyo Manomi, a reporter with Asianet, were injured in the attack, Kuttiyadi police SI said. “He was taken to the Kuttiyadi hospital. The wife too was beaten. They are being taken to the Kozhikode Medical College,” the SI told The News Minute.  According to regional news channel Asianet, the couple was travelling from Saniyo’s house in Paleri to Julius’s house in Ambalakkulangara. A gang of ten stopped the car at Ambalakkulangara and allegedly attacked them, taking the car keys and dragging the couple out. Julius was wounded in the attack, and sustained a nose bleed. Saniyo was also allegedly beaten on her chest and below her stomach.

Day 2 of Sabarimala pilgrimage season-BJP hartal. Will a party with iota of consideration for the plight of devotees call for a hartal? BJP has become hartal party of Kerala with record of 38 hartals -regional and state wide- last year.

Kerala Finance Minister tweeted about Sasikala's arrest, said if one breaks the law, they will be booked

We will be restrained but firm. To prevent untoward incidents like RSS volunteers taking control of Sannidhanam no one is permitted to stay back or go there after 11 o clock. Ms Sasikala has no exemption. Sorry, you break law you will be booked, hartal or no hartal.

BJP Keralam said in a tweet that the LDF government had failed completely to arrange basic necessities to protect Sabarimala pilgrims right to worship.

Police stopped me at Nilakkal. Didn't give permission to go beyond as Section 144 is imposed & possibility of arrest.

Cooperated with Police.. wud request all devotees to cooperate with police too. Police took to me the register to sign of court order

No Feminists will intrude pic.twitter.com/anyKd3gzr8 Travancore Devaswom Board to move SC on Monday

The Travancore Devaswom Board, which manages the Sabarimala shrine, would move the Supreme Court on Monday seeking more time to implement its order allowing women of menstrual age to offer prayers at the Lord Ayyappa temple.

"We will move the Supreme court on Monday through Advocate Chandra Uday Singh" TDB President A Padmakumar was quoted as saying by PTI.

Drones being used for security surveillance

In Balrampuram near Thiruvananthapuram, protesters attacked a KSRTC bus and damaged its windows, he added.

Thousands of pilgrims offered prayers at Lord Ayyappa temple in Sabarimala early Saturday, the first day of Malayalam month of 'Vrischikom,' even as a 12-hour shutdown against the preventive detention of a Hindu Aikya Vedi leader began. Pilgrims, including children, queued up in large numbers since the temple opened at 3 am, PTI reported.

The route through Sathram and Pullumedu is an alternative forest route for pilgrims to Sabarimala. Entry through this route is only allowed from 7 am to 2 pm. Today, 73 people have gone this way since morning. Over 120 police officers along with additional forest department staff are stationed at Sathram alone.

Few pilgrims take this route as it is considered a tougher trek due to the presence of wild animals. The decision of the Travancore Devaswom Board (TDB), the autonomous body responsible for the running of the Sabarimala shrine, to seek more time from the Supreme Court to implement its order on the entry of women of all age groups to the temple is a step in the right direction.  Read more

Yesterday, after a 14-hour standoff, social activist Trupti Desai, who landed in Cochin airport from Mumbai to undertake the pilgrimage, was sent back due to protests by devotees.

Read |‘Trupti Desai has a dictatorial attitude, doesn’t like her colleagues to get spotlight’

Desai, who arrived at the airport with six women colleagues, said she would return as police informed her that there would be law and order problem if she visited the shrine. However, she vowed to come back to the state soon to have darshan of Lord Ayyapa. The activist was also greeted by protesters upon return outside the Mumbai airport. She and the other women had to be escorted with the help of CISF (Central Industrial Security Force) jawans and Mumbai police personnel.

Amid tight security, the shrine opened on Friday for the third time, ever since the SC judgment, in the presence of head priest Kandararu Rajeevaru. However, no girl or woman pilgrim in the 10-50 age group could offer prayers so far. The 41-day mandalam festival will conclude on December 27 after Mandala pooja, when the shrine will close after the 'Athazhapuja' in the evening. It would reopen for the Makaravilakku festival on December 30.

Kerala Chief Minister Pinarayi Vijayan sought cooperation from everyone to ensure that the two-month-long pilgrimage season at the Lord Ayyappa temple in Sabarimala passes off peacefully.