Sabarimala temple row HIGHLIGHTS: Security is heightened in Kerala as Sabarimala temple opens for the first time since the historic Supreme Court verdict that allows women of all ages inside the premises. Follow this space to track all the latest news

Sabarimala Temple Row Live Updates: Amid threats of “mass suicides” and disruption, the famous Sabarimala Temple in Kerala opened its doors on Wednesday evening at 5 pm —  including for women devotees of all ages. Tensions are running high in Kerala as the gates to the hill shrine have been opened for the first time since the Supreme Court lifted the age-old entry ban on women in the 10-50 age group.

At least one elderly woman was hurt in the violent protests that took place in Nilakkal near the Sabarimala base camp. The police took to lathicharge as protesters pelted stones at those trying to trek to the Sabarimala shrine. The media personnel, including female journalists, present at the site were also attacked and threatened by the protesters who asked them to turn off their cameras and return.

Two women who tried to undertake the 5-km trek from the base camp at Pamba river were forced to return after walking for a few metres.

Earlier today, as devotees made their way to the shrine, the police detained multiple protesters for blocking the pilgrims. Representatives of the Thantri (priest) family and members of the Pandalam Royal family were also detained. The BJP, in a warning to Kerala Chief Minister Pinarayi Vijayan, said, “The protest will change the face of Kerala.” Kerala BJP leaders also warned of “severe consequences” if the police lathicharge “Hindu devotees.”

Amid series of protests, Sabarimala Temple in Kerala will today allow women devotees of all ages inside the shrine. Follow LIVE UPDATES in Hindi, Tamil, Malayalam

Kerala: A bus, carrying journalists among other passengers, was vandalised at Laka near Nilakkal base camp by protesters this evening. Stones were pelted on the bus. #SabarimalaTemple pic.twitter.com/5JVJtRLLmQ

Photos of devotees outside Sabarimala

In light of violent protests against the Supreme Court judgment allowing women to enter the Sabarimala shrine, the National Commission for Women urged the Kerala police to ensure security of women who wish to offer their prayers at the temple. The NCW demanded stringent action against the protesters and also asked DGP Kerala Loknath Behera to submit a detailed action report.

#WATCH #Kerala: Police personnel vandalise vehicles parked in Pampa. Incidents of violence had broken out today in parts of the state over the entry of women of all age groups in #SabarimalaTemple. pic.twitter.com/xi3H4f5UUU

#WATCH: Prayers being offered at #SabarimalaTemple after its portals opened at 5 pm; devotees can offer prayers till 10.30 pm today. #Kerala pic.twitter.com/rBuneRDatN

RSS-BJP behind the attacks on devotees: Kerala minister EP Jayarajan

Kerala minister EP Jayarajan addressed the media on the issue of violence near the Sabarimala temple on Wednesday, ANI reported. Blaming it on the RSS, he said, 'RSS criminals hid in forests and attacked the Ayappa devotees. 10 media personnel, 5 devotees and 15 policemen were attacked.'

He further said, '10 KSRTC buses were damaged. Devotees from other states were beaten up and sent back. RSS-BJP is behind all of this. Supreme Court rule applies to all, the govt is just following and implementing it.'

#Kerala: ANI reporter Karam Ingerlose was slapped by protesters, his phone was snatched and broken into pieces by them when he was shooting a video in Erumely. The protesters asked him to apologise for shooting the video & let him go only after he apologised. #SabarimalaTemple

At least three journalists were assaulted, media vehicles and OB vans vandalised by protesters as they ran amok at Nilackal, it was later that the police resorted to lathi-charge and stone-pelting again resulting in journalists being caught in the cross fire @IndianExpress

Visuals from the site of protest 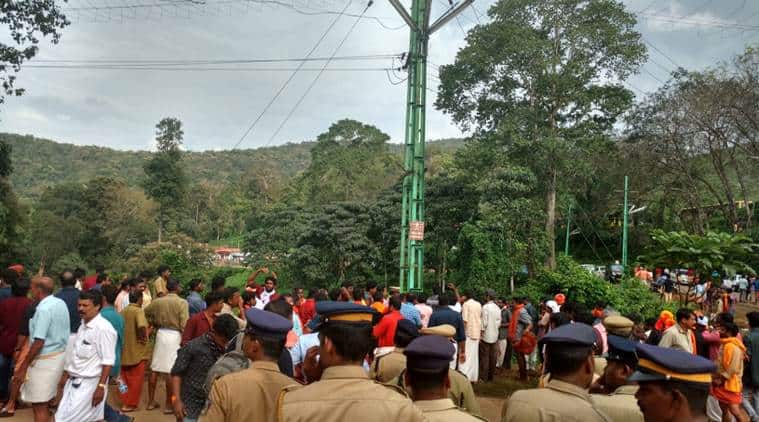 Section 144 is to be imposed in four areas - Nillakkal, Pamba, Sannidhanam and Elavumkal - tomorrow, The News Minute quoted Pathanamthitta District Collector PB Nooh as saying. He further said that there would be no obstruction to peaceful pilgrims tomorrow, and permissions will not be granted for any protests whatsoever.

The devotees can offer prayers at the Sabarimala shrine till 10.30 pm today. The portals will remain open till 22nd October.

Sabarimala opens for all

Amidst ongoing protests, the Sabarimala shrine has been opened for monthly rituals.

Visuals of protests from Pamba as protests continue against SC's verdict over the entry of women of all age groups in #SabarimalaTemple. #Kerala pic.twitter.com/jNilEVmeET

Sabarimala protests turn violent: Here is what happened so far

Protests intensified Wednesday as the famed shrine of Lord Ayyappa in the Sabarimalatemple in Kerala is set to open its doors to devotees, weeks after the Supreme Court allowed entry to women of all ages.

The agitation against the apex court verdict shifted to Nilackal and Pamba, the two main base camps of Sabarimala, and had turned violent.  Despite the high security and assurances from Chief Minister Pinarayi Vijayan, two women pilgrims were forced to turn back fearing for their safety. Several women journalists were heckled and protesters pelted stones at media vehicles.

Here is what happened so far

BJP leader MS Kumar took on the LDF government for its failure to maintain law and order in the state as protests at Nilakkal turned violent. "LDF govt is fully responsible for any law and order situation in the state. It's a very unfortunate situation, we aren't responsible. No BJP worker is involved, we're condemning that attempt," he said.

WATCH VIDEO: Journalist in police van, was attacked by protesters

#WATCH: India Today journalist Mausami Singh and its crew in a police vehicle. They were attacked by the protesters at Nilakkal base camp. #SabarimalaTemple #Kerala pic.twitter.com/R7rsSBK8fx

Activist Rahul Easwar has been arrested by from Nilakkal base camp&a non-bailable FIR has been registered against him. He is kept at Pamba police station.Easwar says to ANI 'I didn't hit any woman there. I was moving to the other direction. It's a vendetta against me.' (file pic) pic.twitter.com/T7t25hJ1Kq

Map showing Sabarimala shrine and Nilakkal, the base camp where violent protests took place on Wednesday.

The Sabarimala temple was once owned by the royal family of Pandalam, and its administration was handed over to the then princely state of Travancore in 1949. The Lord Ayyappa temple has traditionally barred all women of menstruating age considering them as "impure." Ever since the Supreme Court lifted the ban, series of protests have rocked Kerala. The Pinarayi Vijayan government has extended support to the judgment and will not file a review petition.

Read: Everything you need to know about the unique temple, its myth and pilgrimage

Heavy security has been deployed as the temple opens today. With chants of "Swamiya Saranam Ayyappa" hailing the Lord, women devotees picketed the road at Nilackal and checked buses and private vehicles for girls and women of the "banned" age group and forced them to abandon their pilgrimage to the shrine which also involved a 6-km arduous hill trek.