Sabarimala HIGHLIGHTS: BJP leaders made to use public transport to reach Pamba from Nilakkal

Sabarimala HIGHLIGHTS: Around 2,300 personnel, including a 20-member commando team and 100 women personnel, are deployed to ensure security at the hill shrine.

Amid heightened security, the doors of the Sabarimala temple opened for the public Monday for two days for the “Chitira Atta Thirunal” puja, marking the birthday of the last king of the princely state of Travancore, Chithira Thirunal Balarama Varma. The temple will close Tuesday at 10 pm after the ritual.

The temple was reopened for the second time yesterday since the Supreme Court lifted the age restriction on women entering the hill shrine. The violent protests last month had forced the police to impose prohibitory orders in Pamba, Nilakkal, Erumeli and Elavunkal, located at the base of the hill. Scores of protesters were present on Monday as well to bar women from entering the temple.

On Monday, only one woman, a 26-year-old, was seen trying to enter the temple. However, she later told the police at the base camp at Pamba that she was not keen on continuing the trek. Meanwhile, BJP state president P S Sreedharan Pillai sparked controversy after an audio tape emerged of him telling a gathering that the violent protests in October were “almost planned” by the party.

Around 2,300 personnel, including a 20-member commando team and 100 women personnel, are deployed to ensure the security of devotees.

Sabarimala temple is open for a two-day ritual known as Chithira atta thirunal. Follow HIGHLIGHTS below. Read in Malayalam

RSS leader climbs sacred steps without offerings for the deity

A row broke out in Sabarimala over the violation of tradition when an RSS leader and a temple board official climbed the sacred 18 steps without carrying the customary "Irumudikettu" (offerings carried by devotees for the deity), PTI reported. Television channels aired visuals of Valsan Thillankeri, the RSS leader, at the golden 18 steps which lead to the sanctum sanctorum without the offerings. However, Thillankeri said he had not violated any customs and claimed to have climbed the steps carrying the offerings, reported PTI.

Temple doors to open at 5pm, close at 10pm

'Namajapa' (prayer) session by devotees in progress at Sabarimala Sannidhanam. The temple doors will open at 5pm and will close at 10pm to mark the end of 'Chithira Atta Vishesham'

A 'namajapa' (prayer) session by devotees in progress at Sabarimala sannidhanam, the temple doors open at 5pm and will close at 10 pm to mark the end of 'chithira atta vishesham' @IndianExpress pic.twitter.com/8GUFh6Maee

Devotees waiting for the Sabarimala temple doors to open at Sannidhanam.

BJP leaders A N Radhakrishnan and P K Krishnadas during a 'namajapam' (prayer) session at Pamba. The leaders were earlier made to use the state transport services to reach Pamba from Nilakkal after their private vehicle was disallowed along the route. Pilgrims to Sabarimala taking a dip in Pamba, the river's water level has dipped down alarmingly in recent days @IndianExpress pic.twitter.com/Vlbmj55fhn

State BJP leaders, including A N Radhakrishnan and P K Krishnadas, were reportedly stopped at Nilakkal as they were travelling in a private car. They have taken a state transport bus to Pamba. The police is not allowing private vehicles to travel between Nilakkal and Pamba. KSRTC has regular shuttle services to transport devotees.

There is heavy deployment of police around Sabarimala on Tuesday. There are no reports of any young women wanting to climb the hill shrine this morning. Meanwhile, here are some pictures from the base camp of Pamba. (Express Photos/Vishnu Varma) 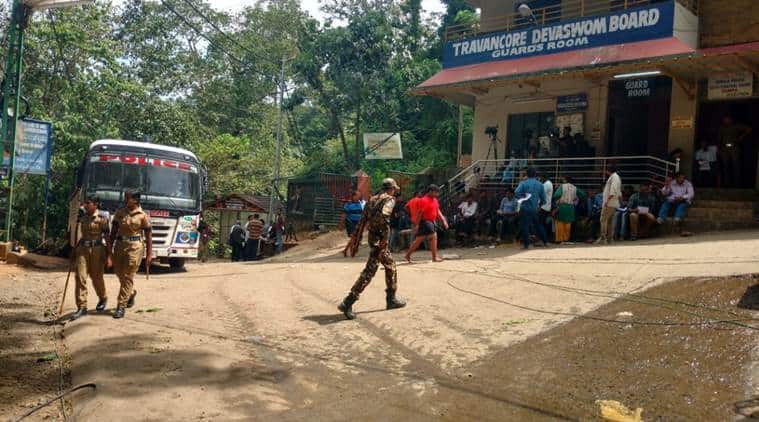 On Monday, only one woman attempted to enter Sabarimala. Anju, in her late 20s, arrived at Pamba with her husband and two children in a bid to go to Sabarimala, becoming the first woman in the 10-50 age group to attempt to climb the hill shrine after the temple opened for ‘Chithira atta vishesham’ ritual.

However, a police officer at the Pamba police control room confirmed she would return home. The woman and her family, from Alappuzha district, held discussions with top police officers on Monday evening and the police is reported to have conveyed to them the security concerns in climbing up the hill. Read more here.

A cameraperson from Mathrubhumi was attacked by protesters after he climbed on top of a sunshade at Sannidhanam.

A 52-yr-old woman, Lalitha from Thrissur, was surrounded by protesters at Sannidhanam after they suspected that she was not above 50 years of age. She told reporters that she had come for her grandchild's 'choroonu' (first rice-feeding ceremony) at the Pamba Ganapathy Temple and that the police had checked her ID card and cleared her entry.

Lalitha was injured in a scuffle which ensued after she reached the top. She's currently at the Sannidhanam hospital and still wants to visit the temple. After protesters found out that her age was cleared, devotees themselves are providing security for her to visit the temple. 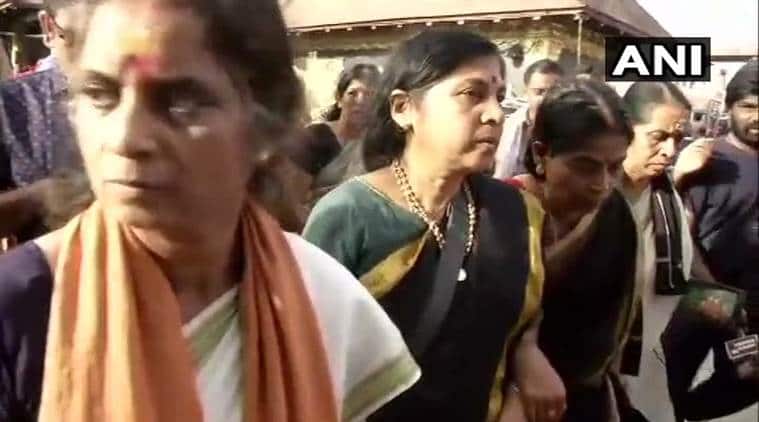 Reporter injured in scuffle at Sabarimala

There are reports of a journalist being injured in a scuffle outside Sannidhanam police station.

On Day 2, situation tense at Sabarimala

Sabarimala opened at 5 pm on Monday amid heightened security for a two-day ritual which will end tonight. There were several protesters at the temple to bar women from entering, despite the Supreme Court's order allowing women of all ages to enter the hill shrine. There was one woman, a 26-year-old, who made her way till the base camp at Pamba, but later told the police that she did not want to continue the journey. The temple will remain open till 10 pm tonight. Follow our LIVE blog for the latest news and updates.

The 26-year-old woman who wants to trek to the Sabarimala hill shrine has been identified as Anju. Her husband Abhilash and children aged 7 and 4 years are with her. "She is at the police control room here now. She says she wants to trek to the hill shrine. No decision has been taken so far on whether to take her to the temple or not today," a police official told PTI. As the news spread, a large number of devotees gathered at a local auditorium and began chanting Lord Ayyappa mantras to protest the arrival of the young woman.

The chief priest of Sabarimala temple Kandararu Rajeevaru denied reports that he consulted with BJP Kerala chief P S Sreedharan Pillai on closing the shrine if women in 10-50 age group entered it. "I only discussed that (closing the temple if women between 10-50 yrs of age come to sanctum sanctorum) matter with my family members and I did not discuss anything with the BJP chief of Kerala and I have nothing more to add to it," ANI quoted the priest as saying.

A row erupted earlier in the day after Malayalam news channels aired a video clip in which Pillai purportedly said that the temple’s chief priest consulted him before threatening the closure of the shrine if women in 10-50 age group entered it.

A large police contingent, including cops in riot gear and constables, are outside the Pamba control room where a 26-year-old woman, along with her husband and two kids from Cherthala, has approached the police to climb up the Sabarimala hill. While the woman is reported to have changed her mind and wishes to return, her husband wants to visit the Sabarimala temple along with his family. However, it has been learnt that the family members of the couple have told police not to let them climb the shrine as could be dangerous.

A 26-year-old woman, along with her husband and two kids from Cherthala, has approached the police to climb up the Sabarimala hill. Police are verifying their background at the Pamba control room and it is not clear if they will be allowed to go. The family had first wanted to go to the Pamba Ganpathy temple, till which women are allowed.

Kerala: Devotees climb the sacred Pathinettam Padi to enter #SabarimalaTemple to offer prayers. The temple, which opened this evening, will be closed after the 'Athazha puja' tomorrow evening. pic.twitter.com/jfLfc0A6jt

Sabarimala issue a golden opportunity for us: BJP Kerala chief kicks up row

BJP Kerala chief P S Sreedharan Pillai’s purported remarks on Sabarimala kicked up a storm on Monday after Malayalam news channels aired a video clip in which he purportedly said that the temple’s chief priest consulted him before threatening the closure of the shrine if women in 10-50 age group entered it. In the video, Pillai was also heard telling party workers: “Sabarimala issue is a golden opportunity for us.” He also claimed that the agitation was “BJP’s agenda”. Read the full story here.

More crowds than usual this year at Sabarimala

More crowds than usual this year as compared to the same day in previous years. However, things have calmed down at Nilakkal and Pamba. Earlier there were reports that devotees, who arrived at Erumeli since Sunday evening, protested this morning for not being allowed to leave for Pamba and Sannidhanam. They blocked traffic chanting 'Ayyappa Sarnam'.

In the wake of the violent protests last month, police arrested at least 3,700 people in various cases, which according to the Sabarimala Action Committee, an umbrella organisation of various Hindu outfits, had not dampened their spirits.

“Thousands are now moving towards Sabarimala from across Kerala to prevent the entry of young women to the temple. The agitators include women above the age of 50. We have squads who are ready to sacrifice their lives if young women enter the shrine,’’ said a senior SAC leader.

Sources also said that the protesters will be dressed as pilgrims. “They will carry the irumudi kettu (travel pouch) of genuine pilgrims. Police cannot prevent a devotee carrying the travel pouch. This time, we are mobilising volunteers at the temple itself to prevent entry of young women,” a source said.

Committee convener and VHP leader S J R Kumar said even the presence of young women journalists at the hill shrine would aggravate the situation.

After closing Tuesday, the temple will open again for the two-month-long annual festival, which is expected to attract around five crore devotees on November 17, four days after the SC is to hear a clutch of review petitions.