On Saturday, thousands of people took to the streets in Kochi to protest against the implementation of the Supreme Court verdict even as activist Trupti Desai announced plans to visit the hill shrine. 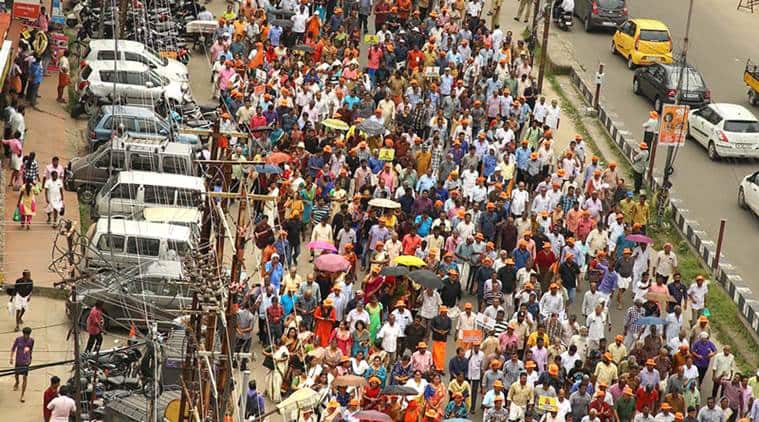 Devotees, mostly women, take part in the ‘namajapa’ (chanting the name of Lord Ayyappa) march against the Supreme Court verdict on the entry of women of all ages into the Sabarimala Lord Ayyappa Temple, in Ernakulam. (PTI)

As protests continued against the implementation of the Supreme Court verdict allowing women of all age groups into Sabarimala temple, the Kerala Police on Saturday registered a case against actor Kollam Thulasi for saying that “women who dare to enter Sabarimala temple should be torn into two pieces”.

The FIR against Thulasi, who had contested as a BJP candidate in the 2016 assembly elections, was registered on a complaint by Ratheesan, a local leader of the DYFI, the youth wing of the CPI(M). The actor was booked under Sections 295A (outraging religious feelings), 298 (uttering words with intention to wound religious sentiments), 354A (making sexually coloured remarks) of the IPC. He has also been booked under Section 119A of the Kerala Police Act, which deals with sexual gestures or acts in public places degrading the dignity of women. The Kerala State Women’s Commission registered a suo motu case against Thulasi.

Under fire for his remarks, Thulasi on Saturday tendered an apology. “I should not have made those statements. I reacted in such a manner due to my extreme devotion. I am withdrawing that statement and offering an apology if my words have hurt anyone. I got carried away by the enthusiasm of mothers who had taken part in that prayer meeting. My words only reflected the pain of a devotee of Ayyappa,’’ he said, adding that he would continue to take part in prayer meetings.

On Saturday, thousands of people took to the streets in Kochi to protest against the implementation of the Supreme Court verdict even as activist Trupti Desai announced plans to visit the hill shrine. Though the CPM-led LDF government has not yet reacted to Desai’s planned trip, it evoked sharp reactions from Ayyappa devotees and the BJP, which is campaigning against the entry of women into the hill shrine.

Reacting to Desai’s statement, BJP state president P S Sreedharan Pillai called hers a “dangerous approach. It is up to the faithful to prevent Desai from going to the temple. If the faithful come out to prevent Desai, BJP will support them. She should desist from visiting the shrine’’.

“I do not know whether she is a devotee or not. But she is coming to add fuel to the fire,” Pillai added. PTI quoted Desai, the ‘Bhumata Brigade’ leader, as saying in Mumbai that she, along with a group of women, would visit the temple “shortly” to offer prayers. “The ongoing agitation by devotees is the violation of the Supreme Court verdict… I want to ask the Congress and BJP whether they are against the fundamental rights of women,” she told Malayalam TV channels.

The state government, which has decided to implement the ruling, held a meeting in Thiruvananthapuram to evaluate the preparations for pilgrims arriving at the temple, which will open for monthly pujas on October 17 evening. Activist Rahul Easwar, who announced a hunger strike at Sabarimala, said they would stop Desai if she attempts to visit the Lord Ayyappa Temple. “Ours will be a Gandhian mode of protest. Hundreds of devotees will lay down on the roads leading to Sabarimala if Trupti Desai attempts to visit the shrine,” he said.