Security agencies had inputs “indicating linkages of some of the unauthorised Rohingya immigrants with Pakistan-based terror organisations and similar organisations in other countries”, the government said. 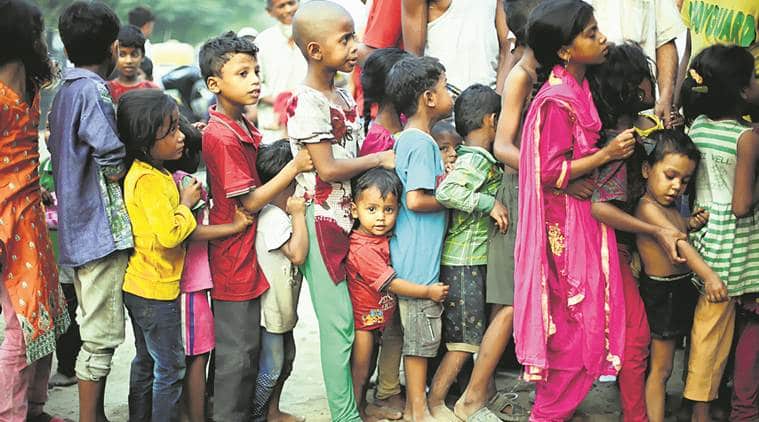 At a camp for Rohingya refugees in Delhi Monday. (Express Photo/Oinam Anand)

Underlining that any decision on illegal immigrants fell within the domain of the executive, the Centre Monday told the Supreme Court that the “illegal” influx of Rohingyas “using the porous border between India and Myanmar” and their continued stay here was “seriously harming the national security of the country”.

Security agencies had inputs “indicating linkages of some of the unauthorised Rohingya immigrants with Pakistan-based terror organisations and similar organisations in other countries”, the government told a three-judge bench headed by Chief Justice of India Dipak Misra.

The government’s 15-page affidavit was filed in the Supreme Court in response to a petition by two Rohingya refugees who have challenged the Centre’s proposed move to deport them.

Additional Solicitor General Tushar Mehta supplied a copy of the affidavit to senior counsel Prashant Bhushan who has filed the petition for the two refugees and told the court that the government will file the same in the Registry during the course of the day.

“It is submitted that continuance of Rohingyas’ illegal immigration into India and their continued stay in India, apart from being absolutely illegal, is found to be having serious national security ramifications and has serious security threats,” the document, drawn up by the Ministry of Home Affairs, said.

The affidavit said it will submit security inputs received from intelligence agencies regarding national security in a sealed cover. “Such facts will satisfy…this Hon’ble court to accept the respectful submission of the Central government that it is desirable, expedient, constitutionally imperative and in the interest of the nation to leave such a decision to the executive decision making/policy of the Central Government…”.

The affidavit stated that the “illegal influx” of Rohingyas had started from 2012-13 — when UPA II was in power.

The Centre said the right under Article 19 to reside and settle in any part of the country and to move freely throughout India was available only to citizens and not illegal immigrants. It also requested the court not to get into the exercise of examining treaties and conventions as no writ can be issued under Article 32 of the Constitution “when it is evident that such an indulgence by the highest court of the country would encourage illegal influx of illegal immigrants into our country and thereby deprive the citizens of India of their fundamental and basic human rights.”

India was “already saddled with a very serious problem of illegal immigrants” and was trying to address that in the larger interests of the country, the government contended.

“Large influx of illegal immigrants from neighbouring countries” had already caused “serious changes” in the “demographic profile of some of the bordering states” and this was “causing far-reaching complications in various contexts and is taking its toll and has a direct detrimental effect on the fundamental rights and basic human rights of the country’s own citizens,” the affidavit stated.

The affidavit said that “some Rohingyas are indulging in illegal/anti-national activities, i.e. mobilisation of funds through hundi/hawala channels, procuring fake/fabricated Indian identity documents for other Rohingyas and also indulging in human trafficking” and “they are also using their illegal network for illegal entry of others into India”. Many of them have also been able to “acquire fake/fraudulently obtained Indian identity documents i.e. PAN cards and voter cards,” the government said.

Many of these illegal immigrants, the affidavit said, also figure in the designs of ISI and ISIS who want to create communal flare-ups in the country. Rohingya militancy, it said, may further destabilise the country’s north-eastern corridor and there was the “possibility of eruption of violence against the Buddhists who are Indian citizens who stay on Indian soil, by the radicalised Rohingyas… some of them with militant background are also found to be active in Jammu, Delhi, Hyderabad and Mewat and posed a threat to national security”.

On the contention of the petitioners that the principle of “non-refoulement” prohibited the government from returning immigrants to a country where they faced threat of persecution, the government contended that this was not binding on India as it was not a signatory to the 1951 Refugee Convention.

Though India was a signatory to the International Covenant on Civil and Political Rights, its scope did not extend to non-refoulement, the affidavit stated.

The government said that the Foreigners Act of 1946 “statutorily empowers” and “casts an obligation upon the Central government to deport a person who is an illegal immigrant”.

The affidavit said that the government’s first responsibility was to the people of the country and added that providing facilities to illegal immigrants “would also have a direct adverse impact upon Indian citizens as it would deprive the Indian citizens of their legitimate share in the employment sector, subsidized housing, medical and educational facilities and would thereby culminate in hostility towards immigrants resulting into an inevitable social tension and law and order problems.”

The court will now hear the matter on October 3. The petitioners requested the court to issue notice to the NHRC so as to enable it to present its views but the court declined, saying it will first decide its own jurisdiction to examine the issue. “First we will decide the jurisdiction and what jurisdiction we can exercise”, the CJI said.

Though the petition was originally filed by senior counsel Prashant Bhushan, many senior members of the Bar including Fali S Nariman, Ashwani Kumar, Rajeev Dhavan, Kapil Sibal and Colin Gonsalves appeared in court today to defend the case of the Rohingyas.

While some had intervention applications, Gonsalves had a separate petition on behalf of Rohingyas settled in Jammu.

Former RSS ideologue Govindacharya, a Chennai-based trust Indic Collective and an advocate from Assam Somiran Sharma, too, have approached the court seeking to intervene in the mater, and demanded that the Rohingyas be deported. The court has not admitted any application yet but said it will consider all pleas when it takes up the matter on October 3.