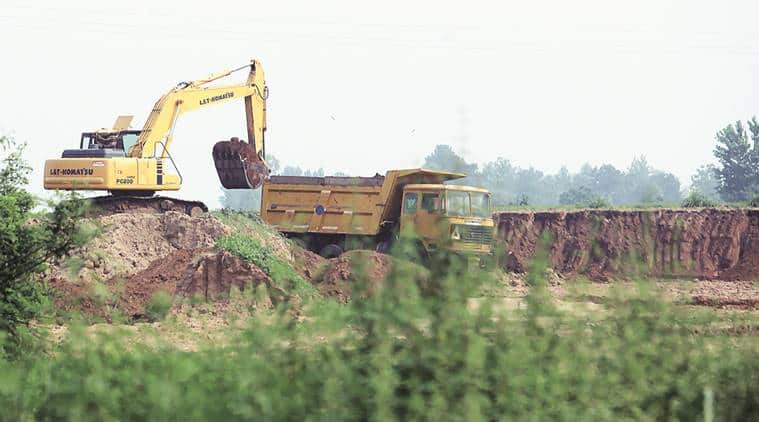 The report, which was tabled in the Assembly on Wednesday, highlights the deficiencies in detection and curbing of illegal mining activities in the state. (Express photo/Representational)

Pointing to the rise in the number of illegal mining cases in the state, the Comptroller & Auditor General of India (CAG) has pulled up the Gujarat government for failing to prevent it.

In a strict indictment of the state government, the CAG in its report for 2016-17 stated that its Industries & Mines Department allowed functioning of over 1,500 mining leases without mandatory environment clearance.

The report, which was tabled in the Assembly on Wednesday, highlights the deficiencies in detection and curbing of illegal mining activities in the state. As per the Gujarat Mineral Policy 2003, each mining lease has to be inspected once in a year to ensure implementation of terms and conditions of lease deeds, the report states, adding that the percentage of shortfall in inspections of lease holders by Gujarat government in the last five years ranged between 74.24 per cent and 89.86 per cent.. “In absence of adequate inspection of leases, the Department was unable to control the mining activities of the lessees… The illegal mining activities… which came to light during the course of audit could have been prevented had timely inspections been conducted,” the CAG report says.

Quoting the figures of Commissioner of Geology & Mining, the CAG states that the number of cases of illegal mining detected in Gujarat has increased every year, from 3,760 in 2011-12 to 7,622 in 2015-16. The penalty recovered ranged between Rs 22.04 crore and Rs 34.27 crore, it adds. In its recommendation to curb illegal mining, the CAG has asked the government to “consider putting up a system for monitoring the timely inspection of leases and for ensuring timely action on the deficiencies noticed during inspections”. “This may be in the form of periodic report/return to be furnished by the geologist to the higher authorities,” it adds.

The national auditor has highlighted that seven temporary checkposts created by the Commissioner of Geology & Mining for checking of minerals in transit and maintain registers and forms lacked many desired facilities.
The CAG has also recommended better coordination of Industries & Mines Department with other departments of the government for prevention of illegal mining. It stated that Forest Department had detected 87 cases of illegal excavation and illegal transportation in nine districts between 2011-12 and 2015-16. However, the Forest department had forwarded 66 cases to the concerned district geologist or Collector for further action. Whereas, out of 21 cases forwarded to the concerned Collectors, 19 remained pending.

The CAG report also says that the Gujarat government allowed continuation of mining activities of 1,561 applicants without mandatory environmental clearance. As per the directions of the Ministry of Environment and Forests (MoEF), all mining activities were required to obtain the clearance from respective authorities. “Leases with area up to 50 hectares would be considered by respective State Level Environment Impact Assessment Authority (SEIAA) and leases up to five hectares would be considered by respective District Level Environment Impact Assessment Authority (DEIAA),” notes CAG in its report while citing a notification of MoEF. “As per the information furnished…out of total 3,448 applications received (between May 2014 and March 2017) for grant of environment clearance, 1,561 applications remain pending (45 per cent) for clearance by SEIAA/DEIAA. The Department allowed the continuance of leases without the environment clearance.”

Gujarat: Why were jantri rates not revised in last 5 years, asks Congress