Republic Day-like event planned for unveiling of Statue of Unity

Rehearsal were held several times ahead of PM Modi’s arrival in Gujarat Tuesday evening to dedicate the 182-metre tall statue of Patel at Kevadia Colony near Sardar Sarovar Dam in Narmada district on Wednesday. Laser lights tested ahead of unveiling of the statue on October 31. (Express photo by Bhupendra Rana)

Planned Along the lines of the Republic Day celebrations at Rajpath, the events celebrating the unveiling of the Statue of Unity by Prime Minister Narendra Modi on the 143rd birth anniversary of Sardar Vallabhbhai Patel will witness fly pasts by the Indian Air Force, playing of patriotic music by ceremonial bands of the Army, Navy, IAF, and folk dance performances from Punjab, Assam, Mizoram and Gujarat.

Rehearsal were held several times ahead of PM Modi’s arrival in Gujarat Tuesday evening to dedicate the 182-metre tall statue of Patel at Kevadia Colony near Sardar Sarovar Dam in Narmada district on Wednesday. More rehearsals are likely to be carried out on Tuesday in the presence of senior government officials. The inauguration ceremony is likely to be three-hour long after which the PM is likely to return to Delhi. Surya Kiran of the Indian Air Force will perform aerobatics in the sky over the statue, while spreading the colours of Indian flag in the sky. At the same time, a team of Jaguar fighter aircraft of the IAF will also fly, and a team of MI-17 choppers will shower rose petals on the statue.

The Prime Minister is also going to inaugurate a Wall of Unity near the statue that will showcase earth samples collected from various states across the country.

Prime Minister Modi is also scheduled to address a public gathering on the occasion. At a grand cultural programme, which will follow, the PM will be welcomed by the bands of the armed forces, Gujarat Police, SRP, CRPF and BSF, and cultural troupes from 29 states and two Union Territories. 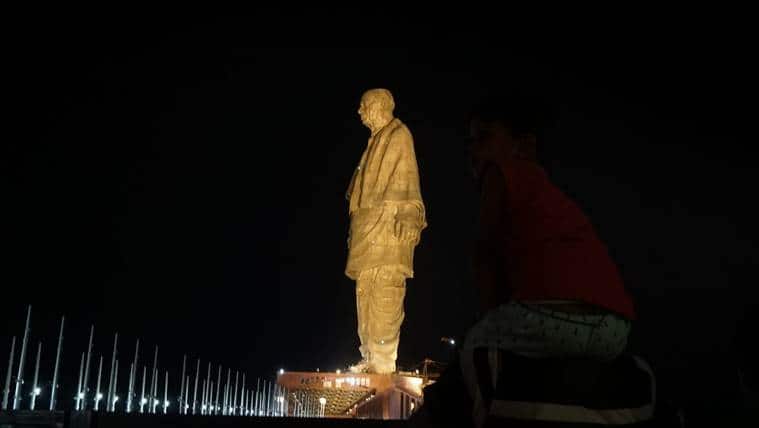 Various selfie points have been erected by the authorities at the Valley of Flowers with the Statue in the backdrop. (Express photo by Bhupendra Rana)

Chief Secretary J N Singh Monday visited the site to take stock of ongoing preparations. “We have invited dance troupes from across the country to perform here during the inauguration. Air Force planes and helicopters would shower flowers on the statue during unveiling. I am here today to see how we can synchronise them” Singh told reporters.

In a series of photos, marking the “milestones” of the project, the government said, “When Prime Minister Narendrabhai Modi will dedicate the memorial to the nation on 31st October, 2018, his dream is going to be a reality. The Statue of Unity, for which he had performed the ground-breaking ceremony, is now not only the pride for Gujarat, but also for the nation. It would have not been possible to realise (the dream) without strong determination and political will. A Gujarati has done this”.

Meanwhile, the government announced a change in the PM’s schedule. Earlier, Modi was scheduled to arrive at Kevadia Colony from Delhi on October 31. However, now it has been planned that the PM will arrive in Ahmedabad on the evening of October 30. A top state government officer said that the PM will stay at Raj Bhavan in the night and then to go Kevadia Colony in a chopper, the next day. 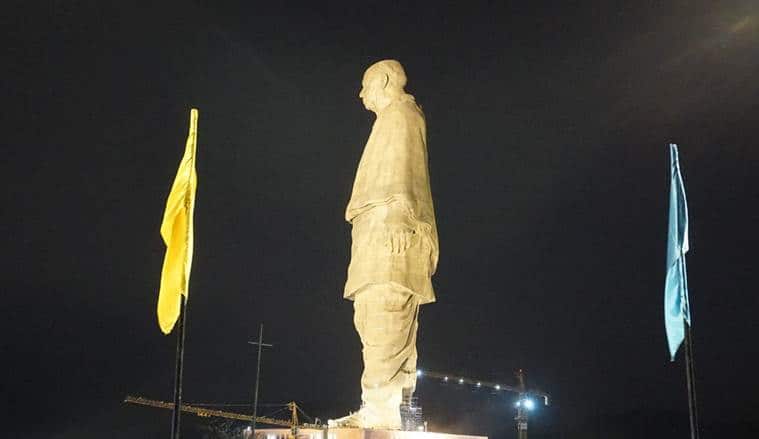 Prime Minister Modi is also scheduled to address a public gathering on the occasion. (Express photo by Bhupendra Rana)

At the foundation of the statue, an exhibition on Sardar Patel’s life has been designed in the form of light and sound show. The 73-feet high exhibition hall, spread over 4,647 square metre, will have details on Patel’s life collected from various archival places in the country — National Archives of India, Nehru Memorial, Rashtrapati Bhavan, National Gandhi Museum, All India Radio, Parliament Library, National Film Development Corporation, MJ Library in Ahmedabad among others.

As part of the effort to make the region around the statue a tourist spot, state authorities have developed projects like Valley of Flowers and Tent City.

Various selfie points have been erected by the authorities at the Valley of Flowers with the Statue in the backdrop.

A huge tent city with 250 tents for tourists for night stay has also been developed near the statue site. Tourists staying at the Tent City will be provided transport facility to and fro Vadodara.