India Republic Day Parade 2020, Flag Hosting HIGHLIGHTS: India is celebrating its 70th Republic Day Today. The celebration at Rajpath started with Prime Minister Narendra Modi paying homage to the fallen soldiers at the newly-built National War Memorial on the Republic Day for the first time instead of the Amar Jawan Jyoti beneath the India Gate arch. This was followed by President Ram Nath Kovind unfurling the tricolour. The occasion marks the day when India’s Constitution came into effect, and the country became a republic.

Heavylift helicopter Chinook and attack helicopter Apache, both recently inducted in the Indian Air Force, took part in the Republic Day flypast for the first time on Sunday. The Chinooks can airlift diverse loads in remote locations.

The entire national capital has been put under a multi-layered, ground-to-air security cover with thousands of armed personnel keeping a tight vigil over it.

Brazilian President Jair Messias Bolsonaro, who was the chief guest for the Republic Day celebrations, was accorded the ceremonial Guard of Honour at the Rashtrapati Bhawan by President Kovind and Prime Minister Narendra Modi.

Heavylift helicopter Chinook and attack helicopter Apache, both recently inducted in the Indian Air Force, took part in the Republic Day flypast for the first time on Sunday. The Chinooks can airlift diverse loads in remote locations. It is a heavy lift, twin rotor helicopter which has enhanced IAF's lift capability across a range of military and HADR missions. The Apache, on the other hand, is a versatile helicopter capable of firing air to air and air to ground missiles, rockets and front gun aided through fire control radar which can unleash havoc on the adversary. It has provided the Indian armed forces a significant edge against the enemy on the battlefield.

The tableaux of Karnataka, Uttar Pradesh and Andhra Pradesh at the Republic Day parade.

The tableaux of Karnataka, Uttar Pradesh and Andhra Pradesh at the #RepublicDay parade in Delhi pic.twitter.com/BS6xEeWsUN

Tableau of CPWD based on 'Kashmir se Kanyakumari' theme

The tableau of the Central Public Works Department is based on the theme of 'Kashmir se Kanyakumari'. It showcases the memorial of Swami Vivekananda Kanyakumari, a 'Shikara' on the Dal lake and the Sanchi Stupa, Madhya Pradesh.

Delhi: The tableau of Jammu and Kashmir being showcased at the #RepublicDay parade. Jammu and Kashmir government’s ‘Back to Village’ program is the theme of the union territory's tableau, this year. pic.twitter.com/URFbGnP7K8

Mobile phone services were snapped in Kashmir on Sunday as a precautionary measure for ensuring smooth passage of Republic Day celebrations in the valley, officials said. While mobile internet services were suspended hours after their restoration on Saturday, mobile phone connectivity was suspended in the early hours of Sunday, they said.

Continuing his tradition of donning colourful turbans on Republic Day and Independence Day celebrations, Prime Minister Narendra Modi sported a saffron 'bandhej' headgear with a tail for Republic Day on Sunday. Wearing his traditional kurta pajama and jacket, Modi paid homage to the fallen soldiers at the newly-built National War Memorial here on the Republic Day for the first time instead of the Amar Jawan Jyoti beneath the India Gate arch.

The 'Dhanush' gun system, commanded by Capt. Mrigank Bharadwaj, was part of the Republic Day celebrations at Rajpath for the first time on Sunday. The 155mm/45 Caliber Dhanush gun system is a towed Howitzer designed indigenously by the Ordnance Factory Board. The gun with a maximum range of 36.5 km has the capability of automatic gun alignment and positioning. The gun, which is equipped with inertial navigation system and advanced gun sighting system, has been designed to meet futuristic requirements of the Army.

The Indian Navy showcases its assets like Boeing P8I Long Range Maritime Patrol aircraft and the Kolkata Class Destroyer and the Kalvari Class submarine. The indigenous aircraft carrier Vikrant under construction at the Cochin Shipyard. 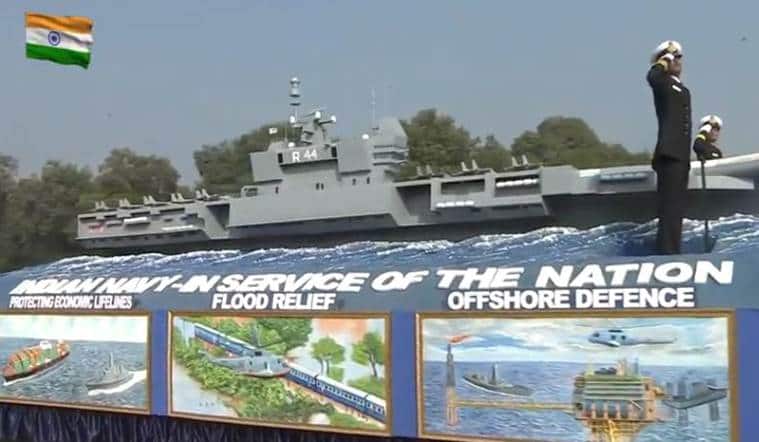 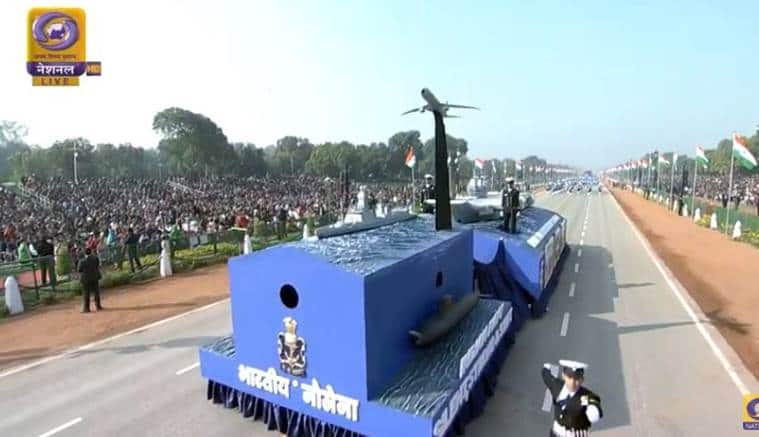 Watch | The 71st Republic Day parade is underway at Rajpath 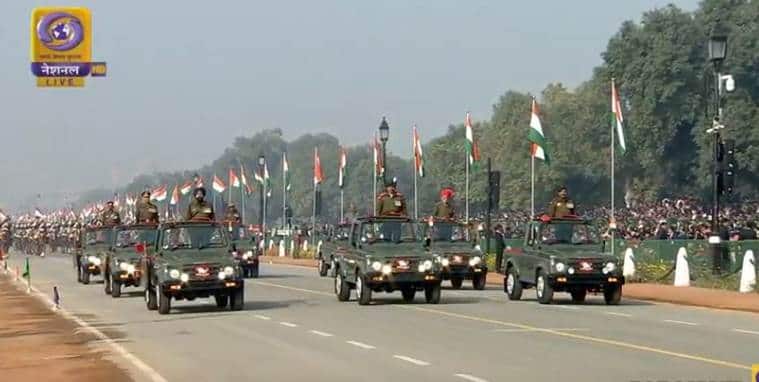 21 Gun Salute is being presented

The 21 Gun Salute is presented by 2,233 Field Battery under the command of Lieutenant Colonel C Sandeep.

Delhi: The 21 Gun Salute is presented by 2233 Field
Battery under the command of Lieutenant Colonel C Sandeep. pic.twitter.com/u8UmzuL8x9

President of India Ram Nath Kovind unfurls the national flag on 71st Republic Day, at Rajpath. National Anthem is being played at Rajpath. 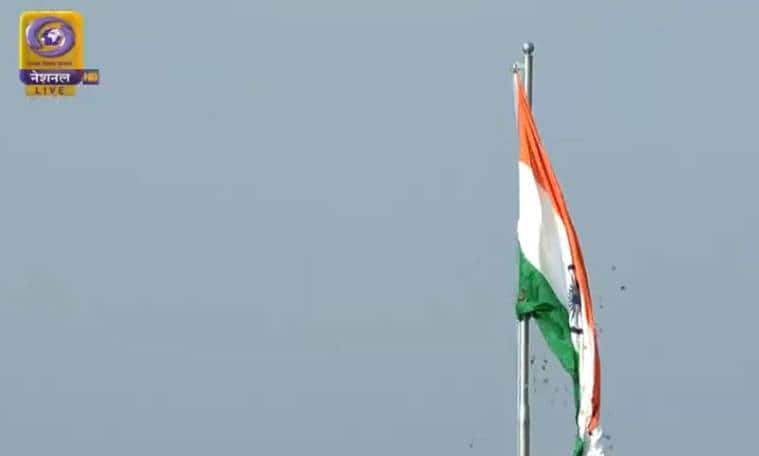 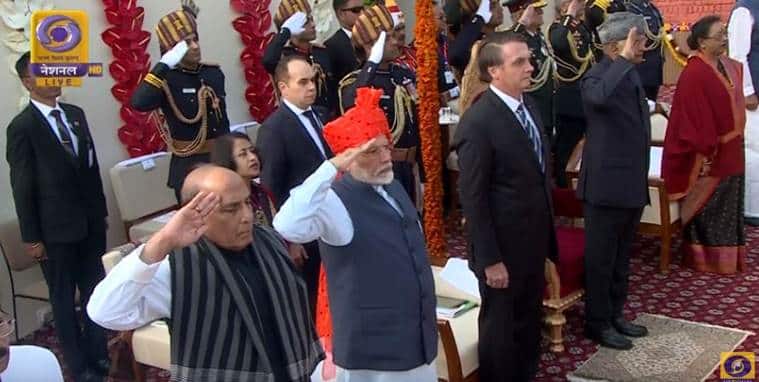 Since Narendra Modi began his second term, the world has started to see India as a country in which aggressive nationalism and religious intolerance have become a serious threat to democracy. So much so that in Davos last week, Imran Khan got away with telling an important international news channel that India was in the grip of an ideology called ‘Hindu-vata’ that was inspired by the Nazis. From a man who comes from a country that has been the epicentre of jihadist terrorism for at least three decades, that is rich, writes Tavleen Singh. Read the full piece here 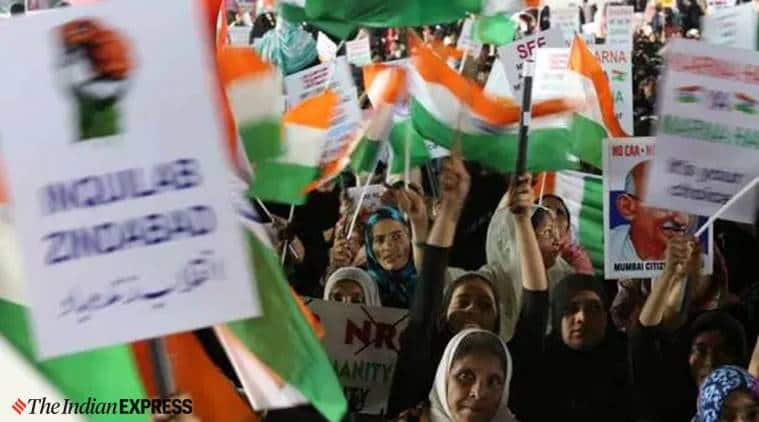 The Constitution of India was completed on November 29, 1949, yet it came into force on January 26, 1950. The date memorialised the celebration of Independence Day from 1930 by hundreds of thousands of Indians, who would gather in public, hoist the national flag and recite the pledge of independence in multiple languages, affirming that Indians were an independent people and would achieve their aims through non-violent means. Read More

President Ram Nath Kovind and his Brazil counterpart Jair Bolsonaro, the chief guest for this year's Republic Day arrive at Rajpath. Stay tuned to our live blog to get all the latest updates.

On Saturday evening, President Ram Nath Kovind addressed the nation. Stating that the Constitution gave rights to all the citizens of a free democratic nation, he also emphasised on the responsibility to always adhere to the central tenets of the democracy - justice, liberty, equality and fraternity.

In his customary address to the nation on the eve of 71st Republic Day, President Kovind said, "It becomes easier for us to follow these constitutional ideals, if we keep in mind the life and values of the Father of our Nation. By doing so, we will be adding a meaningful dimension to our celebrations of 150th birth anniversary of Gandhiji."

He also said that the youth should not forget "the gift of non-violence Gandhi gave to humanity".  The President also said that modern India comprises three organs - Legislature, Executive and Judiciary - which are necessarily interlinked and interdependent. "Yet, on the ground, the people comprise the State. 'We the People' are the prime movers of the Republic. With us, the people of India rests the real power to decide our collective future," he said.

Aided by dozens of drones in the air and hundreds of CCTV cameras and facial recognition devices, besides several anti-aircraft guns on the ground, the security personnel are keeping a hawk-eye over Rajpath, where President Ram Nath Kovind and Prime Minister Narendra Modi will be celebrating the occasion along with chief guest, Brazilian President Jair Bolsonaro and other dignitaries, besides thousands of citizens.

Citizenship Act does not violate Constitution, protects minorities from theocracies

The handcrafted Constitution is a work of art