Republic Day Parade 2019 LIVE UPDATES: The 70th Republic Day was celebrated with huge pomp and show in New Delhi as a grand parade rolled down Rajpath. Prime Minister Narendra Modi laid a floral wreath at the Amar Jawan Jyoti which was followed by the unfurling of the flag by President Ram Nath Kovind with a 21-gun salute in the background. The PM and President were accompanied by South African President Cyril Ramaphosa, who is the Chief Guest for the event.

Pics from President Kovind's 'At Home' reception at Rashtrapati Bhavan

Delhi: Prime Minister Narendra Modi met the family of Lance Naik #NazirAhmadWani, at the "At Home" function at Rashtrapati Bhavan earlier today. Lance Naik Nazir Ahmad Wani lost his life while killing 6 terrorists in an operation in Kashmir, and was awarded the Ashok Chakra today pic.twitter.com/vM3AHDMqkW

Delhi: President Ram Nath Kovind meets the family of Lance Naik #NazirAhmadWani, at the "At Home" function. Lance Naik Nazir Ahmad Wani lost his life while killing 6 terrorists in an operation in Kashmir, and was awarded the Ashok Chakra today. pic.twitter.com/0w1ZGpcf2b

Delhi: President Ram Nath Kovind meets the family of Lance Naik #NazirAhmadWani, at the "At Home" function. Lance Naik Nazir Ahmad Wani lost his life while killing 6 terrorists in an operation in Kashmir, and was awarded the Ashok Chakra today. pic.twitter.com/0w1ZGpcf2b

#WATCH: At President Ram Nath Kovind's "At Home" function, Defence Minister Nirmala Sitharaman meets the family of Lance Naik #NazirAhmadWani, who lost his life while killing 6 terrorists in an operation in Kashmir, and was awarded the Ashok Chakra today. pic.twitter.com/O7KOeSelzJ

At-home ceremony underway at the Presidential House
INA veterans, all aged over 90 years, participated in the parade for the first time

A major highlight of the parade was the participation of four Indian National Army (INA) veterans — Parmanand, Lalti Ram, Hira Singh and Bhagmal, all aged over 90 years, for the first time. The other highlights include the display of American howitzers M777, the Main Battle Tank (MBT) T-90 and indigenously developed Akash weapons system 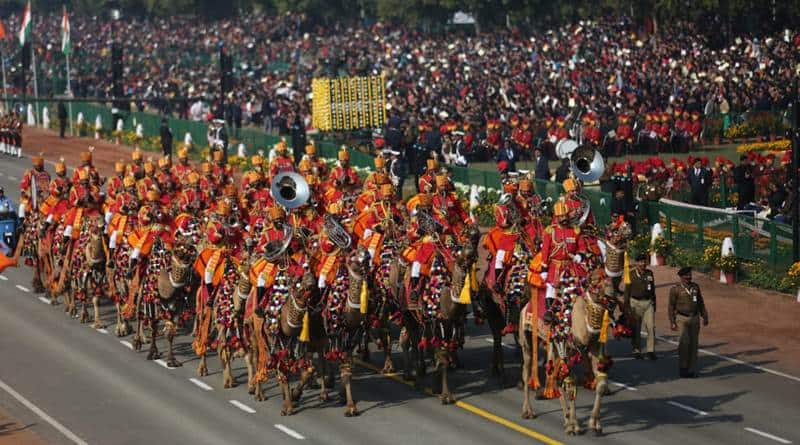 The marching contingents of the Army included the Madras Regiment, the Rajputana Rifles, the Sikh Regiment and the Gorkha Brigade. (Express photo: Tashi Tobgiyal)

Lance Naik Nazir Ahmad Wani, who was a militant-turned-soldier who laid down his life fighting a group of terrorists at Kashmir's Shopian in November last year, was awarded the Ashoka Chakra by President Ram Nath Kovind Saturday. The award — India’s highest peacetime gallantry honour — was received by Wani’s wife and mother at the Republic Day celebrations at Rajpath. Wani is the first Kashmiri to be conferred the Ashoka Chakra.

Explained: Why India-South Africa relations are unique this R-Day

This is the second time a South African Head of State is Chief Guest for Republic Day — the first occasion was in 1995 when the late Nelson Mandela visited. In the five years of the Narendra Modi government, leaders from countries in four continents have been Chief Guests at India’s Republic Day.  Last year, the celebration of India’s 69th Republic Day was attended by the leaders of 10 ASEAN countries.

Many firsts of Republic Day Parade 2019

The CISF, which is also celebrating 50 years of service to the nation, is in the Republic Day parade after a gap of 11 years. Its tableau had elements of its diverse functioning and showcased the role of women in the force. The CISF has the highest percentage of women (6 per cent) among all paramilitary forces.

In a first, four Indian National Army (INA) veterans took part in the Republic Day parade under the theme ‘Veterans: Accelerators in Nation’s Growth’. All of them were over the age of 90.

Seventy years since the birth of its Constitution, India celebrated Republic Day on Saturday with a grand annual parade at Rajpath amid heavy security cover. The ceremonial parade rolled down the majestic Rajpath with South African President Cyril Ramaphosa in attendance as the chief guest along with Prime Minister Narendra Modi, President Ram Nath Kovind, Defence Minister Nirmala Sitharaman among several other leaders. Ramaphosa is the second South African president, after Nelson Mandela, to attend the grand event as its chief guest.

The event started with PM Modi paying his tributes to the martyrs by laying a wreath at Amar Jawan Jyoti after which President Kovind unfurled the national flag with the national anthem being played in the accompaniment of booming 21 gun salute in the background. The well-coordinated gun salute by seven cannons of 2281 Field Regiment starts with the first note of the national anthem and ends with the last. Special clocks are used to measure time in smaller units for precision.

Ours is a land of peace, which has shown the way when it comes to harmony and brotherhood. At the same time, we are fully prepared to give a strong answer to those elements who disturb the atmosphere of peace and spread violence. pic.twitter.com/itprKi8PfV

Some highlights from Republic Day celebrations 2019

Among the many firsts for a Republic Day parade, four Indian National Army (INA) veterans, aged over 90 years, took part in the parade,

India's military might was also on display, with the artillery gun system M777 American Ultra Light Howitzers, recently acquired from the US, and K9 Vajra, a self-propelled artillery gun, showcased on Rajpath, being new additions this year.

Women power was on full display on the ceremonial boulevard with an all-woman Assam Rifles contingent creating history this year by participating for the first time in the parade, which was led by Major Khushboo Kanwar.

Contingents of the Navy, Army Service Corps and a unit of Corps of Signals (transportable satellite terminal) were led by women officers too.

India is celebrating its 70th Republic Day and joining the bandwagon in wishing the people are the Bollywood's famous film personalities. From Salman Khan to Vicky Kaushal stars are wishing their followers a happy republic day on the social media. Read more here

Meanwhile from Guwahati, the Northeast Frontier Railway (NFR) will honour two youths of Nagaon district's Puranigudam in a special ceremony held in the Railway Stadium in Guwahati for their “prompt action” that led to saving more than a hundred passengers aboard the train.

Bikas and Surya will receive a citation and award money of Rs 2,500 each. The duo admit that they are hopeful of better employment opportunities in the future. More here 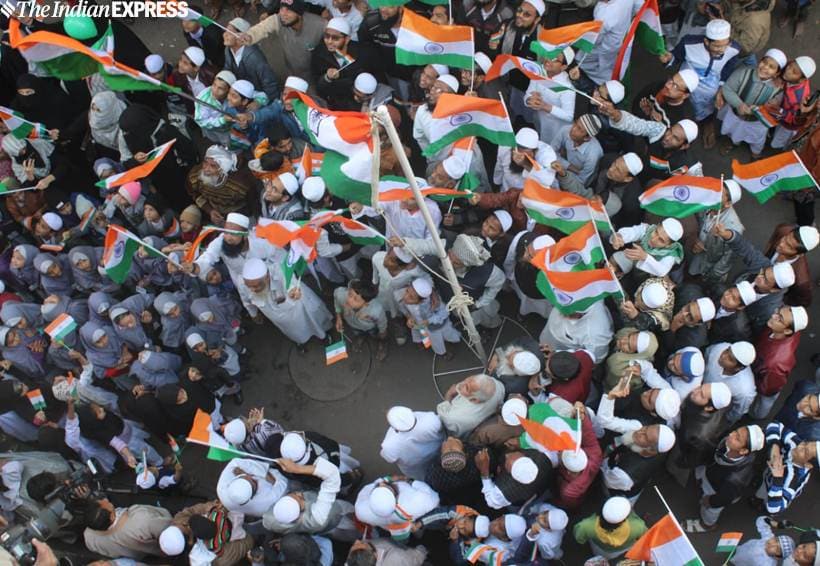 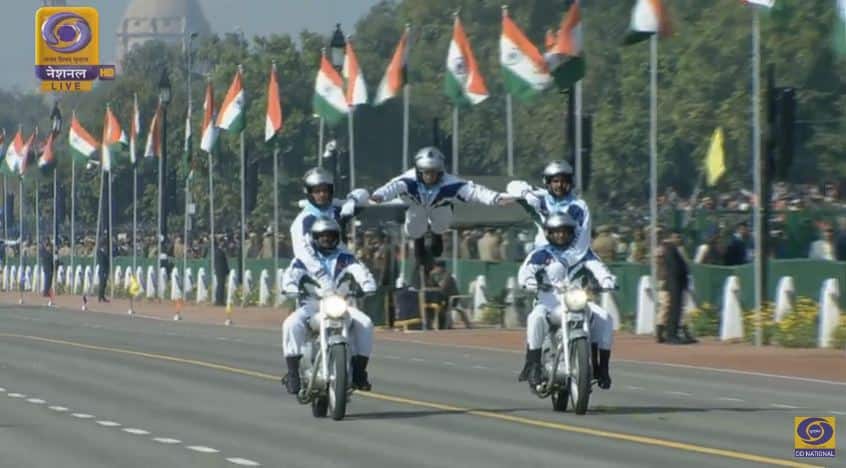 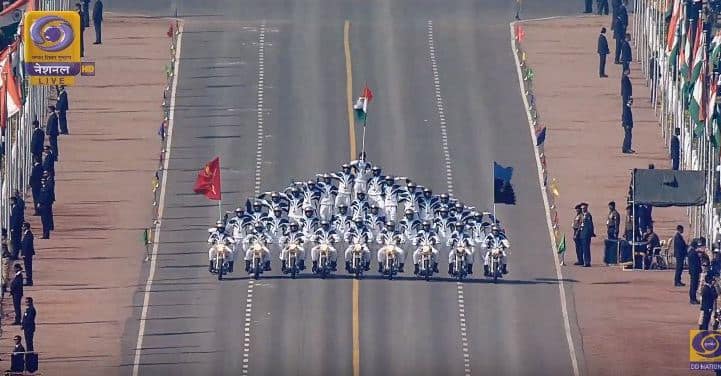 Motorcycle daredevilry at Rajpath, in yoga poses. As many as 33 people on 9 motorcycles make a human pyramid, Subedar Major Ramesh A leads this formation.

Delhi gears up for its annual pomp and parade as India prepares to celebrate its 70th Republic Day today. The parade will begin from Vijay Chowk and proceed towards the Red Fort grounds through Rajpath, India Gate, Tilak Marg, Bahadur Shah Zafar Marg and Netaji Subhash Marg.

Prime Minister Narendra Modi took to Twitter to wish the citizens on the occasion of Republic Day. He will lay a floral wreath at the Amar Jyoti Jawan before the beginning of the parade.

South African President Cyril Ramaphosac is the Chief Guest for the event this year. He will be accompanying the President to the saluting dais. The Republic Day Parade will kick off at 9.50 am. The programme can also be streamed online on Doordarshan’s YouTube channel.

It represents the diverse and yet singular urges of the people and the Republic of India. This makes the very act of voting a sacred act. Please perform this act. Who the voter chooses to vote for is up to him or her, I would only request all eligible voters to go out and vote."

Last year, which was touted as a first, 10 Heads of State of ASEAN countries were invited as chief guests for the celebrations.