Remembering Pepsu Muzara movement: ‘Govt should study our past, our history…we never gave in even during British rule’

The movement and those men were remembered at Tikri border as well as at other protest sites in Punjab. 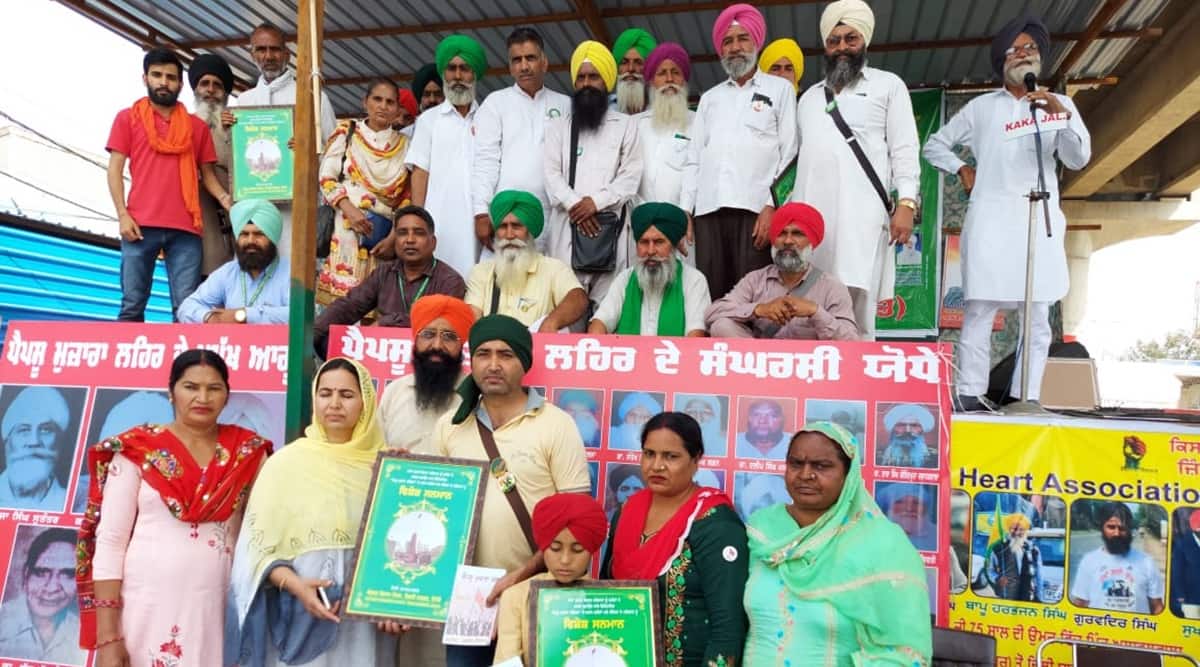 Family members of farmers who were killed and who were active leaders of Muzara Lehar movement honoured at Tikri border on Friday. Express

March 19 — the date evoked painful memories, especially at Kishangarh village of Mansa district. It was at this village that four farmers were killed on March 19, 1949, in a struggle which later came to be known as PEPSU Muzara movement.

The movement and those men were remembered at Tikri border as well as at other protest sites in Punjab. The protesting farmers reminded the government of their past and said they never gave up even during the British rule. The Muzara movement had started in the 1930s in Punjab villages which were under Patiala Riyasat. The entire province was called PEPSU soon after Independence before finally being named Punjab in the mid-50s. “Muzara was the word used for landless farmers who worked on someone’s land. This movement was started to take ownership rights of the land after tilling it for years together. Our forefathers started it in 1930s and finally, people got ownership rights in 1952 after paying one-time compensation. Earlier, the peasantry was facing slavery, exploitation and was not even able to take full produce out of their land,” said Kulwant Singh Kishangarh, from Kishangarh village, while speaking to The Indian Express. “Kishangarh village was the epicentre of protests and four farmers were killed here on March 19, 1949. Hence, our village has historic importance.”

Dr Darshan Pal, president of Krantikari Kisan Union and also a member of Sanyukta Kisan Morcha (SKM), acknowledges the contribution of the movement. “It was an important day for Punjab. The Muzara movement secured rights for oppressed tenant farmers. The family members of the martyrs were felicitated at Tikri Border protest site,” he said.

Kulwant Singh Kishangarh, who is also state committee member of BKU (Dakaunda), sheds more light on the movement. “This lehar started in 1930s under British rule when Jagridars used to seek share in the crop of farmers of many villages of Punjab falling under Patiala Riyasat that used to be passed on to Maharaja of Patiala and later to Britshers. So, the farmers were slaves of Jagirdars, Maharaja and the British. Under this movement, the farmers had refused to give foodgrains to their masters and they were punished as well,” he said.

After Independence, 784 villages of Patiala Riyasat were named as PEPSU province. In October 1948, the then Patiala Maharaja had passed orders of giving one third land of villages to Jagridars. The farmers did not accept this decision. “On March 19, 1949, the farmers confronted security forces of the Maharaja at Kishangarh. In the process, four farmers, a cop and a patwari were killed. Hence, this day is remembered for those farmers who sacrificed their lives,” Kulwant Singh Kishangarh said.

He added, “Later, the protest was intensified in all 784 villages and many farmers were jailed. However, in 1952, we won the struggle and got ownership rights of our land which we used to cultivate by paying one-time compensation. Hence, this present movement against farm laws reminds us of the struggle we had in the past as well to save our land even when we were under the British rule.”

The four farmers who had been killed were Ram Singh, Kunda Singh, Kapura Singh and one unidenified person. On Friday, family members of Kapura and Kunda Singh went to Tikri border. Bhola Singh, grandson of Kunda Singh who lives at Kishangarh, is a marginal farmer and owns two acres of land. Randhir Singh and Raghbir Singh, grandsons of Kapura, had gone too. They hail from another Mansa village. Bhola said, “We contributed to the struggle against farm laws like our grandfather did in Muzara lehar.”

Raghbir said, “Government should study our past, our history. We never gave in even during British rule.”

Former CPI MLA Hardev Singh Arshi too had gone to Tikri border to speak about the history of Muzara lehar. He said a memorial gate has been made at the entrance of Kishangarh village to remember this village’s contribution to the movement.

At many places like Sangrur, Barnala, Jagraon and Rampura, meetings were organised to remember the contribution of farmers in Muzara lehar and protest against the new FCI guidelines.