Ravi Shankar Prasad on triple talaq bill: ‘Should I leave them (Muslim women) crying… on footpath’

Targeting the Congress, Ravi Shankar Prasad said it was standing where it stood in 1986, when the Rajiv Gandhi government passed a Bill overturning the Supreme Court verdict in the Shah Bano case. 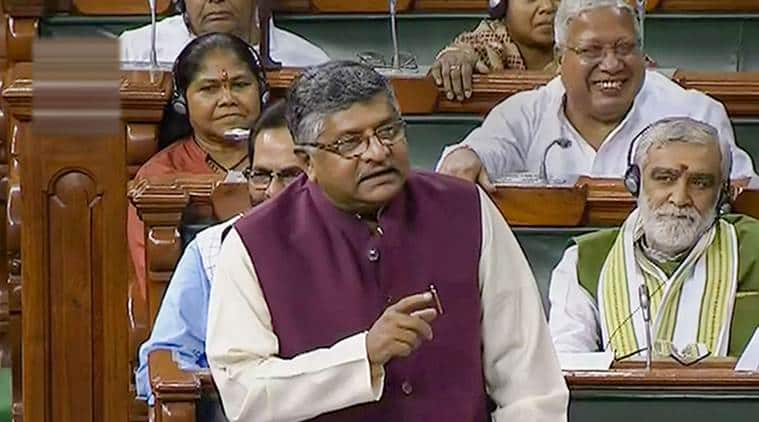 DEFENDING THE instant triple talaq Bill, Law Minister Ravi Shankar Prasad said the government cannot leave hapless Muslim women “crying and sobbing on the footpaths”. Targeting the Congress, he said it was standing where it stood in 1986, when the Rajiv Gandhi government passed a Bill overturning the Supreme Court verdict in the Shah Bano case.

Replying to the discussion on the Bill, Prasad said the country has matured. “Let us understand the changing profile of India, that the people are willing to support a positive initiative for change if the initiative is fair,” he said. Justifying the three-year jail term for offenders, he argued that the provisions for imprisonment were there in laws prohibiting dowry and multiple marriages by Hindu men, passed by Congress governments in the past.

“Why no religion-centric issues are raised when wholesale amendments for right reasons were sought to be done in the Hindu Marriage Act, when the marriage was sought to be made void in the absence of subsistence of the marriage. Not only void simply, but even punishment for seven years? That time, nobody said how would the family be run. On the Dowry Prohibition Act, no one raised the issue that when the husband goes to jail, how he will feed his wife or children,” said Prasad.

“No questions were asked. When Section 498A came about, three years’ punishment and the offence made non-bailable, not a question was raised on this,” he said. Section 498A in the Indian Penal Code is related to a woman being subjected to cruelty by her husband or his relative. He said all these laws were passed by Congress governments which, however, succumbed in the Shah Bano case in 1986.

“The Congress is standing where it stood in 1986… From Shah Bano to Shayara Bano… you are standing where you were… irrespective of whether you have been reduced to 44 or 52. I don’t know what will happen in the future,” he said.

Prasad told Leader of Opposition Ghulam Nabi Azad that he should introspect why the Congress, which got 400-plus seats in 1984, could never get majority on its own in the Lok Sabha elections since then. The minister said he could not leave women who have been divorced by triple talaq via WhatsApp or other such means in the lurch. “Should I leave them crying and sobbing on the footpaths,” he said.

The Law Minister said the BJP may get fewer votes from the Muslim community, but it considers them very much a part of the country and works on the principle of ‘sabka saath, sabka vikas, sabka vishwas’. Prasad said the Bill should not be seen through a political prism as it is a matter of humanity, woman empowerment and gender equality.

Read | Triple talaq bill: How Modi 2.0 felled Opp where it had upper hand

He said that despite the Supreme Court judgment setting aside the practice of instant triple talaq, many cases had come to light. “Should we tell the women of this country that there is a judgment but we are not acting on it? That is why we have brought this Bill. Because the law is a deterrence. There were some misgivings… We have kept provisions for bail, compromise and subsistence allowance,” Prasad said.

It is a matter of gender justice, gender dignity and gender equality, he said.