Ramnath Goenka Awards highlights: Journalism should be without fear and favour, says President

“In the din of the ‘breaking news’ syndrome that has consumed the media now, this fundamental principle of restraint and responsibility has been undermined substantially. Fake news has emerged a new menace, whose purveyors proclaim themselves as journalists and taint this noble profession,” President Kovind said.

“It is a difficult challenge to sustain good journalism and also remain profitable. A section of the media has then taken recourse to entertainment in the name of news. Stories exposing great social and economic inequalities are ignored, and their place is taken by trivia,” Kovind further said.

From stories told from jungles deep inside Bastar that often get lost in the State vs Maoists binary to those that tracked rising instances of sexual assault on minors; from some of the biggest newsbreaks of the year to investigations that highlighted gaps between claims and numbers — these are some of the works from 2018 that were rewarded.

Raj Kamal Jha, Chief Editor of The Indian Express, spoke on the recent controversy over Pakistan poet Faiz Ahmed Faiz’s poem Hum Dekhenge. “In the recent Tu tu main main main over Faiz’s Hum Dekhenge on TV, a telling line slipped away – the one in which he links main and tum,” he said. Here is the video of his address:

President Ram Nath Kovind, who was the chief guest at the Ramnath Goenka Excellence in Journalism Awards held in New Delhi on Monday, said journalism needs to reclaim its values of honesty and fairness if it wanted to stay relevant. He also touched upon the menace of fake news and various other topics. Here is the video of his speech:

RNG Awards: Journalism has to retain its sense of mission, says President

"If journalism has to remain relevant, it has to retain its sense of mission, it has to reclaim its values of honesty and fairness. It has to, 24 by 7, reinforce its compact with citizens: that it will not bend, that it will always fight for truth no matter what the consequence, and that it will remain committed to finding the truth without fear or favour," says President Ram Nath Kovind.

"Ponder for a moment as to what Goenka-ji would have done, had he encountered a crisis of credibility on account of paid news or fake news. He would never have allowed the situation to go adrift and initiated measures for course correction for the whole media fraternity. There is no doubt that journalism has been passing through a critical phase," says President Ram Nath Kovind.

"Journalists tend to wear many hats in the line of their duty. These days, they often assume the role of an investigator, a prosecutor and a judge – all rolled into one. It requires a great deal of inner strength and incredible passion for journalists to play so many roles at a time to arrive at truth. Their versatility is praiseworthy. But that prompts me to ask if such a sweeping exercise of power is accompanied by genuine accountability?" says President Ram Nath Kovind.

RNG Awards: Technology has given rise to new breed of journalism, says President

"Technology has given rise to a new breed of journalism which stands in contrast to traditional journalism. This development has revived the old debates about the status of facts and opinions, about credibility and authenticity. What is desirable is objectivity, which allows journalists to be open to facts, and present all sides of a picture. Fidelity to facts, digging for truth and keeping one’s lens clean and sharp is imperative," says President Ram Nath Kovind.

"In the din of the 'breaking news' syndrome that has consumed the media now, this fundamental principle of restraint and responsibility has been undermined substantially. Fake news has emerged a new menace, whose purveyors proclaim themselves as journalists and taint this noble profession," says President Ram Nath Kovind.

RNG Awards: Journalism should be without fear and favour, says President

"A journalism without fear or favour; its fundamental commitment to truth above all else. When he suspended the publication of the paper during the Quit India movement, his editorial spoke of 'the heartstrings, not the purse-strings'. Over the decades, the Indian Express group has truly evolved itself into an institution that encompasses the best values and traditions of journalism. It has cultivated a culture of irreverence towards authority and sought to practice journalism by speaking truth to power," says President Ram Nath Kovind.

I share his dream of a strong and prosperous India, says President

"It is indeed an elevating experience for a humble Ram Nath to participate in an event named after the redoubtable Ramnath whose stories of fight against oppression and persistence for truth are stuff of legend. But what I do – and all of us must – share with Goenka-ji is his passionate nationalism. I ardently share his dream of a strong and prosperous India," says President Ram Nath Kovind.

"When the Group Chairman, Viveck Goenka, met me to extend the invitation, on a lighter note, he reminded me of the fact that I share  my first name with Ramnath Goenka-ji. I said, yes, it is a pleasant coincidence in which, I am sure you all would agree, I have no role to  play," says President Ram Nath Kovind.

President Ram Nath Kovind begins his address at Ramnath Goenka Awards. "These awards honour those journalists from print, broadcast and digital media who have maintained the highest standards of their profession and, despite immense challenges, produced work that sustains public trust in the media and impacts the lives of people," says Kovind.

President Ram Nath Kovind is now presenting the Ramnath Goenka Awards. In the photojournalism category, the winner is: C Suresh Kumar, The Times of India (Print/Digital)

Viveck Goenka, chairman of the Indian Express Group, says good and excellent journalistic work needs to be nurtured. "President Kovind's presence will enrich our mission and encourage the winners of tomorrow," says Goenka.

RNG Awards: Learning is at the heart of good journalism, says Viveck Goenka

Here are the members of the RNG Awards jury

This time, the RNG Awards have categories covering critical areas in print, digital and electronic media, including business and economics, political reportage, civic journalism, environment, science and technology, journalism in conflict areas, and regional-language reporting. The Awards have prize money of Rs 1 lakh in each category.

President Ram Nath Kovind has arrived at the RNG Awards event. The President will begin his address soon.

Ramnath Goenka Excellence in Journalism Awards was instituted in 2006

Here is a quick background to the history of the prestigious Ramnath Goenka Excellence in Journalism Awards. The Awards, instituted in 2006, honour journalists from print, broadcast and digital media, who have shown extraordinary strength of character and integrity while reporting news accurately under dangerous or difficult circumstances. Blending rigorous research and deep insights, the stories take you to places often left out of the headlines, and point to issues that must be heeded.

Welcome to our live blog. The Ramnath Goenka Excellence in Journalism Awards event will begin at 6 pm. President Ram Nath Kovind will give away the awards. Administered by the Ramnath Goenka Memorial Foundation, the Awards have become the most important event in the media calendar. 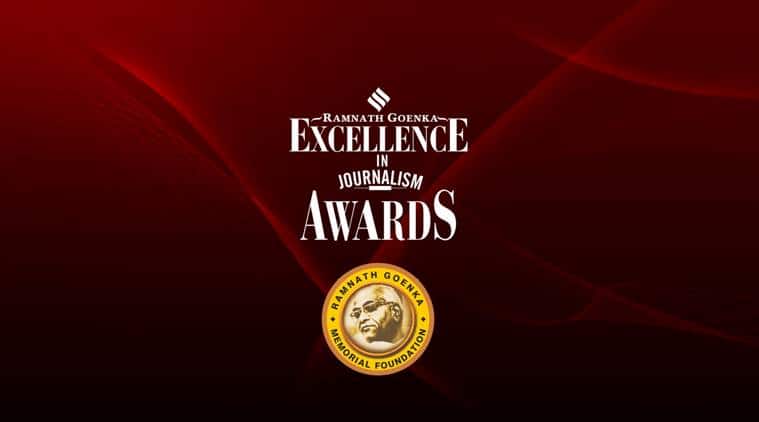 Ramnath Goenka Awards highlights: Administered by the Ramnath Goenka Memorial Foundation, the Awards have become the most important event in the media calendar.

In times of churn where even the news space is polarised, and where it’s difficult to tell fact from fake, the Ramnath Goenka Excellence in Journalism Awards celebrate journalism that is defined by fairness and accuracy and is not afraid to speak the truth.