Chairman M Venkaiah Naidu also rejected the no-confidence motion against his deputy, Harivansh, on the grounds that proper procedure was not followed. Proceedings in Rajya Sabha on Monday were disrupted several times, before it was finally adjourned for the day, amid strong protests over the suspension of eight opposition MPs for their “unruly behaviour” during the passage of the farm bills yesterday.

Rajya Sabha Chairman M Venkaiah Naidu also rejected the no-confidence motion against his deputy, Harivansh, on the grounds that proper procedure was not followed and that a 14-day notice was required to do the same. Opposition leaders stage a protest over suspension of 8 MPs for causing ruckus in the Upper House yesterday, during the ongoing Monsoon Session, on Monday. (RSTV/PTI photo)

Strongly condemning Sunday’s incident, Naidu told the House: “I was deeply pained by what happened yesterday. All social distancing and Covid protocols were violated. Whatever happened, defied logic. It was a bad day for the Rajya Sabha. The deputy chairman was physically threatened. I was worried for his physical well-being.”

“You have no right to obstruct the chair and the business in the House. It tarnishes the image of the House. Is it a Parliamentary standard? I suggest the members to do some introspection. If the marshals were not called on time, what would have happened?” he added. 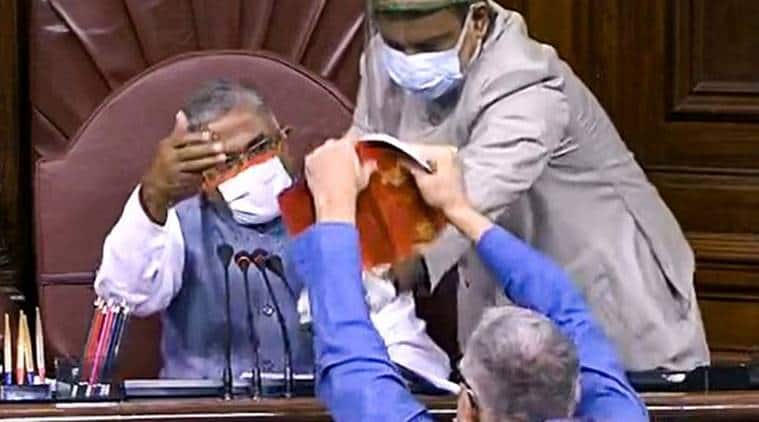 Following this, Parliamentary Affairs Ministers read out a motion seeking suspension of eight members for the remainder of the session. Naidu put the motion to vote and it was carried by voice vote.

As the opposition members gathered at the well of the House, Naidu, Harivansh and later Bhubhaneshwar Kalita, adjourned the House as the presiding officers.

The Chair assured the protesting members that the Leader of Opposition, Ghulam Nabi Azad, will be allowed to speak only once the suspended members leave and order resumed in the House. Congress MPs in the Rajya Sabha during the ongoing Monsoon Session of Parliament. (RSTV/PTI photo)

The opposition demanded that the resolution to suspend the eight members be put through division voting process, and not through voice vote. The presiding officers, however, said they had missed the window for demanding division voting, in which the members can vote through either the electronic voting system, or through voting slips, and each members vote is known.

The House on Sunday witnessed tumultuous scenes during the passage of the contentious farm bills  — The Farmers Produce Trade and Commerce (Promotion and Facilitation) Bill, 2020; and The Farmers (Empowerment and Protection) Agreement on Price Assurance and Farm Services Bill, 2020 —  as members from Opposition parties snatched and threw papers from the table and even broke the chairman’s mic.

A top view of the Upper House during the session on Monday. (RSTV/PTI photo)

The Bills, which seek to replace the two ordinances promulgated on June 5 this year and which were already cleared by the Lok Sabha, were passed by voice vote in the Upper House.

While the opposition has been protesting and demanding that the Bills be sent to a Select Committee, the ruckus erupted after Deputy Chairman Harivansh sought the members’ nod to extend the time of sitting of the House beyond 1 pm till the passage of the Bills. The opposition members demanded that the House be adjourned as per the scheduled time.

However, the Deputy Chairman continued with the proceedings of the House and asked Agriculture Minister Narendra Singh Tomar to continue his response to the debate on the Bills.

Explained Ideas: Why a sharp economic recovery in 2021 can be misleading