Rajnath Singh said Dineshwar Sharma has been appointed as the representative of the government to initiate dialogue in the insurgency-hit Kashmir. 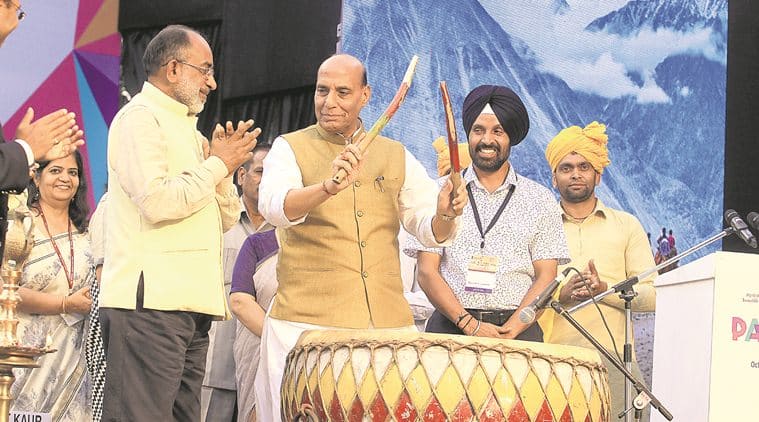 Nine weeks after Prime Minister Narendra Modi reached out to the Valley from the Red Fort saying “Kashmir’s problems can be solved only by embracing its people, not with bullets or abuses”, the Centre Monday named a former Intelligence chief as its special representative to “initiate and carry forward a dialogue with elected representatives, various organisations and concerned individuals in the State of Jammu and Kashmir”.

Asked if Sharma would be talking to separatists and organisations such as the Hurriyat Conference as well, Singh said: “Sharma will have full freedom to engage in talks with anyone he likes. The youth of Kashmir will be a special focus.” Dineshwar Sharma’s appointment may take some pressure off CM, open up political space

An official statement later said Sharma will initiate “sustained interaction and dialogue to understand the legitimate aspirations of the wide cross-sections of society, particularly the youth in Jammu and Kashmir and communicate them to the State Government and the Centre”.

The announcement on initiating a dialogue in J&K comes at a time when at least ten separatist leaders have been raided and arrested by the National Investigation Agency and Enforcement Directorate for their alleged involvement in suspicious transactions. Those arrested include Altaf Shah alias Fantoosh, son-in-law of Hurriyat hardliner Syed Ali Shah Geelani, and businessman Zahoor Watali.

In his Independence Day address from the ramparts of the Red Fort, Modi had said: “Na goli se, na gaali se, Kashmir ki samasya suljhegi gale lagaane se (Kashmir’s problems can be solved only by embracing its people, not with bullets or abuses)”.

“The Prime Minister’s remarks show the intention of the government on Kashmir. It shows the conviction and consistency of the government. We have decided to start a sustained dialogue,” Rajnath Singh told reporters. He had also visited J&K from September 9-12 and met a large number of delegations. Dineshwar Sharma appointment an eyewash, says former interlocutor

Dineshwar Sharma is a retired IPS officer from the 1979 batch of the Kerala cadre. He will enjoy the rank of a Cabinet Secretary in his new assignment. In August this year, he was engaged as the Centre’s interlocutor for talks with Kuki organisations and the Manipur government.

The Valley has been in turmoil since July 2016 when the killing of Hizbul Mujahideen commander Burhan Wani triggered street protests, prompting a crackdown by security forces. This year alone, over 160 militants have been killed in the Valley. The Opposition has been urging the government to go for a political dialogue.

Local protests, including those by school-going children, have dominated the Kashmir unrest narrative. The Army too courted controversy in April this year after an officer tied a Kashmiri man to his jeep, ostensibly to use him as a human shield against stone-throwing protesters.

National anthem in movie halls: SC asks why do people have to wear patriotism on sleeve