Speaking at the commissioning ceremony of INS Visakhapatnam, a P15B stealth guided missile destroyer, Rajnath said territorial waters, exclusive economic zones, and the principle of “good order at sea” have been set forth in UNCLOS, which was adopted in 1982. 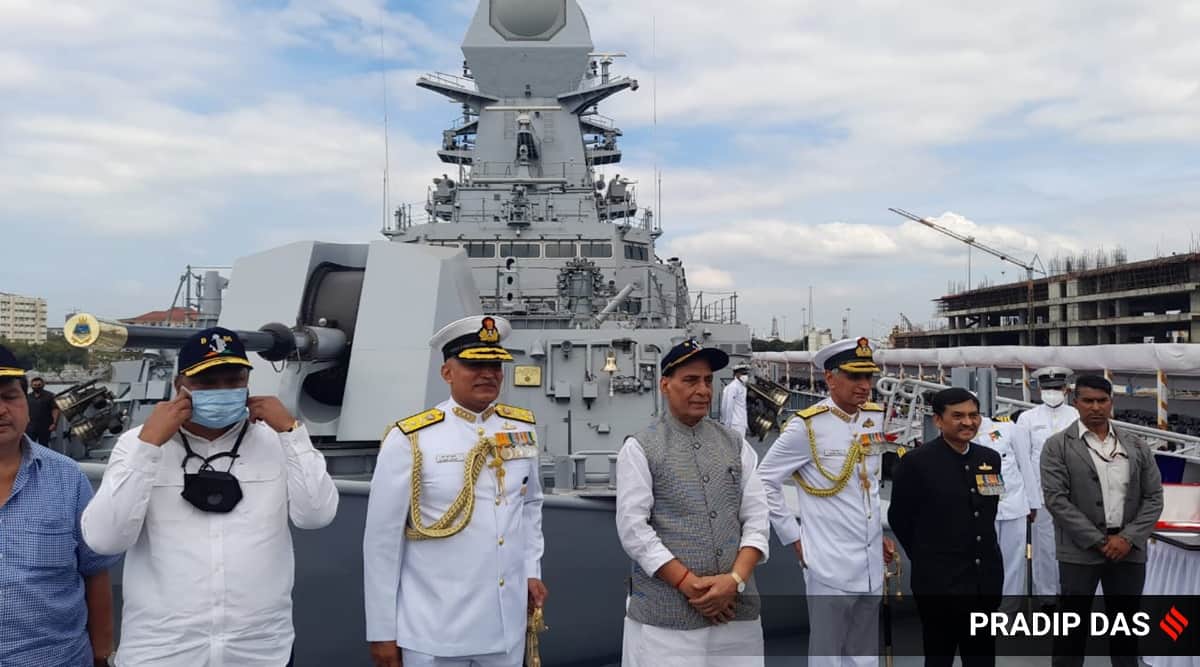 IN AN apparent reference to China, Union Defence Minister Rajnath Singh Sunday said that “some irresponsible nations” are coming up with “new and inappropriate interpretations” of the UN Convention on the Law of the Sea (UNCLOS) due to “hegemonic tendencies”, and that this was creating obstacles to a stable maritime order based on rules.

Speaking at the commissioning ceremony of INS Visakhapatnam, a P15B stealth guided missile destroyer, Rajnath said territorial waters, exclusive economic zones, and the principle of “good order at sea” have been set forth in UNCLOS, which was adopted in 1982.

“Some irresponsible nations, for the sake of their narrow partisan interests, keep on giving new and inappropriate interpretations to these international laws from hegemonic tendencies,” he said.

“The arbitrary interpretations create obstacles in the path of a rule-based maritime order. We envision a rule-based Indo-Pacific, with freedom of navigation, free trade, and universal values, in which the interests of all the participating countries are protected,” he said.

UNCLOS is the legal framework applicable to activities on the oceans, including countering illicit activities at sea. The Defence Minister’s remarks are being seen as a reference to China’s aggressive moves in the South China Sea.

Rajnath also praised the Navy for taking forward Prime Minister Narendra Modi’s vision of SAGAR (Security and Growth for All in the Region), and said India’s interests were directly linked with the Indian Ocean, and the region was crucial for the world economy.

“Challenges such as piracy, terrorism, illegal smuggling of arms and narcotics, human trafficking, illegal fishing, and damage to the environment are equally responsible for affecting the maritime domain. Therefore, the role of the Indian Navy becomes very important in the entire Indo-Pacific region,” he said.

The Defence Minister emphasised on the need to keep the Indo-Pacific region open, safe and secure, and described it as the primary objective of the Indian Navy.

Referring to INS Visakhapatnam as a reminder of India’s maritime power, shipbuilding skills, and history, Rajnath described the state-of-the-art ship, equipped with the latest systems and weapons, as one of the most technologically advanced guided missile destroyers in the world.

He also said that the Navy’s order of 39 out of its 41 warships and submarines from Indian shipyards was a testament to its commitment to Atma Nirbhar Bharat, and that the development of the indigenous aircraft carrier INS Vikrant in Kochi was an important milestone.

Saying that global security, border disputes, and maritime dominance have forced countries to move towards strengthening their military power, Singh called on the public and private sectors to take advantage of the government’s policies and make India an indigenous shipbuilding hub.

He listed a number of reforms undertaken by the government through which the public and private sectors could make a mark in the international market.

According to him, they include: simplification of the licensing process; speeding-up the Acceptance of Necessity (AoN) and Request for Proposal (RFP) processes; setting up defence industrial corridors in UP and Tamil Nadu; indigenous listing of over 200 items; the Defence Acquisition Procedure 2020; and earmarking 64 per cent of modernisation funds under the capital acquisition budget for 2021-22 for domestic procurement.