The Rajasthan High Court on Thursday accepted the amended plea filed by Sachin Pilot camp challenging the disqualification of MLAs by Rajasthan speaker. It will now  be heard by two-judge bench on Friday at 1 PM.

Earlier today, Pilot sought some time to amend their plea and the court had deferred the hearing. Counsel Harish Salve had said that dissident MLAs want to challenge anti-defection law enshrined in Tenth Schedule of Constitution. The 19 MLAs were sent notices Tuesday by the Speaker after the Congress complained that the MLAs had defied a party whip to attend two Congress Legislature Party meetings

After Ashok Gehlot’s stinging remarks on Sachin Pilot, sources said, Congress spokesperson Randeep Surjewala, who is part of the central team sent by the Congress to Jaipur to handle the crisis, had a meeting with the chief minister. It was conveyed to him that Rahul Gandhi wants to keep the doors open for Pilot. Sources said Gehlot told Surjewala he was not against that but Pilot would have to “leave the BJP camp”. Sources in Delhi said both Rahul and Priyanka Gandhi Vadra are keen to accommodate Pilot, and that Ahmed Patel was talking to him. Pilot, who has been removed as deputy CM and state party president, said he is not joining the BJP.

Even as the political crisis in the state deepens, the Rajasthan BJP unit is in “wait and watch” mode. Party leaders maintained that the BJP, as the main Opposition in Rajasthan, will take “every action to see that the Gehlot government fails to prove (its) majority” in the Assembly.

The Rajasthan High Court will hear the  amended plea filed by Sachin Pilot camp challenging the disqualification of MLAs by Rajasthan speaker on Friday at 1 PM.

BJP leader Hanuman Beniwal in a tweet said that Former Mahdhya Pradesh Chief Minister Vasundhara Raje is in support of Askhok Gehlot and that she has been asking the people of Rajasthan to support Gehlot.

The hearing on plea challenging the disqualification of MLAs by the Rajasthan speaker resumes. The plea was filed by Sachil Pilot camp. He is being representated by senior advocate Harish Salve

BTP places five demands concerning tribal development, says not in support of any party as of now

In a twisht, the Bhartiya Tribal Party (BTP) who were in support of Gehlot earlier have now placed a list of five demands, mainly concerning tribal development. The party president has asked the MLAs to not support either Gehlot, Pilot, or BJP, as of now.

The Rajasthan High court has granted time to Pilot camp to file fresh petition and said the matter will be heard by Division Bench. Harish Salve, representing Pilot said that that the petitioners will challenge anti-defection law enshrined in Tenth Schedule of Constitution.

Sachin Pilot and 18 other Congress MLAs who have approached the Rajasthan High Court over disqualification notice from Assembly Speaker sought time to amend its petition.

Notice for disqualification of MLAs by speaker 'unconsitutional': Harish Salve

Sachin Pilot and camp's case is in court. Hearing begins

Pilot camp moves Rajasthan High Court: Who are the lawyers?

Prithviraj Meena, an MLA supporting Sachin Pilot, has moved Rajasthan High Court challenging state Assembly Speaker's disqualification notice to them. The matter will be heard at 3 pm today. Harish Salve and Mukul Rohatgi to represent them.

Sources in the Congress also claimed that the rebellion led by Sachin Pilot had been brewing for long and that the notice issued to him by the Special Operations Group of the Rajasthan Police — in a probe into an alleged bid to topple the state government — may have forced him to play his hand immediately, without waiting for the required numbers to topple the government.

Allegations of the BJP being involved in an alleged conspiracy to topple the government had come up during the Rajya Sabha elections last month, when Gehlot had moved swiftly to take party MLAs to a resort ahead of voting. After the Congress went on to comfortably win the two Rajya Sabha seats from the state, Gehlot was accused by many of crying wolf, including Pilot, who said, “I had said it before the elections, which turned out to be right. It means that whatever was said, be it by anyone, was all baseless.”

In a fix after Sachin Pilot’s no to joining BJP, saffron party says game ‘not concluded yet’

The fight for the embattled Ashok Gehlot government may not be over still, with Union minister and senior BJP leader from the state Gajendra Singh Shekhawat indicating that it has “not concluded yet”. While many in the BJP had felt that Pilot would be an asset to the party if he leaves the Congress with a bunch of legislators, and that the BJP could then initiate action to topple the Gehlot government, the former PCC chief’s stand seems to have disappointed them.

According to BJP leaders, the party has discussed several plans in case Pilot and Rajasthan Congress MLAs backing him do not vote for the Gehlot government. “But we need to get a final picture on what Pilot wants, and what (kind of support) he has,” a party leader said. “We are waiting and watching, but the BJP will help those who are leaving the Congress camp,” a senior BJP leader said. “As an opposition party, we will have to see that the Ashok Gehlot government is defeated (in a floor test).” 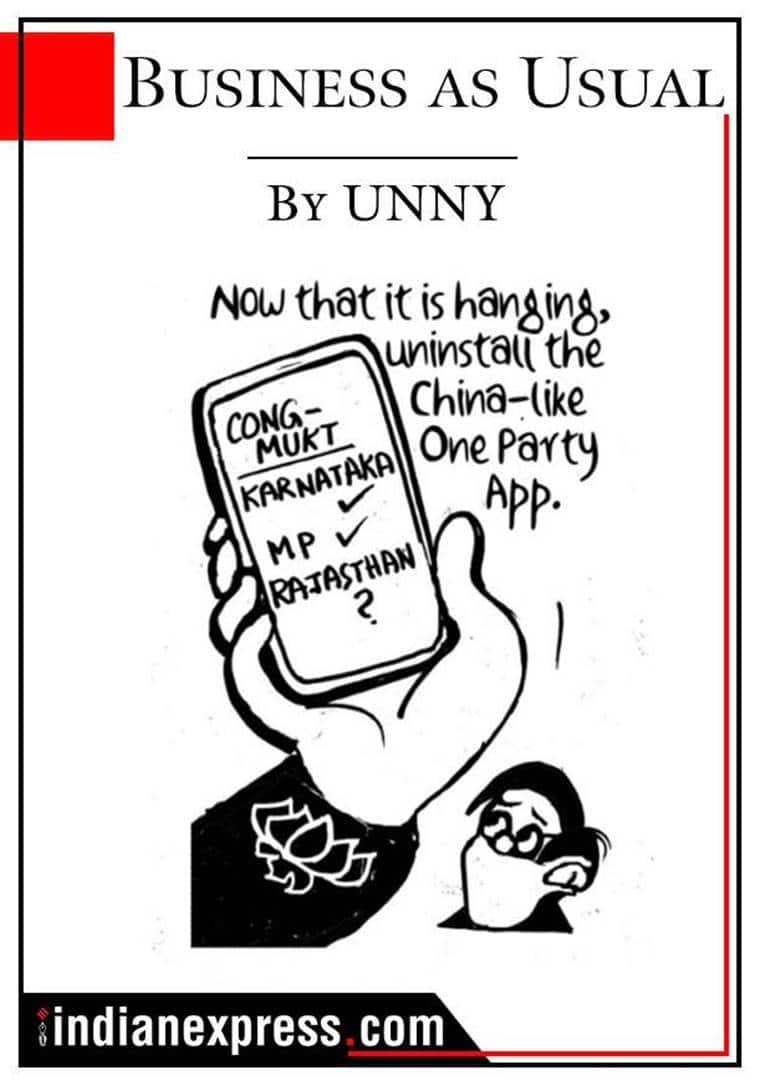 ‘What about ghar wapsi?': Kapil Sibal's jibe at Sachin Pilot

A day after Sachin Pilot ruled out joining BJP and accused "few Rajasthan leaders" of maligning his image by spreading the rumour, Congress leader Kapil Sibal on Thursday hit out at him saying it seems that the MLAs in Haryana's Manesar are on vacation and asked what about 'ghar wapsi' (coming back). “False rumours spread to malign. Pilot: “I am not joining BJP”. I guess then legislators at a hotel in Manesar is merely a vacation in Haryana’s comfort zone under BJP’s watchful eye. What about “ghar wapsi”?” Sibal tweeted.

On Wednesday, Congress spokesperson Randeep Singh Surjewala said that Pilot was welcome back provided he left “the Haryana BJP government’s hospitality (MLAs backing Pilot are staying in hotels in Haryana)”.

Rajasthan: Ex-Congress, 10 of 13 ‘kingmaker’ Independents likely to back CM Gehlot

Without Pilot and the other 18 MLAs, the Congress’s strength in the 200-member House will go down from 107 to 88 – or 89 with support of ally RLD. And this is where support of the Independents becomes crucial in order to reach the majority mark of 101.

Ten of these Independents, already ‘associated members’ of the Congress, are known to be in the camp of Chief Minister Ashok Gehlot. Most of them, originally from Congress, contested the 2018 Assembly polls as Independents after being denied a party ticket given the power struggle between Pilot and Gehlot camps, and as such are mostly Gehlot loyalists. In the present crisis, they have issued statements in support of the CM.

Senior Congress leader Rahul Gandhi’s reported remarks at an NSUI meeting on Wednesday sent the party into a tizzy. Speaking to office-bearers of the party’s students wing, Rahul is said to have observed that whosoever wants to leave the party will leave and they should not be unduly worried about it. He reportedly added that when a big leader leaves the party, it will open doors for youths like them. The Congress immediately denied he made any such remark, as it was being read in the context of speculation that Sachin Pilot could leave the party. Read the snippet from Delhi Confidential

After Ashok Gehlot's stinging remarks on Sachin Pilot, sources said, Surjewala, who is part of the central team sent by the Congress to Jaipur to handle the crisis, had a meeting with the chief minister. It was conveyed to him that Rahul Gandhi wants to keep the doors open for Pilot. Sources said Gehlot told Surjewala he was not against that but Pilot would have to “leave the BJP camp”. Sources in Delhi said both Rahul and Priyanka Gandhi Vadra are keen to accommodate Pilot, and that Ahmed Patel was talking to him.

Rajasthan crisis: Ashok Gehlot jeers at Sachin Pilot as Congress asks him to ‘return to family’

Even as the Congress reiterated that the party has not closed its doors on rebel leader Sachin Pilot, Rajasthan Chief Minister Ashok Gehlot Wednesday took a jibe at his former deputy, saying that “speaking good English or being handsome is not everything”. Gehlot also accused Pilot, who was the former state Congress president, of being involved in horse-trading with the BJP to topple his government.

“Speaking good English, giving good bytes and being handsome is not everything. What do you have in your heart, what commitment do you have, this all is seen,” Gehlot said, without mentioning Pilot by his name.

On Tuesday, the Congress stripped Pilot of both his posts—as deputy chief minister and state PCC chief—three days after his showdown with CM Gehlot. The party also cracked the whip on Pilot’s loyalists: Vishvendra Singh and Ramesh Meena were removed from the state cabinet, and the state presidents of the Youth Congress and Seva Dal were replaced. The decision was announced after Pilot and his MLAs skipped the Congress Legislature Party (CLP) meet in the morning — the second in two days — at a hotel on the outskirts of Jaipur, where the Gehlot camp is keeping Congress and other supporting MLAs. The meetings concluded with CM Gehlot establishing his majority, and with a recommendation to take action against the 19 MLAs. Read full report here. Rahul Gandhi has lost his arms in Scindia and Pilot: Guj Deputy CM

Congress leader Rahul Gandhi has lost both his arms in Jyotiraditya Scindia and Sachin Pilot, Gujarat Deputy Chief Minister Nitin Patel said on Wednesday and added that a weaker Congress is good for the BJP, news agency PTI reported.

"We all saw what had happened in Madhya Pradesh. Now, it's happening again in Rajasthan. There seems to be some fault in the functioning of the Congress leadership," Patel said.

"These two young leaders (Pilot and Scindia) were like right and left hands of Rahul Gandhi. Now, he has lost both his arms," he added.

Three days after the showdown between Chief Minister Ashok Gehlot and his deputy Sachin Pilot triggered a crisis in Rajasthan, the Congress moved swiftly on Tuesday, removing Pilot from both his posts — as deputy chief minister and state PCC chief.

The party also cracked the whip on Pilot’s loyalists: Vishvendra Singh and Ramesh Meena were removed from the state cabinet, and the state presidents of the Youth Congress and Seva Dal were replaced. The decision was announced after Pilot and his MLAs skipped the Congress Legislature Party (CLP) meet in the morning — the second in two days — at a hotel on the outskirts of Jaipur, where the Gehlot camp is keeping Congress and other supporting MLAs.

Soon after he was sacked, Pilot tweeted: “Satya ko pareshan kiya ja sakta hai, parajit nahi (Truth can be harassed, not defeated).” In another tweet at night, he said: “My heartfelt thanks and gratitude to all those who have come out in my support today.”

Later in the day, Gehlot chaired a cabinet meeting at his residence. Sources said he discussed cabinet expansion and allotment of portfolios – nine departments are now without a minister.

Late in the night, Rajasthan Congress in-charge Avinash Pande dismissed the entire state party unit, and said all appointments would be made afresh. He also issued a gag order on party leaders, barring them from communicating with the media without permission from the new PCC chief.