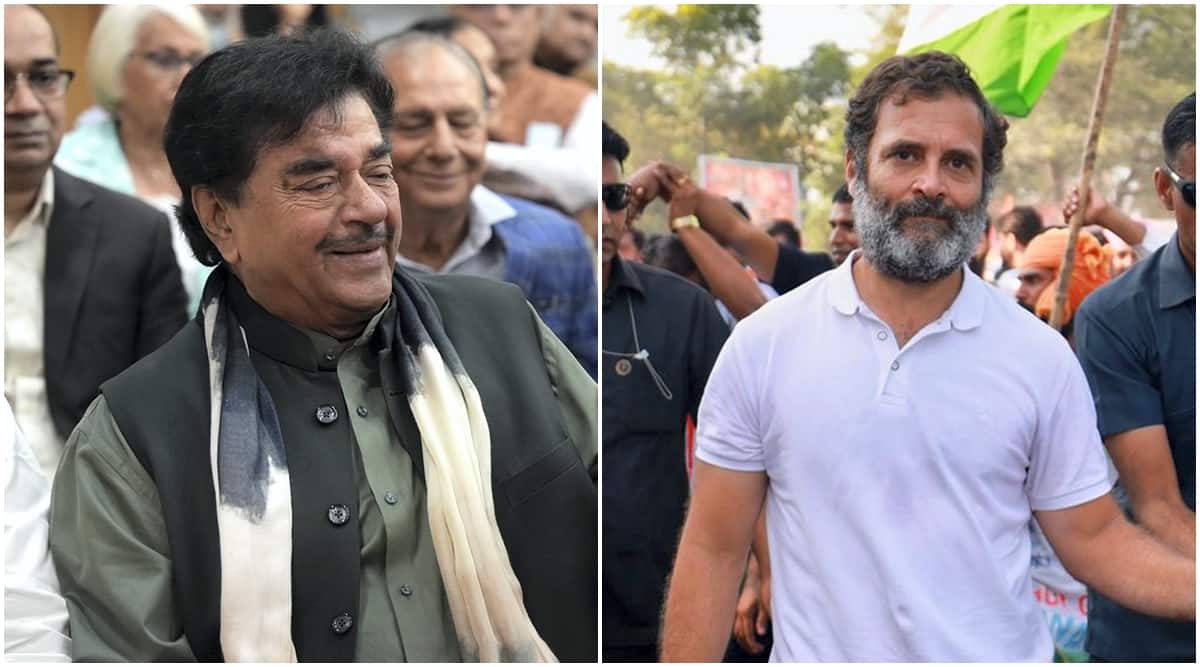 In an interview to PTI, Sinha said Gandhi’s 3,570-km-long march that began in Kanyakumari in Tamil Nadu will help the Congress double its tally in the 2024 Lok Sabha elections. The Congress won 52 seats in 2019 elections.

“Bharat Jodo Yatra is getting a very good response. Rahul Gandhi’s charisma has started working, and he is getting an excellent response from the people. I feel that Gandhi’s yatra will help double the tally of the Congress in Parliament in the next Lok Sabha polls,” he said.

“This is a ‘yatra’ in a true sense as Gandhi is walking unlike ‘Rath yatras’ by BJP leaders. Lakhs of people are coming out in his support. He has proved his leadership qualities. People have accepted him as a leader. And, those who made fun of him as ‘Pappu’ and didn’t take him seriously have been proved wrong,” he added.

Sinha, a former BJP MP, briefly joined the Congress in 2019 after differences with his former party. The popular actor of the 1970s and 1980s joined the TMC earlier this year and successfully fought the by-election from Asansol, an industrial town in West Bengal with a substantial Bihari population.

“BJP leaders are making fun of Gandhi, but let them also conduct a similar yatra on foot if they have the fire in their belly. The magic spell of Rahul Gandhi will work in the next elections, I feel and I want it to happen,” Sinha said.

Speaking on the Gujarat elections, the TMC leader said Delhi Chief Minister Arvind Kejriwal would either emerge as the “kingmaker or the king” himself.

“In Gujarat, Kejriwal will either emerge as the king or the kingmaker. There is a churning in the saffron camp in Gujarat. The BJP cannot milk Hindutva or the Ram Mandir issue every time. Kejriwal has played a masterstroke through his demand of photos of Goddess Laxmi and Lord Ganesh on currency notes,” he said.

Last week, Kejriwal appealed to Prime Minister Narendra Modi to print images of Lord Ganesh and Goddess Lakshmi on currency notes for the progress of the country.

“Kejriwal has paid the BJP back with the same coin. The BJP used to act as if they were the master of the ‘Hindutva school of politics’ but Kejriwal is now the headmaster of that school. The BJP can neither swallow it nor discard it,” Sinha said.

Claiming that West Bengal Chief Minister Mamata Banerjee will be a “game-changer” in the 2024 Lok Sabha election, Sinha hoped that the relation between the TMC and the Congress would improve.

“There is no last word in politics. Today, the relations are not good doesn’t mean it won’t improve tomorrow. I personally feel that if major opposition parties come together, the political situation of the country will be completely different,” he said.

On the face of the opposition for the 2024 elections, Sinha said that the people of the country will choose the right leader.

“This question that who will be next (prime minister) comes up in every election. Once you reach the top politically, it will be decided based on numbers and the mandate. The country never stops, governments keep changing, and new leadership comes up,” he said.

Sinha, a minister in the Atal Bihari Vajpayee’s NDA government, asserted that the anti-BJP parties are gaining momentum in the states — whether it is Bihar, West Bengal, Tamil Nadu or Karnataka.

Sinha also targetted the BJP for the “missing” posters that surfaced in Asansol, his constituency, last week.

“Those who are yet to digest the defeat in the bypoll are behind this. I was in my constituency during Durga Puja, and was here till last week. I am spending Chhaath here in Asansol. I have been regularly visiting Asansol and the people of my constituency will vouch for it,” he said.