On Myanmar, Jaishankar pointed to the challenge of insurgency along the Indo-Myanmar border, and recalled the recent incident in which a Colonel and his family that included a child were killed in an ambush by militants. 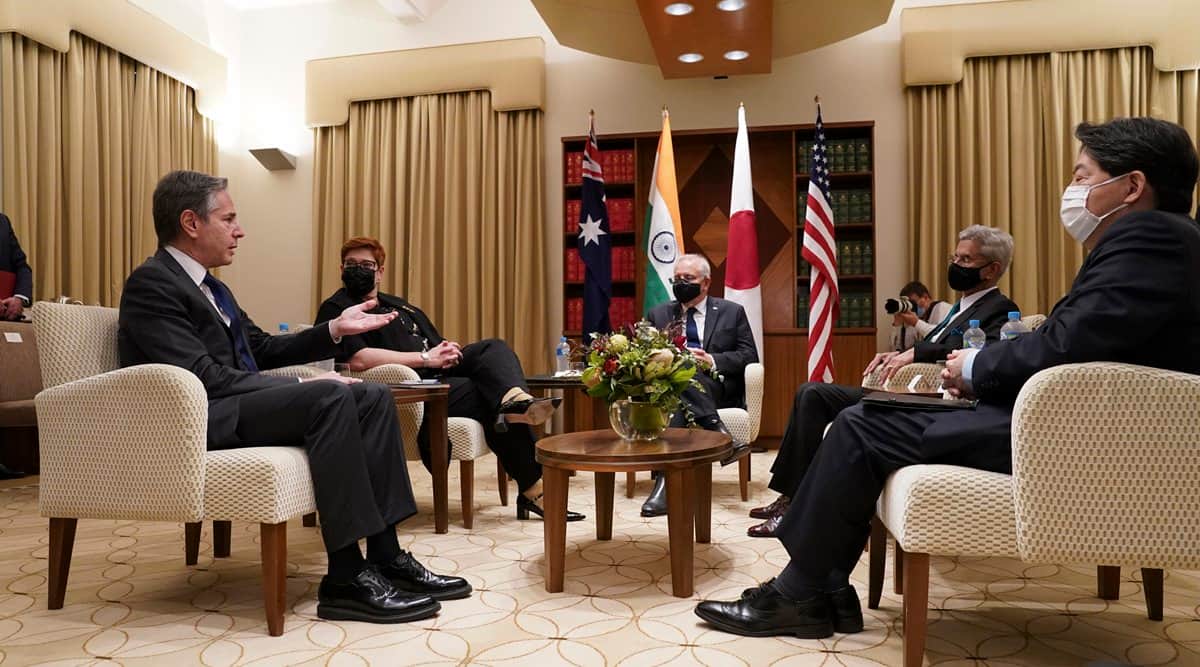 External Affairs Minister S Jaishankar joined counterparts from US, Japan and host Australia at the meeting of Quad Foreign Ministers in Melbourne Friday to send a clear signal to Beijing, underlining their pursuit of a “shared vision” to uphold “a rules-based international order, free from coercion — one based on respect for territorial integrity and sovereignty”.

But after the meeting, Jaishankar took a slightly nuanced position in public than the three other Foreign Ministers — US Secretary of State Antony J Blinken, Australian Foreign Minister Marise Payne and Japanese Foreign Minister Yoshimasa Hayashi — on at least two important issues: the Russia-Ukraine row and the Myanmar issue.

Check Out Express Premium
Click here for more
Explained | How was the Quad formed, and what are its objectives?

On Myanmar, Jaishankar pointed to the challenge of insurgency along the Indo-Myanmar border, and recalled the recent incident in which a Colonel and his family that included a child were killed in an ambush by militants. He also stressed that India is against “national sanctions”. The US has imposed sanctions on a number of leaders of the Myanmar junta.

He maintained complete diplomatic silence on the Russian threat to invade Ukraine, while Blinken said there are “troubling signs of Russian escalation, including new forces arriving at the Ukrainian border” and that they are “in a window when an invasion could begin at any time, and that includes during the (Winter) Olympics in Beijing”.

A long and productive day in Melbourne. Just finished the 4th Quad Foreign Ministers’ Meeting. Impressed by the progress we have made.

Japan’s Hayashi said Ukraine was discussed during the Quad meeting and “sovereignty and territorial integrity” have consistently been supported by Japan.

Asked to comment on the recent meeting between Russian President Vladimir Putin and Chinese President Xi Jinping, Jaishankar said: “I would just add that as my colleagues have observed, we are for something, not against somebody.” The issue of Ukraine was not part of the Quad Foreign Ministers’ joint statement either.

Myanmar, however, figured in the joint statement: “We remain gravely concerned about the crisis in Myanmar and call for an end to violence, the release of all those arbitrarily detained, including foreigners, and unhindered humanitarian access. We reaffirm our support for ASEAN efforts to seek a solution in Myanmar and call on the military regime to urgently implement ASEAN’s Five-Point Consensus and swiftly return Myanmar to the path of democracy. We encourage the international community to work together to support an end to the violence.”

After the meeting, Blinken said: “I think it is painfully obvious that the developments there are deeply, deeply troubling, and deeply troubling to all of us. We have seen the junta double down on repression, on violence.”

Jaishankar, in his response to questions, said: “I think we all agreed on the importance of the democratic transition which was underway in Myanmar. And clearly, the fact that the country has moved in a different direction is something which troubles all of us. We all, I think, also very strongly back the ASEAN position on Myanmar and their efforts to engage.”

“But we are concerned, India is concerned as an immediate land-border neighbour. We have some very specific concerns on Myanmar which also guide our thinking, concerns about insurgents operating there who some months ago killed a very senior military officer and his family; concerns about Covid and the lack of vaccination on our common border; concerns about a humanitarian situation which is arising from food shortages.”

“So I think those are also concerns which we take into account, and where we are concerned we don’t follow a policy of national sanctions,” he said, making it clear that it doesn’t support US policy on sanctions on Myanmar.

Hayashi confirmed that leaders of the four Quad countries, including Prime Minister Narendra Modi, will be holding a summit in Japan in the first half of this year.

Jaishankar said: “As leading democracies, we pursue our shared vision of upholding a rules-based international order, free from coercion — one based on respect for territorial integrity and sovereignty, rule of law, transparency, freedom of navigation in the international seas and peaceful resolution of disputes.”

The Quad statement also talked about “terrorism and violent extremism” and stated: “We denounce the use of terrorist proxies for cross-border terrorism and urge countries to work together to eliminate terrorist safe havens; disrupt terrorist networks and the infrastructure and financial channels which sustain them; and halt cross-border movement of terrorists. In this context, we call on all countries to ensure that territory under their control is not used to launch terror attacks and to expeditiously bring to justice the perpetrators of such attacks.”

“We reiterate our condemnation of terrorist attacks in India, including 26/11 Mumbai and Pathankot attacks,” it said, adding that they reaffirmed UNSC Resolution 2593 (2021) that “Afghan territory should not be used to threaten or attack any country, shelter or train terrorists, or plan or finance terrorist acts, with such ungoverned spaces being a direct threat to the safety and security of the Indo-Pacific”.

On vaccines, the statement said: “As we enter the third year of the Covid-19 pandemic, Quad partners have collectively provided more than 500 million vaccine doses. Together, we have pledged to donate more than 1.3 billion vaccine doses globally. We are pleased with the Quad Vaccine Partnership’s rapid progress in expanding vaccine production at the Biological E Ltd facility in India, which aims to deliver at least 1 billion vaccines by the end of 2022. We look forward to the delivery of the first batch of Quad-supported vaccines in the first half of this year.”