Dhami sworn in as Uttarakhand CM: ‘My responsibility to take everyone along’

All members of the previous council of ministers led by Tirath Singh Rawat were given place in the new cabinet. 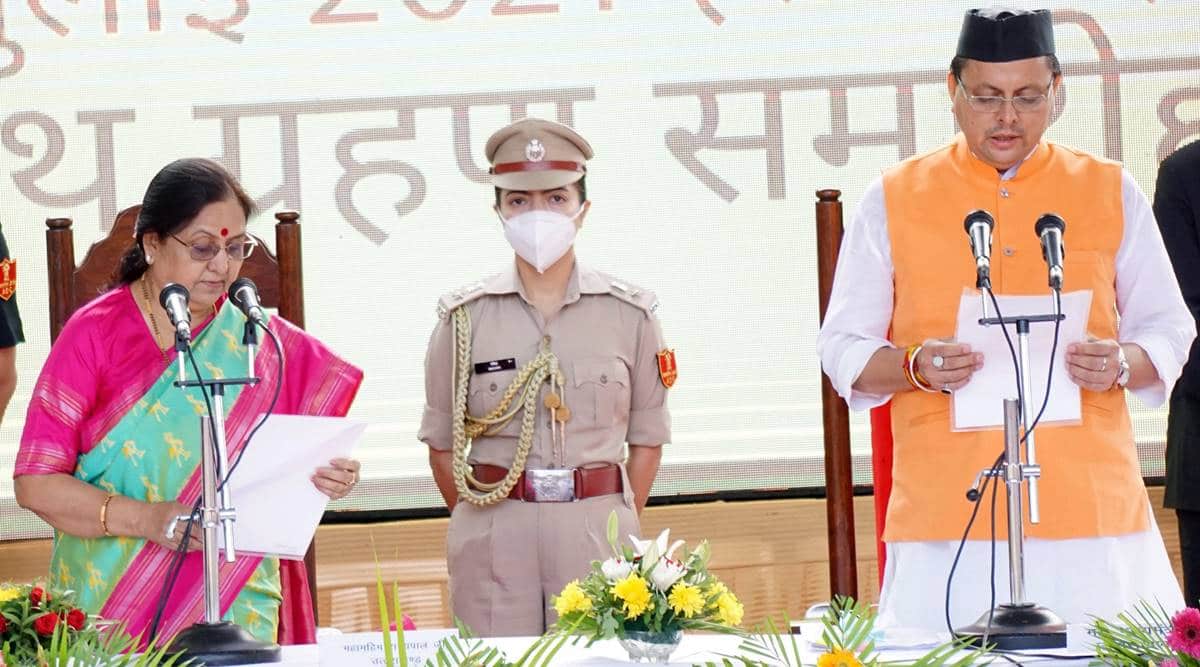 A day after his election as leader of BJP legislature group, Khatima MLA Pushkar Singh Dhami on Sunday was sworn in as 11th Chief Minister of Uttarakhand. All members of the previous council of ministers led by Tirath Singh Rawat were given place in the new cabinet.

Governor Baby Rani Maurya administered the oath to Dhami, 45, and all the ministers at a ceremony in Raj Bhavan. Former CMs Tirath Singh Rawat and Trivendra Singh Rawat, and BJP general secretary in-charge Dushyant Kumar Gautam were also present at the ceremony.

Prime Minister Narendra Modi extended his congratulations to Dhami and the ministers. “Best wishes to this team as they work towards the progress and prosperity of Uttarakhand,” the PM tweeted. BJP president J P Nadda and Home Minister Amit Shah also congratulated Dhami.

After taking oath, Dhami – the third CM of Uttarakhand in four months — said he will meet the expectations of the youth and the party leadership. He said that the Covid-19 pandemic has created a crisis of employment and has affected the Char Dham yatra and those people dependant on tourism. “We will try to bring the situation all that back on track. We will make appointments on vacant positions and will also create employment for youths,” he said.

Ahead of the oath-taking ceremony, top leaders BJP spoke to senior MLAs and ministers after receiving reports that many of them are upset over Dhami’s selection as CM. Sources said some legislators were of the opinion that senior and experienced leaders had been ignored and a two-term MLA had been chosen as CM just months ahead of the Assembly polls.

Sources said a senior minister who took oath on Sunday had earlier not accepted the cabinet berth offered to him as he felt that “seniors should not be ignored”. Sources said that senior party functionaries talked to the disgruntled leaders and convinced them that the party respects the sentiments of each member.

Asked by the media to comment on senior BJP leaders being reportedly upset by his elevation as CM, Dhami said, “No one was annoyed…did you see any one upset here (at the oath-taking ceremony)?”

Asked about his meeting with Maharaj before the ceremony, Dhami said, “I am young in age and all are experienced and my seniors. My party is my mother that has given me an opportunity to serve. It is my responsibility to take everyone along — seniors with respect and youngsters with affection and take the party as well as the state forward.”