Purple frog, believed to have co-existed with dinosaurs, set to be crowned Kerala’s state amphibian

Herpetologists believe that the species should be rightly called a ‘living fossil’ as it’s evolutionary roots suggest it could have shared space with dinosaurs going back almost 70 million years ago. 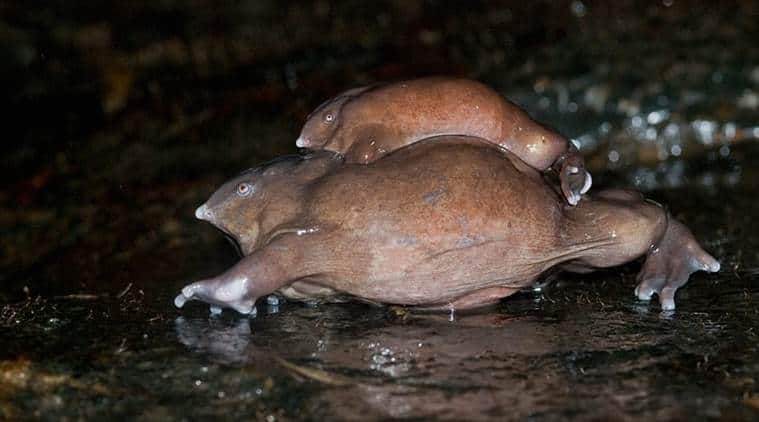 The tadpoles that emerge out of the eggs look identical to sucker fish and are found clinging onto rocks and boulders alongside these seasonal, fast-flowing streams. (Source: Sandeep Das)

There’s an amusing reason why Sandeep Das, a young researcher at the Kerala Forest Research Institute (KFRI), and other herpetologists like him in the state refer to the Purple frog, an odd-looking species endemic to the Western Ghats, as the ‘Maveli’ frog.

According to mythology, Mahabali, or Maveli, was a benevolent asura king who ruled over the region of Kerala but was banished into the netherworld by Lord Vishnu in order to appease the gods. But Maveli was granted one wish: he could return to Kerala for a single day and meet his subjects. This day in Kerala came to be celebrated as ‘Thiruvonam’, the most auspicious day of Onam when people would greet their old king. Quite similar to the lore of King Maveli, researchers have found that the Purple frog (Nasikabatrachus sahyadrensis), which lives almost its entire life in underground tunnels, comes out to the surface for a single day in a year to breed. Once it lays it’s eggs, the bloated frogs characterised by a protruding snout and powerful hind legs return to the earth’s deepest layers.

If all goes well, this intriguing frog species, listed as endangered on the red list of the International Union for Conservation of Nature (IUCN), could soon be designated as Kerala’s state amphibian – a title that researchers hope would go a long way in protecting it’s fragile habitat and knowing more about its rich antecedents. A proposal floated by Das for the same is set to come up on the agenda when a committee of the Wildlife Advisory Board meets later this month. Jafer Palot, a herpetologist with the Zoological Survey of India and a member of the Board, said when the proposal comes up for discussion, there’s unlikely to be any disagreement about bestowing the title on the Purple frog as there’s literally no similar species that can emerge as a strong contender.

“It’s a unique species that every amphibian expert is aware of. It’s endemic to this part of the southern Western Ghats and cannot be found anywhere else,” said Palot. Described for the first time in 2003 by two scientists in the jungles of Kerala, the species sparks feverish imagination among herpetologists worldwide for a number of reasons. For one, they believe that the species should be rightly called a ‘living fossil’ as it’s evolutionary roots suggest it could have shared space with dinosaurs going back almost 70 million years ago. That it was able to survive such a long period in time, points to its tenacity and could help scientists understand how it’s population may have evolved and learned to overcome the challenges of shifting land masses.

A year after it was documented, the frog’s closest relatives were found in Seychelles, an island in the Indian Ocean off East Africa. This discovery led many to ask whether the species could indeed be living proof of the theory of Gondwanaland.

“It is thought the two families shared a common ancestor that was subsequently isolated on different landmasses following the breakup of the supercontinent Gondwana,” a description of the frog on the website of the Evolutionarily Distinct and Globally Endangered (EDGE) programme reads. “Birds can fly. Mammals and rodents have often travelled the seas through ships and with voyagers. But amphibians can’t tolerate salinity. So it’s a possibility that the landmass could have been connected (for the species’ close relatives to be found on two continents today). Evolutionarily, it’s very distinct. It has a very old lineage,” Das said.

Because of its elusive nature, it took researchers almost seven years to understand it’s breeding style and diet. The Purple frog feeds mostly on soil-mites, ants and termites using its fluted tongue. The male and female frogs mate underground and once in a year, they come out on the surface to lay thousands of eggs near seasonal streams in the months of May-June. How they time their emergence onto the surface along with the onset of early rains is a mystery that continues to baffle naturalists.

The tadpoles that emerge out of the eggs look identical to sucker fish and are found clinging onto rocks and boulders alongside these seasonal, fast-flowing streams where they feed on algae. They are known to spend up to 120 days in the open before they metamorphose into frogs and make their journey into subterranean soil where they will live almost permanently. “Sometimes, we have found them when we dig wells up to 1.5 metres in the ground. But we still have little idea about their lives underground or how deep they burrow into the soil. We just know what happens when they come out,” said Das, who was a member of the team that uncovered the species’ breeding habits.

The fragile Western Ghats, classified as a biodiversity hotspot and a UNESCO World Heritage Site, is home to thousands of flora and fauna species that are not found anywhere else. But rapid deforestation and conversion of forest land into cropland with scant concern by elected governments continue to singe its ecosystem. With human settlements intruding deeper and deeper into animal habitats, the incidence of man-animal conflict especially with regards to elephants and tigers is increasing across the region.

The Purple frogs are not spared either. Over 50 per cent of their habitats lies outside the protected areas. The rampant construction of unauthorised check dams leads to submerging of the perennial breeding grounds of the frogs. Additionally, road networks lie close to their breeding grounds and hundreds of cases of road-kills go unreported every year.

“Once in Nelliyampathy (in Palakkad district), we found 36 frogs and their eggs smashed across the road by vehicles in just two hours. So they are coming out of the ground for just one day and this is happening,” said Das.

The idea, therefore, is to pronounce the Purple frog as an ‘umbrella species’ much like the tiger so that the habitat as well as other species, living in the same diversity, can be indirectly protected. “In a way, we believe that the Purple frog can be an ideal ambassador for the ecosystem that makes up the Western Ghats,” he adds.