Water levels in rivers rose across Himachal Pradesh, with the level in Pong Dam nearing danger mark. Bhakra Beas Management Board announced the release of 49,000 cusecs of water from Pong dam at 3 pm on Tuesday into Beas river. Around 1 lakh cusecs were released late night from Ropar barrage into Sutlej.

Road, rail and air traffic were disrupted throughout the day across the region. There were reports of 15-20 per cent Kharif crop damage (cotton, bajra, paddy and moong) across Punjab and Haryana. 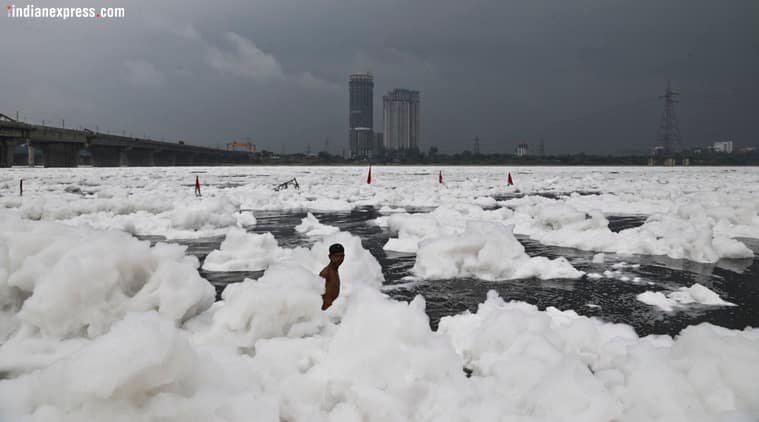 River Yamuna is overflowing with bubbling thick foam and filth. Appearing like snow, the toxic froth is full of residential and industrial waste whose foul stench could be smelt from a distance. The river is spilling over and flowing above the danger levels after Haryana opened the Hathnikund barrage in the wake of heavy rains and flash floods in parts of Uttarakhand, Himachal Pradesh and Punjab.

The plight of the river worsened after thousands of broken or semi-dissolved idols of Ganesha made of Plaster of Paris and coated with toxic chemicals such as mercury, cadmium, lead and carbon were immersed in the Yamuna on the occasion of Ganesh Chaturthi which commenced late last month. READ MORE

Around 300 people, including 45 IIT Roorkee students, who were stranded in various parts of Lahaul and Spiti district are safe, a Himachal Pradesh government official said Tuesday. Following snowfall, the Rohtang Pass and inner roads in the area got blocked due to which about 300 people, including the students who were on a trekking expedition, got stranded, Keylong Sub Divisional Magistrate Amar Negi was quoted as saying by PTI.

Negi said two Indian Air Force (IAF) helicopters have been sought from the state government for rescuing the stranded people. All the people, including the 45 students, who got stuck due to bad weather and snowfall are safe, he said. The stranded people were being provided shelter and food by the district administration.

State Chief Minister Jai Ram Thakur will visit Lahaul-Spiti district later in the day to take stock of the situation arisen out of recent snowfall, he said.

The water level in Yamuna has crossed the danger mark of 204.83 m and is flowing at 205.14 m right now. According to officials, the level is expected to touch 205.34 m by tonight and is expected to start lowering by tomorrow morning. The levels have risen in Himachal Pradesh, Punjab and Haryana. Delhi government officials are meeting to discuss whether those living on floodplains will be evacuated.

Clear skies in parts of Punjab!

#Punjab rains: Sun out in Punjab after three days of continuous downpour. Clear skies in Ludhiana, Jalandhar, Hoshiarpur, Fatehgarh Sahib, Rupnagar, Nawanshahr, Moga, Mansa, Faridkot among others. Cloudy at some places in Amritsar, Patiala and Sangrur but no rain @IndianExpress

A foreign tourist couple, who were trapped in snow in Jammu and Kashmir's Kargil district, was rescued on Tuesday, officials said. "Micheal Mobius and his wife got trapped in snow between Pudzong La and Rang dum on Monday," a district administration official said.

"They somehow sent a distress signal to the Maritime Rescue Coordination Centre, where we received an SoS following which the Deputy Commissioner of Kargil immediately requested the Divisional Commissioner Kashmir and Commissioner Civil Aviation Jammu and Kashmir to request the Air Force to launch a rescue operation."

An aerial rescue operation was launched on Tuesday morning and the couple were air-lifted by an Indian Air Force chopper to Leh, according to the official. The couple is currently undergoing treatment at a hospital

Eight travellers, who had gone missing from Lahaul-Sipti in Himachal Pradesh, were rescued and are safe at a camp, authorities said. The group comprise a woman from Brunei, Sanjida Tuba, a man from the Netherlands, Abby Lim, and six Indians — Priyanka Vora, Payal Desai, Dipika, Divya Aggarwal, Abhinav Chandel and Ashok had gone missing on Monday evening

According to IMD, the low-pressure area over Haryana and the neighbouring regions have become less marked and the rainfall is expected to decrease in the next 24 hours.

Continuous downpour in the past three days has resulted in excess rainfall in Punjab and Himachal Pradesh – more than the seasonal average. However, Haryana, as on Monday morning, was still deficit by 10 per cent of the average rainfall. According to the official data, Himachal Pradesh recorded a seven per cent increase and Punjab saw a six per cent increase in the rainfall than the normal owing to the continuous rainfall of past three days. Chandigarh in the region recorded the highest seasonal increase of rainfall — 14 % surge to the seasonal normal.

Villages near Sutlej put on high alert, police to identify weak buildings that may collapse

Villages near Sutlej River have been put on high alert in the wake of heavy rainfall in the state. A team of police personnel were deployed to monitor the situation and move out families to safe areas if required.

The police has also had a meeting with Army officials and have begun to identify weak buildings which may collapse due to rainfall.

“We have put villages near Sutlej river on high alert. Additional police force has been sent to Machhiwara from Khanna for checking and rehabilitation of border villages. If need be, we are ready to shift families to safer places. Two families have been shifted to a community centre in Khanna city-2 area after their homes were found to be weak and there was an apprehension of a collapse. More such buildings are being identified which may collapse due to continuous rain,” Khanna SSP Dhruv Dahiya said

“We have also arranged for safety equipments including boats, life jackets, ropes, torches, dragon lights, tubes etc as they will be needed for night patrolling today,” the SSP added.

Army units along the rivers Beas, Ravi and Sutlej have been asked to keep their flood relief columns ready in case the civil administration requisitions their deployment. “As of now the situation does not warrant any deployment but if the water level in the rivers rises and threatens habitations then we may be required to extend help,” said a senior officer.

The IAF activated its helicopters stationed at Air Force Station, Sarsawa, after receiving a request from Himachal government for the rescue of some persons stuck due to incessant rains at Kullu.

One MI-17 helicopter was launched from the helicopter unit based at Sarsawa, piloted by Squadron Leader Vipul Gupta with Sqn Ldr Dhiman as the co-pilot. The helicopter reached the spot and found 19 people stranded on an islet on the swelling Beas river. “The pilot brought the helicopter to a low hover and the crew helped the stranded people into the aircraft. They were then flown to the local airfield of Bhuntar,” the IAF spokesperson said. Read more

Farmers in Haryana and Punjab complain of crop damage due to continuous rainfall. "It has been raining continuously since 3 days. All the crops are damaged. The crops which we had already sent to the market are damaged too and are not getting any buyer," a farmer from Karnal said.

Cotton, another major kharif crop, has also left farmers concerned as rains could hit its yield at this point of time when the harvesting is underway. "Cotton is at picking stage and rains have come as a blow for farmers," said an official of the Haryana Agriculture Department. Farmers have sought adequate compensation for the damage. "We have demanded from the government to get revenue assessment done of damaged crop and also sought adequate compensation to affected growers," Bhartiya Kisan Union (Ekta Ugrahan) general secretary Sukhdev Singh said.

Agriculture department officials said that the damage would be more because the final assessment of damage can be done only after the rain stops. Read more 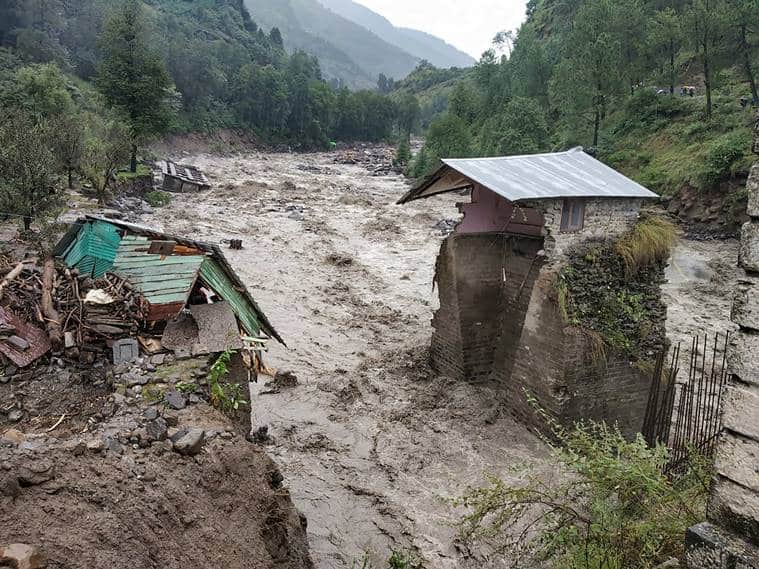 After hours of incessant rains in the Kedarnath Valley in Uttarakhand’s Rudraprayag district, a five metre stretch of the bridle path near Lincholi, which falls on the way to Kedarnath, was washed out today afternoon, leaving over 500 pilgrims stranded in the Valley. Another landslide at Phata, around 15 kms from Kedarnath, resulted in the national highway getting blocked.  Rudraprayag District Magistrate Mangesh Ghildiyal said, “(Over) 500 pilgrims who were returning from Kedarnath got stranded at Lincholi (8 kms from Kedarnath) when a five-metre stretch of the bridle path got washed out due to continuous rains.”

On the possible outbreak of water-borne diseases, Punjab CM has asked the Health Department to take preventive measures by organising special medical checkup camps and arranging sufficient stock of medicines in this behalf

Punjab CM has asked his ministers and MLAs to tour their respective areas extensively to assess the ground situation and tie up with the concerned departments for immediate redressal of hardships being faced by the people.

With just one day of rain, Punjab has made up for the monsoon shortfall, but at the wrong time for farmers preparing for the harvest at month end. Punjab’s normal rainfall is 490 mm for the period from June to September end. Till September 22, Punjab had received only 391 mm rain but with Saturday’s rain, it has now gone up to 442 mm.

Meanwhile, in J&K's Kathua district rescue and police teams have been deployed at various areas following flash floods triggered by incessant rains. In Doda district, authorities have ordered the closure of all educational institutions as a precautionary measure and also set up control rooms in view of heavy rains in the Jammu region since the last two days.