While Singh slammed Khattar for stopping farmers from moving towards the national capital, terming it as "totally undemocratic and unconstitutional", the latter told the Punjab chief minister to stop "inciting innocent farmers".

Ahead of the “Delhi chalo” protest march by farmers against the Centre’s contentious farm laws , Delhi Metro services from neighbouring cities to the national capital will remain suspended on Friday, DMRC announced. However, metro services will be available from Delhi towards the NCR sections.

Thousands of Punjab farmers protesting against the contentious farm laws as part of their ‘Delhi Chalo’ march have entered Haryana. Police used water cannons and tear gas to disperse the farmers who broke barricades, throwing some into the river at the state’s border with Haryana. Two government and a private vehicle was also vandalized on the Jind-Patiala highway.

A while back, Shiromani Akali Dal chief Sukhbir Singh Badal on Thursday slammed the Haryana government for trying to thwart farmers ‘ ‘Delhi Chalo’ march, terming the attempt as “Punjab’s 26/11”. “Today is Punjab’s 26/11. We are witnessing the end of the right to democratic protest. @Akali_Dal condemns the Haryana govt & Centre for choosing to repress the peaceful farmer movement,” said Badal in a tweet.

Meanwhile, Haryana Chief Minister Manohar Lal Khattar and his Punjab counterpart Amarinder Singh entered into a war of words on twitter over the farmers protest. While Singh slammed Khattar for stopping farmers from moving towards the national capital, terming it as “totally undemocratic and unconstitutional”, the latter told the Punjab chief minister to stop “inciting innocent farmers”.

Read highlights on the farmers protesting against the Farm laws in Delhi.

Farmers' Delhi Chalo protest on Thursday saw an overwhelming response from women as they joined elderly farmers and youth to press the Centre to scrap three farm laws.

Stating that they were ready for a "do or die" battle against the union government, women owing allegiance to various farmers' outfits braved cold weather to set out for Delhi. A number of them travelled on tractor trolleys carrying ration and other essentials to participate in the protest. "We have brought with us enough stocks of ration, quilts, mattresses and other essentials.

We are prepared for this 'do or die' battle and will rest only when the Modi government rolls back the farm laws," a 68-year-old woman, who was travelling in a tractor with her family, said. Near the Bathinda-Dabwali border, women under the banner of Bharatiya Kisan Union (Ekta-Ugarhan) participated in a sit-in and shouted slogans against the BJP-led government at the Centre

Punjab farmers' body to stay put at border only

In a late-night decision, farmers under the banner of BKU (Ugrahan) have decided to stay put at the borders instead of entering Delhi.
The body had earlier decided to enter the capital on Friday noon.

#FarmersDilliChalo : in a late night decision, BKU( Ugrahan) - the largest farmers'union of #Punjab decided to march for #Delhi Friday noon. Thursday they had decided to stay put at borders only. @iepunjab @IndianExpress

Air India has said passengers affected due to traffic disruption on Thursday amid closure of the borders of the national capital region (NCR) will be allowed to reschedule their flights for free. People coming to the national capital from Haryana and Uttar Pradesh faced traffic snarls at several border crossings as the Delhi Police intensified vehicle checking in view of the 'Delhi Chalo' march by farmers from Punjab against the Centre's farm laws.

#FlyAI: In view of traffic disruption in NCR region due to closure of Delhi borders, we are allowing no-show waiver & one free reschedule to passengers who couldn't report for their flights.

Waiver will be valid for flights scheduled out of Delhi airport only for 26th Nov '20.

Farmers protest: Security beefed up at India gate and nearby areas

Delhi Police personnel have been deployed in large numbers in border areas of the national capital and all incoming vehicles are being checked in view of the 'Delhi Chalo' march by Punjab farmers against the Centre's farm laws. Security was also beefed up  at India gate and nearby areas.

Over 70 people were detained on Thursday when they were staging a protest at the Jantar Mantar in Delhi in support of Punjab farmers, who are agitating against the Centre's farm laws. The protesters included members from Left-backed trade unions, the Students' Federation of India. Students from the Jawaharlal Nehru University also participated in the protest. 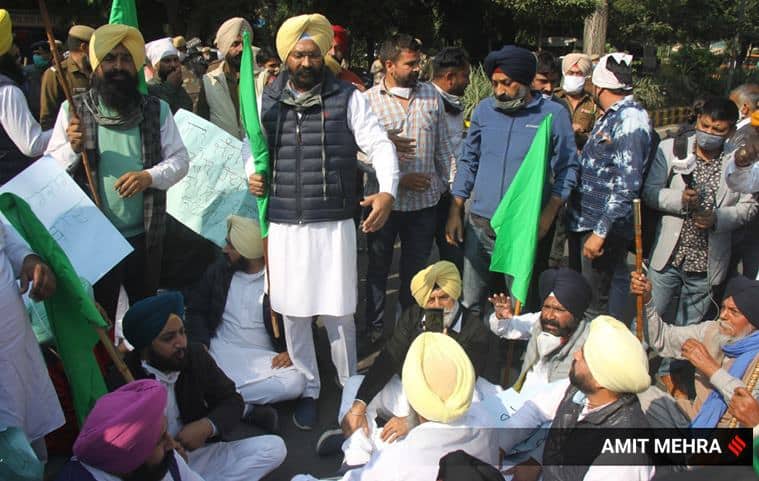 Left parties slam BJP over use of teargas, water cannons on protesting farmers in Haryana

The Left parties on Thursday hit out at the BJP-led Haryana government for using water cannons and tear gas on farmers moving towards the national capital against the Centre's farm laws, saying it revealed the "anti-farmer face" of the saffron party. "This is an attack on the farmers by the BJP government. The CPI has always stood in support of the farmers and the violence against them is highly condemnable. This shows the true anti-farmer face of the BJP," said CPI general secretary D Raja.

In view of the 'Delhi Chalo' march call being carried out by the farmers' organizations, Haryana Police today advised citizens to avoid travelling at entry points from Haryana to Delhi on National Highway No 10 (Hisar-Rohtak-Delhi) and National Highway 44 (Ambala-Panipat-Delhi) as they may face inconvenience and trouble on these routes.

Giving this information here today, the Director General of Police (DGP) Haryana, Sh Manoj Yadava said:" Our field units today tried to prevent farmers coming from Punjab from entering Haryana in a restrained manner at the district border points. The police also tried to convince them by establishing barricades. But the agitating farmers not only damaged the police barricades, but proceeded by removing all the blockades and obstructions in an unlawful manner. Acting with restraint, police did not use force on the agitating farmers. On the contrary, the farmers took an aggressive stand and tried to disturb the law and order by pelting stones at the police in many places. In this entire episode, not only a number of police personnel were injured but police and private vehicles were also damaged."

Normal life came to a complete halt in Left-ruled Kerala while it was partially affected in West Bengal, Tripura, Tamil Nadu and Odisha due to the 24-hour nationwide strike called by various trade unions in protest against the Centre's economic policies and contentious farm laws. While intermittent clashes between Left activists and police were reported in several parts of Bengal, other states saw road blockades, leading to disruption of vehicular movement.

The bandh, called by 10 central trade unions, except the BJP-aligned Bharatiya Mazdoor Sangh, was near total in Kerala, with government offices, business establishments and banks remaining shut. The streets were also deserted as private buses, auto rickshaws and taxis did not ply.

Delhi Metro services from neighbouring cities to the national capital will remain suspended on Friday in view of the ''Delhi chalo'' protest march by farmers against the Centre's new farm laws, officials said. However, metro services will be available from Delhi towards the NCR sections, they said.

As advised by Delhi Police, Metro services will be available only from Delhi towards the NCR sections. However, services from the NCR stations towards Delhi will not be available due to security reasons till further notice.

Punjab Chief Minister Captain Amarinder Singh’s tweets stating that the Haryana government was “provoking” the farmers and violating their rights by not allowing them to go to Delhi elicited a sharp response from his Haryana counterpart Manohar Lal Khattar, who said it was Amarinder who was “inciting” the farmers and that he should stop playing “cheap politics in the time of pandemic”.

The central government is treating farmers as "enemy of the State", SAD leader Harsimrat Kaur Badal alleged on Thursday, condemning the use of force to stop them from marching towards Delhi in protest against the Centre's farm laws. Badal had resigned from the Union Cabinet in September in protest against three farm sector bills, which later got the President's assent after being passed by Parliament. She was the Union minister for food processing industries. The Centre should not adopt a policy of confrontation with farmers. It should instead talk with them and resolve their grievances, Badal told PTI. "Using force against farmers on Constitution Day has turned the day a 'black day' for 'annadattas' of the country," the Shiromani Akali Dal (SAD) leader said.

Quixplained: Why are famers protesting?

Quixplained in a minute: Why are Punjab farmers protesting? pic.twitter.com/4bZtpcfRlL

Thousands of Farmers from Punjab have finally entered Haryana after facing water cannons and. Many vehicles were vandalised on the Jind- Patiala highway. Stone pelting was also reported.

The Delhi Police ismonitoring traffic movement on the Delhi-Gurgaon Border as protesters from Punjab head to Delhi. Express Photograph by Tashi Tobgyal. 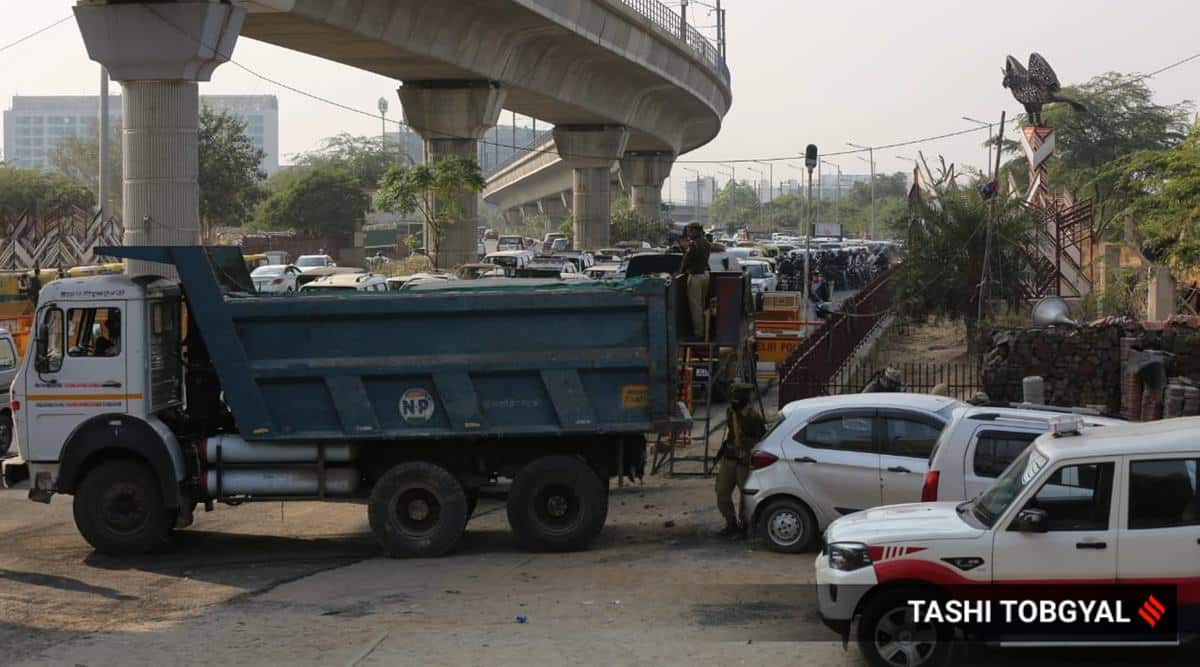 In response, the Punjab CM said that he was ashamed of Khattar's response. 'It's the farmers who've to be convinced on MSP, not me. You should've tried to talk to them before their Dilli Chalo. And if you think I’m inciting farmers then why are Haryana farmers also marching to Delhi,' said Singh

Farmers at Delhi-Ambala highway. More farmers are joining the protest rallies from nearby areas in their tractor trolleys. 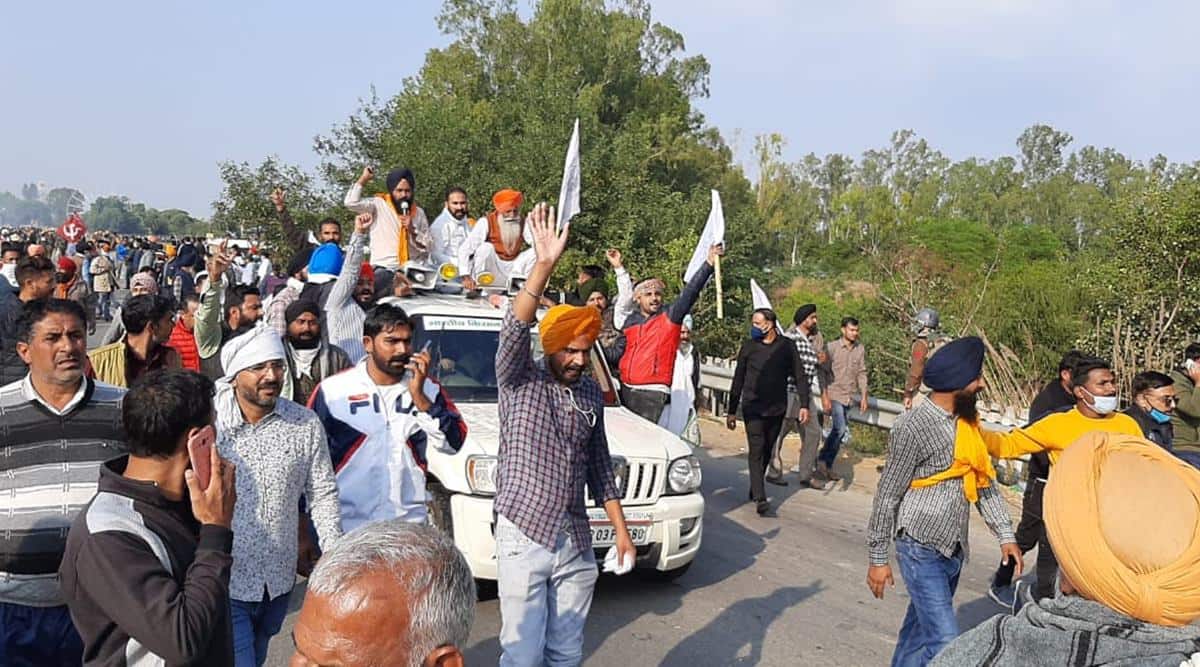 We are witnessing the end of the right to democratic protest: Sukhbir Badal

Shiromani Akali Dal (SAD) president Sukhbir Badal condemned the Haryana government and Centre for choosing to repress the peaceful farmer movement. He said, " Today is Punjab’s 26/11. We are witnessing the end of the right to democratic protest."

Today is Punjab’s 26/11. We are witnessing the end of the right to democratic protest. @Akali_Dal_ condemns the Haryana govt & Centre for choosing to repress the peaceful farmer movement.

Women have gathered on the NH-54.. Bathinda- Dabwali road to protest against the

#FarmersDilliChalo : gathering of women on NH-54.. Bathinda- Dabwali road. They are sitting towards #Punjab side and have not broken any barriers set up by #Haryana govt. @iepunjab @IndianExpress pic.twitter.com/nB6qw1FcRJ

The Ambala-Delhi highway in Haryana's Kurukshetra district was witness to dramatic scenes as police used water cannons on agitating farmers to prevent them from proceeding to the national capital. Making their way through boulders and barricades laid on the road by the police, the farmers continued to march towards the national capital as part of the November 26 "Delhi chalo" call given by Punjab and Haryana farmers protesting against the contentious farm laws.

Why are Punjab's farmers marching to Delhi despite state passing own farm Bills?

The three Bills passed by the Punjab Vidhan Sabha underscore that agriculture, agricultural markets, and land is the primary legislative domain of the state. Seeking to address one of the main grievances of the protesting farmers, the Bills, among other things, make minimum support price (MSP) a legal provision.

Farmers say they are happy with the state passing the three Bills, but point out that the proposed state legislations are at best a symbolic political statement against the Centre's farm laws and may remain entangled in legal complications. The Bills can become law only if they get Presidential assent, which they say, is highly unlikley.

“We are protesting because the central laws have legal value. The state's Bills do not have the same legal validity. We will not sit till the time the anti-farmer laws are not revoked or a Bill related to MSP is not passed by the Centre. Agriculture is a state subject and Centre could not create confusion by passing laws on subjects in state list,” says Jagmohan Singh, general secretary, Bharti Kisan Union (Dakuanda). He says that now the fight is not only for the farmers of Punjab but for the farmers of the entire country and that is why we are protesting “despite state passing its own Bills”.