The ruling BJP claimed that 17 MPs from the two Houses of Parliament and 126 MLAs from states defied respective party lines and voted for Murmu. Many regional parties, despite their political reservations against the BJP, had indicated their willingness to see Murmu in Rashtrapati Bhavan. 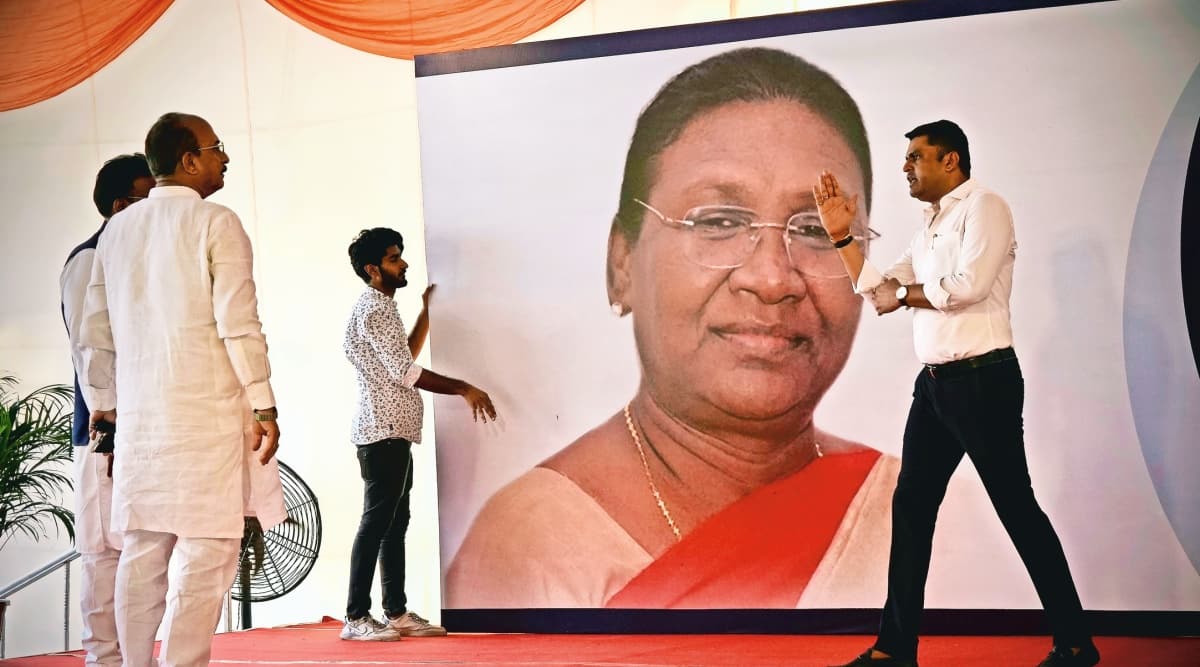 Workers put up a giant hoarding of Draupadi Murmu for her felicitation, before she was announced as the country's new President, in New Delhi, India, Thursday, July 21, 2022. (AP Photo)

As counting of votes in the Presidential election concluded Thursday, it became clear that NDA candidate Droupadi Murmu’s spectacular win had also been helped by some cross-voting. It was also proof of the division and confusion in Opposition ranks over thwarting the first tribal woman’s bid to occupy the highest office in the country.

The ruling BJP claimed that 17 MPs from the two Houses of Parliament and 126 MLAs from states defied respective party lines and voted for Murmu. Many regional parties, despite their political reservations against the BJP, had indicated their willingness to see Murmu in Rashtrapati Bhavan.

She bagged 2824 of the total 4701 valid votes, leaving just 1877 votes for the Opposition’s Yashwant Sinha.

According to BJP leaders, 10 MLAs in Gujarat, 22 in Assam, 12 in Uttar Pradesh and 4 in Goa cross-voted for Murmu. The details will be available only after a thorough assessment of the state-wise voting pattern.

With Sinha failing to get the expected votes, there is a question mark on Opposition unity. But leaders of Opposition parties pointed out that many among them had no choice except to stand with Murmu to protect their tribal support base.

Murmu secured the support of the entire House in Andhra Pradesh, Nagaland and Sikkim because Sinha drew a blank in these states. She even managed one vote from Kerala, a state where the BJP could not win a single seat in the Assembly or in the Lok Sabha polls.

In Telangana, a state where the BJP hopes to emerge as an alternative, the NDA candidate could manage only 3 votes while Sinha bagged 113 votes.

While the counting was on, BJP leaders claimed that Murmu would win the election with almost 70 per cent of the votes in the electoral college.

But the BJP and allies losing power in key states like Rajasthan, Chhattisgarh and Tamil Nadu and the drop in its seat tally in Madhya Pradesh, Maharashtra and Gujarat seem to have contributed to the fall in the votes for the NDA candidate. For example, in 2017, Kovind received 166 votes in Rajasthan which dropped to 75; in Tamil Nadu where its ally AIADMK was defeated by the DMK, it fell from 134 to 75; in Maharashtra, from 280 to 181; in Gujarat, it dropped from 132 to 121; in Madhya Pradesh from 171 to 146; and in Punjab where the AAP stormed to power, the NDA candidate could manage only 8 votes as against 18 in 2017.