Seven months after highlighting NRC in his address to a joint-sitting of Parliament, President Kovind’s address today had no mention of what the government said was to be done on a ‘priority basis’. 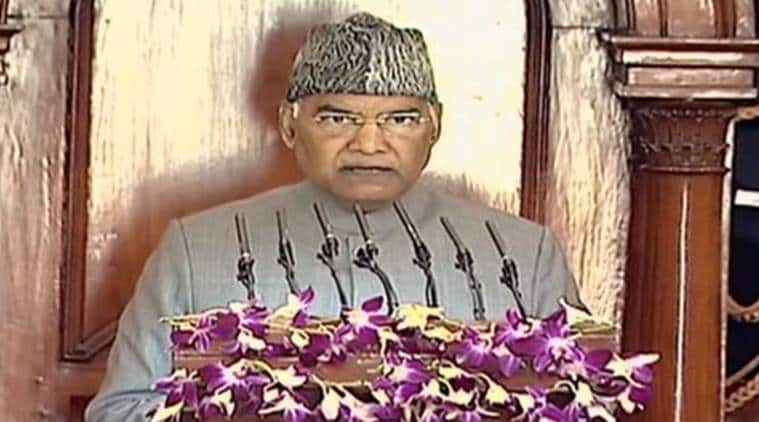 In the backdrop of nationwide protests over the Citizenship (Amendment) Act (CAA) and National Register of Citizens (NRC), President Ram Nath Kovind Friday sidestepped references to NRC in his address to the joint sitting of both Houses of Parliament at the start of Budget session.

His omission holds significance in wake of the fact that the President had announced Modi government’s decision to “implement the process of ‘National Register of Citizens’ on priority basis” in his address to the joint sitting at the inauguration of 17th Lok Sabha on June 20 last year.

“Illegal infiltrators pose a major threat to our internal security. This is leading to social imbalance in many parts of the country, as well as putting a huge pressure on limited livelihood opportunities. My Government has decided to implement the process of ‘National Register of Citizens’ on priority basis in areas affected by infiltration. Security along the border will be further strengthened to prevent infiltration,” President had announced on June 20 last year while declaring the intention to “ amend the Citizenship Act”.

“While on the one hand, the Government is working to identify the infiltrators, on the other, it is also fully committed to protecting the victims of persecution due to their faith. In this regard, efforts will be made to amend the Citizenship Act while protecting the linguistic, cultural and social identities,” President had said in June last year.

The Amendment to the Citizenship Act, in fact, was eventually carried out by the Parliament during the winter session last December. The passage of CAA, however, triggered nationwide protests over Home Minister Amit Shah’s assertion for a nationwide NRC made during his reply to the debate on the Citizenship Amendment legislation.

However, the President today referred to the CAA in his address to the joint sitting of both the Houses, there was no mention of NRC in his speech today:

“India has always believed in the principle of equal respect for all faiths. However, at the time of Partition, this very belief of India and of its people came under the most severe attack. In the environment prevailing in the aftermath of partition, the Father of the Nation Mahatma Gandhi had said: “Hindus and Sikhs of Pakistan, who do not wish to live there, can come to India. It is the duty of the Government of India to ensure a normal life for them.” Many national leaders and political parties have from time to time supported this idea of Pujya Bapu and further propagated it. It is our responsibility to honour this wish of the founding fathers of our nation. I am happy that both the Houses of Parliament have fulfilled this wish, by enacting the Citizenship Amendment Act. At a time when the country is celebrating the 150th birth anniversary of Gandhi ji, all of you have given paramount consideration to this sentiment. I congratulate both the Houses of Parliament and all the MPs for this.”

“My Government would like to clarify once again that the procedures which have existed for people from all faiths of the world who believe in India and who wish to obtain Indian citizenship, remain unchanged. A person of any faith can follow these processes and become a citizen of India. The Government has made several provisions to ensure that granting citizenship to those who have been compelled to take shelter in India does not have any adverse cultural impact on any region, especially the North East.”