Various changes have been introduced in the execution of the government's skilling programme to generate more jobs, but to no avail. An average of just over one out of six people trained under the scheme have found a job. 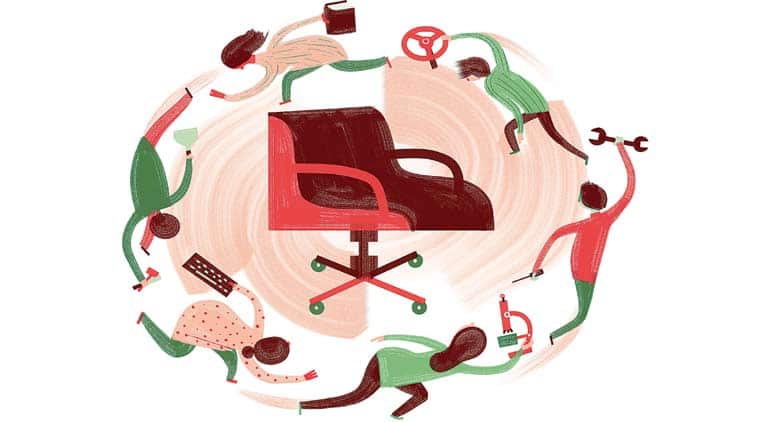 Under the relaunched PMKVY, which started October 2, 2016 placement tracking has been made mandatory. (Illustration: C R Sasikumar)

The government’s flagship skilling scheme — Pradhan Mantri Kaushal Vikas Yojana (PMKVY) — continues to grapple with the issue of achieving end-results, despite fresh attempts to redirect its focus to district-level schemes for overcoming the challenge of sub-optimal results. Under the PMKVY, according to latest data from the Ministry of Skill Development and Entrepreneurship, out of the 29.69 lakh people who were trained as on February 1, 2018, only 5.39 lakh have been placed — translating into an average of just over one out of six people trained under the scheme having found a job.

With the scheme struggling to show results, the Centre had, in September last year, proposed a shift in focus to district-level projects to yield better results in the short-term. Till the last fiscal, it was not mandatory for training providers to report employment data under the scheme. Under the relaunched PMKVY, which started October 2, 2016 with an outlay of Rs 12,000 crore to impart skilling to one crore people over four years (2016-2020), placement tracking has been made mandatory.

Under the scheme, an initiative has also been taken to set up Model Skill Centres called Pradhan Mantri Kaushal Kendras (PMKKs), in districts. As on December 15, 2017, 527 PMKKs have been allocated throughout the country.

The low placement numbers had led to realisation within the government that the PMKVY scheme is struggling because of lack of quality training and information asymmetry regarding the demand-supply dynamics of skilled candidates, a senior government official said. With this change, the focus has been shifted to getting greater participation of states, bringing district collectors into the picture to ensure delivery at the district level and monitoring of skilling schemes at the ministry level. 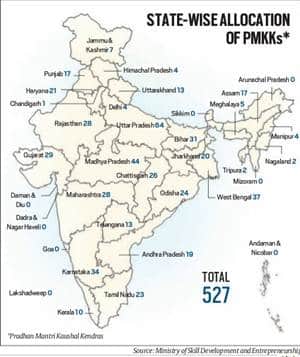 The Ministry of Skill Development and Entrepreneurship had also undertaken a district-level data-crunching exercise to know the specific demand-supply conditions for each district, something that was not happening under the PMKVY scheme until now. So far, there has been information asymmetry on the required number of skilled candidates versus the availability of jobs under the scheme, the official said. The Ministry had also proposed to keep the implementation agency for PMKVY, National Skill Development Corporation (NSDC), away from implementation of the proposed district-level plan.

“NSDC can help with capacity creation and serious technical assistance. It can be part of preparation of district-level plans. NSDC’s responsibility is something else, not schemes,” the official said. The ministry also plans to involve industry in a “massive manner”, especially the MSME sector. “We plan to follow a cluster-based model such as training candidates in a group in a specific region. They can do basic training, the cost of which will be borne by the government,” the official said.

The Ministry of Skill Development and Entrepreneurship was set up in 2014 by the NDA government with the ambition to impart skills and apprenticeship. In the last cabinet reshuffle in September 2017, Dharmendra Pradhan was given additional charge as Minister of Skill Development and Entrepreneurship after removal of the Minister of State with Independent Charge Rajiv Pratap Rudy.

Rudy had said that the aim of his ministry was not to ensure jobs but to make the candidates employable and had initiated a shift in the stance of the ministry’s skill training from being supply-driven to demand-driven. A total outlay of Rs 1,500 crore was approved for PMKVY by the Union Cabinet in 2015-16 and Rs 12,000 crore for 2016-2020, to impart skill training to one crore people over four years. Until March 16, 2017, Rs 2,885 crore had been transferred to NSDC for implementation of PMKVY. The objective of this Skill Certification Scheme is to enable the youth to take up industry-relevant skill training that could help them in securing a better livelihood. Individuals with prior learning experience or skills will also be assessed and certified under another scheme head called the Recognition of Prior Learning.

Gujarat: Protem Speaker, 2 former MLAs convicted of bid to bribe voters, get a year in jail