Under PMJAY, most claims for dialysis

This, despite the fact that the Pradhan Mantri National Dialysis Programme, which was rolled out in 2016, also provides free dialysis to kidney patients in district hospitals. 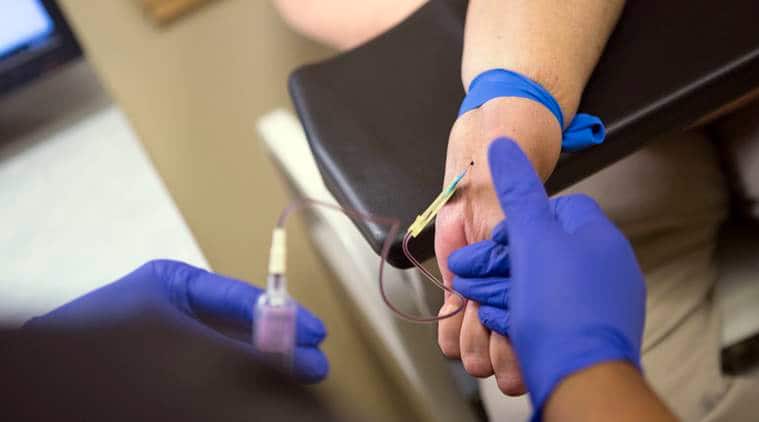 Nine months after the Pradhan Mantri Jan Arogya Yojana (PMJAY) was launched, dialysis has emerged as the most claimed package under the scheme. This, despite the fact that the Pradhan Mantri National Dialysis Programme, which was rolled out in 2016, also provides free dialysis to kidney patients in district hospitals. The rising number of claimants under PMJAY is proof of India’s hypertension and kidney disease burden.

Of the 30.78 lakh beneficiaries in the 277 days since the government’s flagship health scheme was launched, 4,55,155 claims of hemodialysis — a procedure where the kidney function is performed by an external contraption when the organ is not working at full capacity — have been cleared. According to government data, every year, about 2.2 lakh new patients with end stage renal disease get added in India, resulting in additional demand for 3.4 crore dialysis every year. 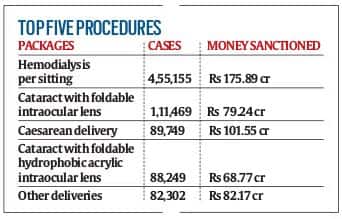 Cataract surgeries, which in the initial days of PMJAY had emerged as the most claimed procedure, have been pushed to second position with 1,99,718 claims.The third most claimed procedure are deliveries – 1,72,051, with 89,749 of the claims having been made for Caesarean deliveries and 82,302 for other kinds (normal/breach/ forcep/ vacuum). Both deliveries and cataract surgeries are also available free of cost under the Janani Shishu Suraksha Karyakram (JSSK) and the National Programme for Control of Blindness and Visual Impairment (NPCBVI) respectively.

Under PMJAY, Rs 2,000 is paid per hemodialysis sitting to any empanelled government or private hospital. For deliveries, the amount paid is Rs 9,000 and for cataract surgery, depending on the type of surgery, Rs 6,500-10,500. Under the national programmes, each of these is done free of cost at designated government facilities. Caesarean deliveries, in most states, have been placed either on the list of procedures for which either a pre-authorisation is required for reimbursement at a private hospital or can only be done under PMJAY at a government facility.

PMJAY is the tertiary care arm of Ayushman Bharat under which eligible families are provided an annual health cover of Rs 5 lakh.

While NHA CEO Dr Indu Bhushan refused to comment on whether there is a need to relook packages, sources said the authority was looking at weeding out procedures that are already covered under other national programmes. Diseases for which there are existing national programmes and for which treatment is reimbursed under PMJAY include tuberculosis, chronic kidney disease (dialysis), leprosy, malaria, HIV-AIDS and mental health disorders.

Among the other diseases/procedures that feature in the list of top 10 claims are root canal treatment (62,043), cholera or enteric fever (65,648) and acute gastroenteritis with moderate dehydration (54,680).

In terms of total claims, Chhattisgarh, Gujarat and Maharashtra top the list with 4,68,438, 3,33,883 and 2,98,208 claims respectively. Goa has registered just six claims. Assam has registered 32,381 claims against a mere 184 e-cards. Officials said this was because besides the e-cards issued by the National Health Authority, the scheme was being rolled out largely through cards issued by the state government.