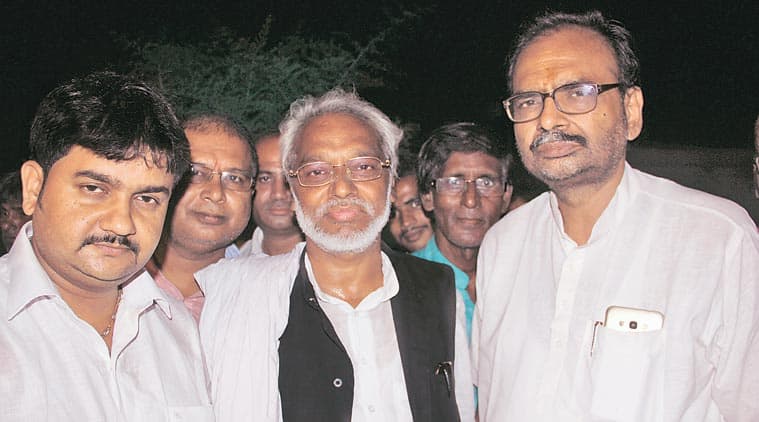 It’s well past midnight but Raxaul is wide awake. The road to Nepal has been blocked by Madhesis, but a crowd has gathered outside the home of Mahesh Kumar Agrawal, who has offered space to set up a langar (canteen) for the protesters.

Agrawal, who runs Mahima Exports, is a well-known businessman in this border town. He is also a BJP activist. And under the glow of electric bulbs near the open gate of his home, it’s clear that the agitation against Nepal’s new Constitution is spilling over into the politics of Bihar too, where two alliances are fighting a close electoral battle this month.

“I am taking care of this humanitarian camp where the community has been providing food to our Madhesi brothers who are sitting on dharna on the bridge and have blocked the road. They have a genuine cause. For us, it is both a social and national cause,’’ Agrawal told The Sunday Express.

Agrawal said this initiative was “above political considerations” and driven by local residents who have a “roti-beti” (economy and blood) relationship with the Madhesis on the other side. But he is equally sure that the handling of the Nepal issue by India would impact the elections in Bihar.

“If the BJP government (at the Centre) commits a wrong move, it will affect the party in the elections. But if it takes the right step, it will benefit as well. For around 50 km inside Bihar from the border, it is a beti-roti relationship of people joined by blood ties and trade for centuries. This border can’t separate us, we are the bridge between the two countries,” said Agrawal.

READ: Nepal deadlock: What India needs to do

According to him, “people in 40 per cent of Bihar’s assembly constituencies are related to Madhesis”. “Everyone here is closely watching how the central government deals with this situation,” said Agrawal.

“So far, people are happy that India has taken a strong stand. We need to put the ‘Paharis’ (hill people) in their place. We have been doing so much for them and see what they are doing — burning our flag and the effigy of our Prime Minister,’’ he said.

“They have been blackmailing us for too long. Let them seek support of China. At least 67 per cent of Nepal’s foreign trade and 80 per cent of its petroleum products go through this border. This agitation and blockade will expose them,” said Agrawal.

However, BJP leaders from the region, including MP Sanjay Jaiswal and MLA Dr Ajay Kumar Singh, have stayed away from the agitation site as well as the camp “because of its diplomatic ramifications”.

Last Thursday, Agrawal had a special guest for dinner: Rajendra Mahto, president of the Nepal Sadbhavana Party (NSP) which is actively involved in the Madhesi blockade. “What is good for India is good for Madhesis. The nationalism of the Nepali-speaking people, the Paharis, is based on opposition to India and anti-Indian sentiment alone. Only a strong Madhesi can weaken that anti-India drive,” said Mahto.

Referring to the agitation, Mahto said: “It is not India’s dharna. It is our dharna. Let them resolve the issues with this Constitution and accept our genuine demands — we are only seeking equal rights — this blockade will vanish in seconds”.

The Indian administration has so far been silently monitoring the situation while being visibly sympathetic towards the Madhesi agitators. Yet, there is apprehension — on both sides of the border — that India may come under pressure to remove the blockade.

“They (Nepal government) want to turn the Madhesis into slaves,” said Suresh Kumar Gupta, who stays on Naga Road in Raxaul, adding that his wife is from Dakela Bhaveri, 15 km from Birganj on the other side. “My sister is married in Birganj too… If the Indian government buckles and puts pressure on our Madhesi brothers, we will come out on the roads, too. We will break the bridge on the canal, let them do whatever they do then,’’ said Gupta as the others gathered around nodded their heads in agreement.

Outside on the street, as groups of men leave for the bridge where they would spend the night, they shout: “Jai Madhes”. Across the market, men sit in groups around paan kiosks, discussing the agitation. The only visible difference between the Madhesi visitors and local residents is the colour of their motorcycle number plates: red for Nepali citizens.