Describing the poem as “pointless angst expressed in a state of agitation”, the editorial says the words had been “misused by forces who are anti-Centre and anti-Centre's nationalist ideologies”. 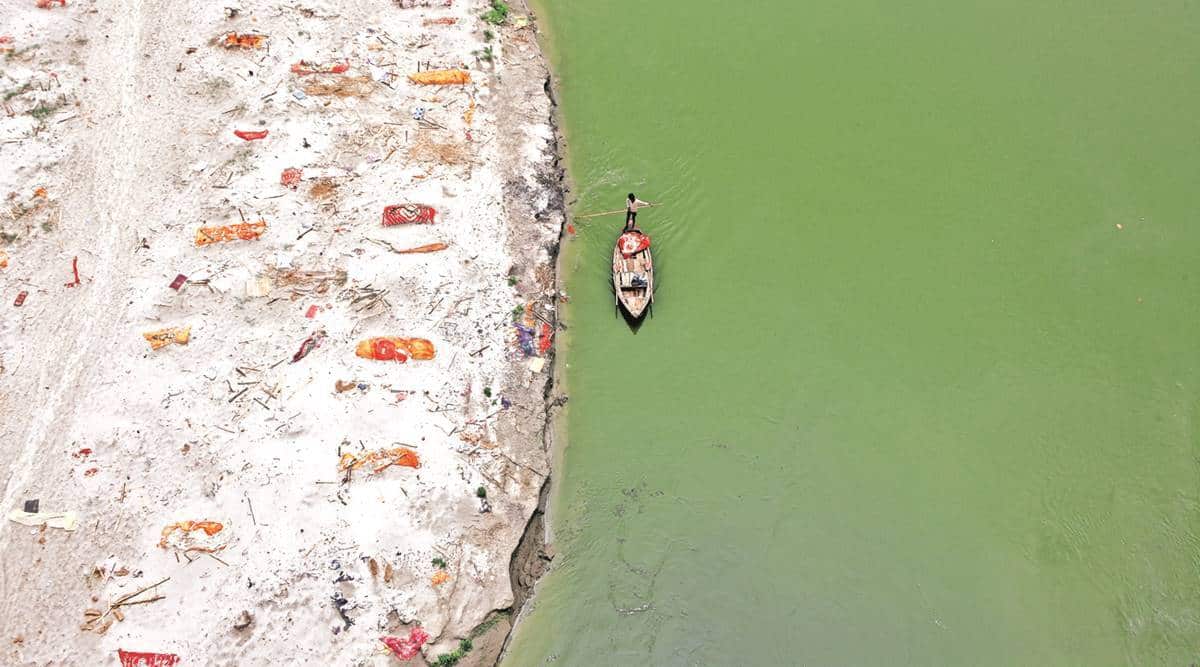 A boat rows past shallow sand graves on the banks of the Ganga on the outskirts of Prayagraj. (Reuters/File)

An editorial in the June edition of Gujarat Sahitya Akademi’s official publication, Shabdashrushti, has hit out at a poem by Gujarati poet Parul Khakhar on the bodies of suspected Covid victims found floating in the Ganga in Uttar Pradesh and Bihar for spreading “anarchy”. It also called those who discussed or circulated it “literary Naxals”.

The Akademi’s chairman, Vishnu Pandya, confirmed writing the editorial. While it does not mention Shav Vahini Ganga specifically, he also confirmed that he meant the poem, which has drawn much praise and been translated into several languages.

Describing the poem as “pointless angst expressed in a state of agitation”, the editorial says the words had been “misused by forces who are anti-Centre and anti-Centre’s nationalist ideologies”. “The said poem has been used as a shoulder to fire from by such elements who have started a conspiracy, whose commitment is not to India but to something else, who are Leftist, so-called liberals, to whom nobody pays any attention… Such people want to quickly spread chaos in India and create anarchy… They are active on all fronts and in the same way they have jumped into literature with dirty intentions. The purpose of these literary Naxals is to influence a section of people who would relate their own grief and happiness to this (the poem).” While in Gujarati, the editorial uses the term “literary naxals”.

The editorial goes on to note that Khakhar’s earlier works had been published by the Akademi, and she “ would be welcomed by Gujarati readers if she wrote some good pieces in the future”.

Pandya told The Indian Express: “There is no essence of poetry in it (Shav Vahini Ganga) and neither it is the proper way to pen down poetry. This could be merely venting out one’s anger or frustration, and it is being misused by liberals, anti-Modi, anti-BJP and anti-Sangh (RSS) elements.”

He added that he had no “personal grudge” against Khakhar. “But this is not a poem and several elements are using it as a weapon for social fragmentation…”

Khakhar had posted the 14-line poem on her Facebook page on May 11. Despite repeated attempts Wednesday, she could not be contacted.