PM Modi in Gujarat Highlights: On his day-long visit, PM Modi will also address a public gathering at Anjar and later travel to Rajkot where he will inaugurate a museum dedicated to Mahatma Gandhi.

PM Modi in Gujarat Highlights: The prime minister is on a day-long visit to his home state, where he will inaugurate a host of development projects. (Source: Twitter/@narendramodi)

Prime Minister Narendra Modi is visiting Gujarat on Sunday, where he is scheduled to inaugurate a host of development projects in Anand, Khatraj and Anjar, and a museum dedicated to Mahatma Gandhi in Rajkot. The Prime Minister inaugurated several projects of Amul in Anand, including a chocolate plant with a capacity of 1,000 tonnes per month.

Praising the dairy major Amul, PM Modi said, “Today, Amul has become an inspiration world over. People from overseas also ask me about Amul. Amul is not only about milk processing. This is an excellent model of empowerment.”

He also remotely inaugurated a Rs 20 crore ice cream plant of Vidya Dairy and Anand Agricultural University’s incubation-cum-centre for excellence in food-processing. Later, he will address a gathering of farmers at Mogar.

He will travel to Anjar in Kutch district and inaugurate a slew of projects, including a natural-gas pipeline laid by Gujarat State Petronet Ltd between Mundra Port and Anjar, a national highway connecting Anjar and Bhimasar in Rajasthan. He will also address a public gathering at Anjar and later travel to Rajkot where he will inaugurate a museum dedicated to Mahatma Gandhi.

PM Narendra Modi inaugurates Mahatma Gandhi Museum at Alfred High School in Rajkot where the Father of the Nation had studied.

'Energy is essential for development'

"Energy is essential for development. Paucity of energy does not let any nation come out of poverty. If one needs freedom from poverty, wants financial development and a self-sufficient country, energy is necessary. Without it, even a mobile phone cannot be charged,"  PM Narendra Modi said, reported PTI.

Day is not far when India will overtake Britain's economy: PM Modi

"The day is not far, when the country's economy will overtake Britain's economy," Modi said addressing a gathering after inaugurating the Mundra LNG Terminal, Anjar-Mundra and the Palanpur-Pali-Barmer gas transmission projects at Anjar in Kutch district, Gujarat.

There are ample opportunities in the tourism sector. We have seen in Kutch too, how the White Rann has become the cynosure of all eyes from across the world. Like this, there are many places to discover in every district: PM @narendramodi https://t.co/ezLjE4GLVC

We are poised to make fourth LNG terminal: PM Narendra Modi in Anjar

The inauguration of the LNG terminal is the highlight of today's programme. I am fortunate to have inaugurated 3 LNG terminals. Now, we are poised to make fourth LNG terminal: PM Narendra Modi in Anjar in Kutch. #Gujarat pic.twitter.com/lbOynA8Dnw

'Today, the world is coming to Kutch'

"Everyone can see how Kutch has changed in the last 20 years. Those born after 2001 cannot imagine the lack of development in Kutch. The water problem was acute. Very few people came here. Today, the world is coming to Kutch," the Prime Minister said.

Amul's cartoon on the inauguration by PM Modi

PM Modi at the inauguration of chocolate plant 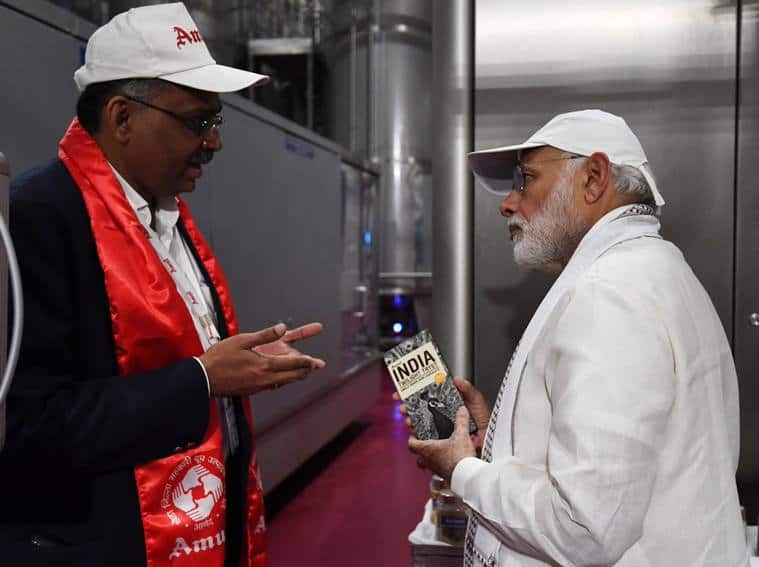 See photos from the event

Delighted to be in Anand, Gujarat, where development projects worth over Rs. 1100 crore were inaugurated or their foundation stones were laid.

These projects are associated with the dairy, food processing, agriculture and energy sectors. https://t.co/7TlRTuqSM2 pic.twitter.com/zDmLQxvzmb

Accusing the BJP of hijacking the Amul Dairy event where Prime Minister Narendra Modi is expected to unveil Rs 1,500 crore worth of projects and address a gathering of farmers, the vice-chairman of Amul, Rajendrasinh Parmar, on Saturday said that he would boycott the programme near Anand on Sunday.

“I will be boycotting the event,” said Parmar, who is also a Congress MLA from Borsad Assembly constituency.

When asked the reason for the boycott, he told The Sunday Express, “It does not look like a function organised by Amul Dairy. It now seems like a political function where one political party (BJP) is running the show. In the past, several Congress prime ministers have visited Amul Dairy, but flag of one political party was never used. The management of Amul has no idea of the function and it is the political party that is in charge.”

We are focussing on Jan Dhan, Van Dhan and Gobar Dhan. This will help our farmers: Prime Minister Narendra Modi in Gujarat's Anand pic.twitter.com/ZF3dcHgN5L

"I told several dairies in Gujarat to also work on the sweet revolution, which is related to honeybees. I am aware that Banas Dairy and the dairy in Amreli have done commendable work in this direction. I urge more dairies to also devote attention to this," PM Modi said.

Was mocked at for suggesting that camel milk should be made popular: PM Modi

A long time back, I had gone to Kutch and spoken about the need to popularise camel milk. That time a group of people mocked me.

But, today the camel milk chocolate of Amul is doing well: PM @narendramodi

In a few years, Amul will complete 75 years. Let us think about what targets Amul can set for their own 75th anniversary and for 2022, when India marks 75 years of freedom: PM Narendra Modi in Anand, Gujarat pic.twitter.com/LY7nYYqz9J

Things changed for the better for cooperatives after late 1990s: PM Modi

"For a long time, we had people sitting in Gandhinagar who disliked the cooperatives. They prevented the sector from acquiring a foothold in Saurashtra. Things changed after the late 1990s and today almost all districts in Gujarat are doing well in the sector," PM said.

"A century ago, Sardar Patel entered civic politics of Ahmedabad. He won from Dariapur. His margin of victory then was one vote. When he assumed office as the head of the municipality, he laid emphasis on urban development, planning and in that he worked on cooperative housing. Guided by Sardar Patel, Pritamrai Desai Ji worked on cooperative housing in a big way in Ahmedabad. These efforts gave wings to the aspirations of several people," PM Modi said.

PM addresses the gathering at Anand