The building, Speaker Om Birla said, will reflect the country's diversity and rich art culture, and will be the best Parliament building in terms of architecture, modernity and safety. 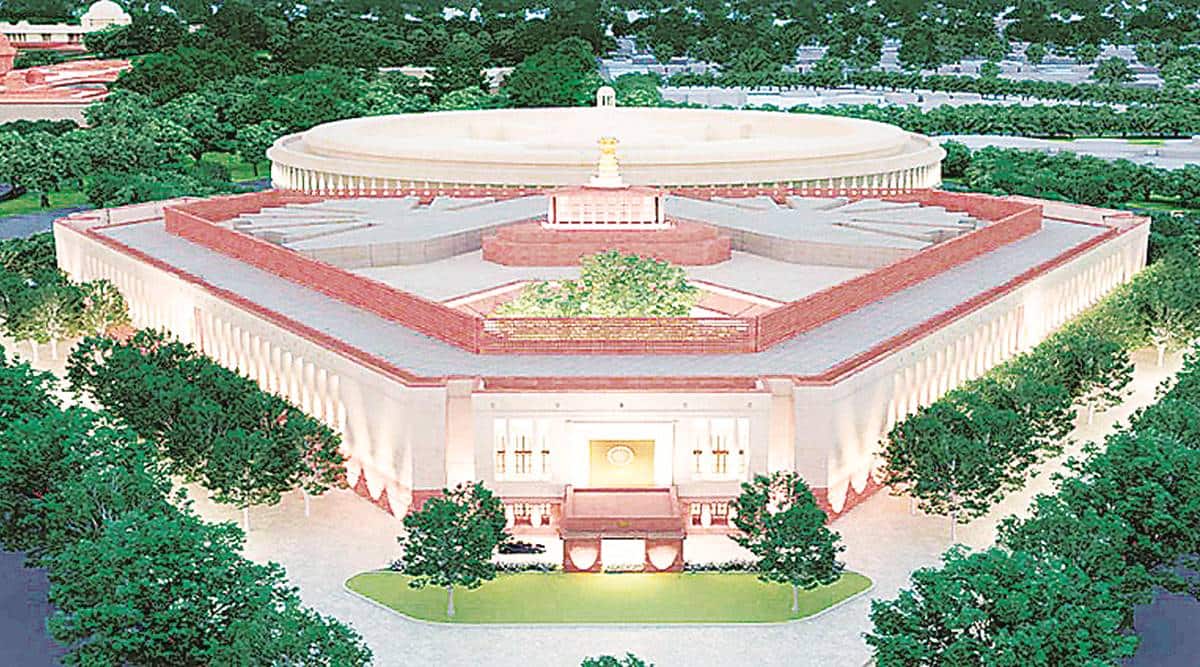 A model of the new Parliament building which is estimated to cost Rs 971 crore. (PTI)

Prime Minister Narendra Modi will lay the foundation stone for the new Parliament building on December 10, and the ceremony will be attended by leaders and representatives of all parties who will be present physically or via virtual mode.

Making this announcement at a press conference Saturday, Speaker Om Birla said: “We started the journey of independent India in the old building, and when we complete 75 years, we will have the session of both Houses in the new Parliament building… It will not be a building of bricks and stones, it will be the fulfilment of the dreams of 130 crore people.”

The building, he said, will reflect the country’s diversity and rich art culture, and will be the best Parliament building in terms of architecture, modernity and safety.

“The present Parliament building is going to be 100 years old, and it is a matter of pride for 130 crore people in this country that the new one will be built by our own people as a prime example of Atmanirbhar Bharat. Prime Minister Narendra Modi is going to do its bhoomi pujan at 1 pm on December 10,” he said.

The Speaker met the Prime Minister Saturday to officially invite him to the function.

During a joint session, the new Lok Sabha chamber will be able to accommodate 1224 members. The new building will not have a Central Hall.

The building, which is going to come up in an area of 64,500 sq m at a cost of Rs 971 crore, will be earthquake-resistant, and adaptable to the most modern digital technology. It will incorporate indigenous architecture from different parts of the country, and showcase the cultural diversity.

The Speaker said around 2000 people will be directly involved in its construction, while another 9000 will be there indirectly. More than 200 artists from various parts of the country will also work for the building.

An adjacent building, which will come up on the site of Shram Shakti Bhavan, will have rooms for all MPs, and will be connected via an underpass, the Speaker said.

He said there will be more committee rooms and all ministries will have offices. “Tata Projects Ltd has been given the contract for the project. The design has been prepared by HCP Design, Planning and Management Pvt Ltd,” he said.

The existing Parliament building, the Speaker said, will be conserved as an archaeological asset of the country.