The Prime Minister paid his respects at the gurdwara a day after the death anniversary of Guru Tegh Bahadur. 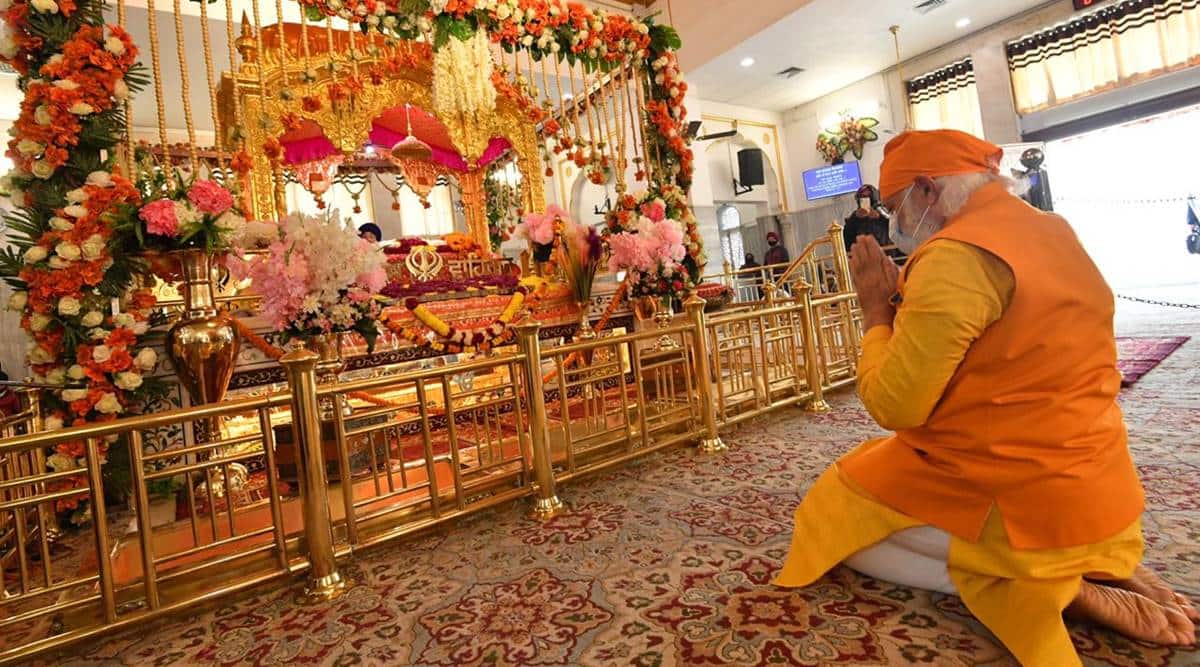 The prime minister's visit to one of the most popular gurudwaras in Delhi comes amid intense protests by farmers, especially from Punjab, against the three farm laws. (Twitter/Narendra Modi)

As the central government remains locked in a standoff with farmers, many of whom are Sikhs from Punjab, Prime Minister Narendra Modi on Sunday made an “unscheduled visit” to Gurdwara Rakab Ganj Sahib in New Delhi.

The Prime Minister paid his respects at the gurdwara a day after the death anniversary of Guru Tegh Bahadur.

Modi tweeted on Monday morning: “This morning, I prayed at the historic Gurudwara Rakabganj Sahib, where the pious body of Guru Teg Bahadur Ji was cremated. I felt extremely blessed. I, like millions around the world am deeply inspired by the kindnesses of Sri Guru Teg Bahadur Ji.”

The Guru’s martyrdom day is an occasion of deep religious significance for Sikhs. The special day was observed at the farmers’ protest site at Singhu Border on Saturday, complete with langars, ardaas (prayer), and paath (religious teachings).

Representatives of the government said this was a “sudden visit” and there “was no police bandobast or traffic barriers to the common man during this visit”. The Prime Minister met granthi Hardayal Singh at the gurdwara.

“They spoke only about the history of the gurdwara. Hardayal ji told the PM that Guru Tegh Bahadur’s body was cremated here. Modi ji also told him how he used to visit the gurdwara often when he used to live nearby. He also said he wanted to visit without any fuss,” a gurdwara official said on condition of anonymity.

They did not speak about the farm Bills or farmers’ protests, the official said. “This was neither the place, the day, nor the forum for any political discussion. He (the PM) had come as a devotee and was received as one,” the official said.

Since the farmers’ agitation started, the government has made several overtures to the Sikh community. It has come out with two booklets to show Modi’s special relationship with Sikhs, and the Prime Minister quoted Guru Nanak in his speech at the foundation stone-laying ceremony for the new Parliament building on December 10.

Again, on a recent visit to Kutch in Gujarat, Modi had invited farmers, many of whom were Sikhs, for a meeting.