Let’s talk how to manage destabilising effects of Russia’s war: Biden to Modi 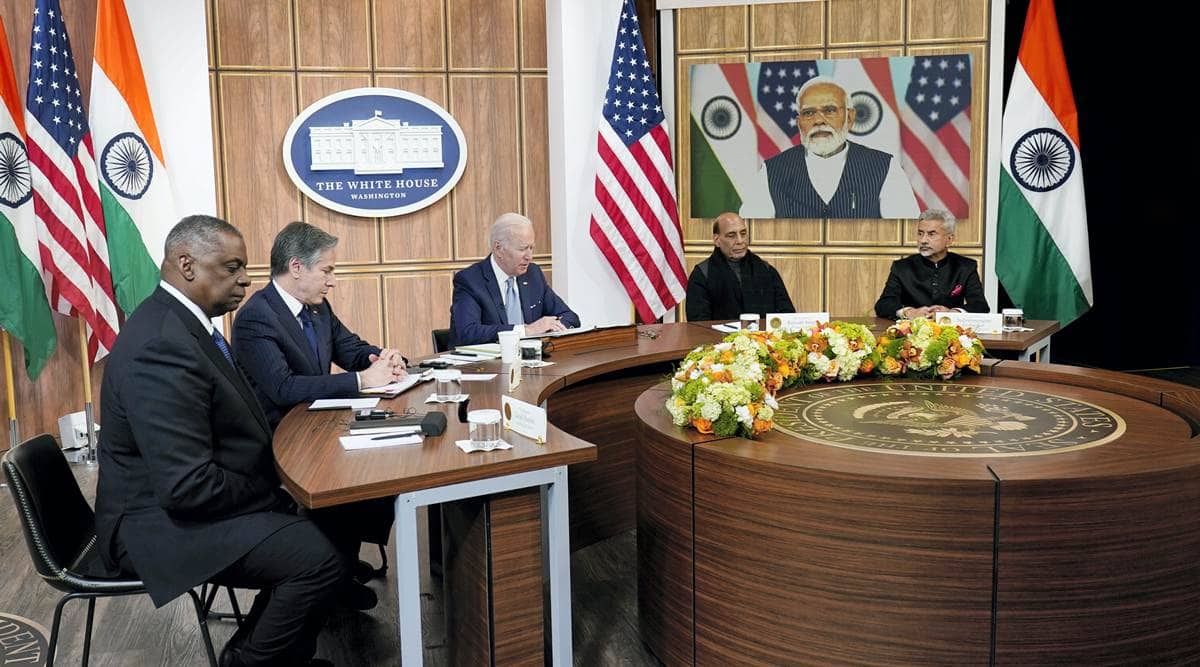 Welcoming India’s humanitarian support for the people of Ukraine and calling the Russian invasion a “horrific assault”, US President Joe Biden Monday said the US and India are going to continue “close consultation on how to manage the destabilizing effects of this Russian war”.

In his virtual meeting with Biden ahead of the 2+2 talks between their Defence and Foreign Ministers, Prime Minister Narendra Modi, who did not name Russia, called the “killings of innocent civilians” in Ukraine’s Bucha city “very worrying”, and said India immediately condemned the killings and called for an independent probe.

This is the first time the Prime Minister has spoken on the Bucha killings — External Affairs Minister S Jaishankar and T S Tirumurti, India’s envoy at the UN, have condemned it unequivocally in recent days.

Modi said he had held conversations with Russian President Vladimir Putin and Ukraine’s President Volodymyr Zelenskyy, and suggested that they hold “direct talks” between themselves.

After their meeting, the White House said, “They emphasized their shared commitment, as leaders of the world’s largest democracies, to respect for the sovereignty and territorial integrity of all nations in the Indo-Pacific and beyond. The two leaders also discussed the destabilizing impacts of Russia’s war against Ukraine, with a particular focus on global food supply.”

The video conference saw four ministers with Biden in the White House — Jaishankar, Defence Minister Rajnath Singh, US Secretary of State Antony Blinken and Defence Secretary Lloyd Austin. Also in the room were US NSA Jake Sullivan and Taranjit Singh Sandhu, India’s ambassador to the US.

Biden said he was looking forward to meeting Modi in Japan around May 24 for the Quad leaders’ summit. The four leaders last met in March via video conference.

The meeting Monday was at the initiative of the US President who, speaking first, flagged “shared values”: “At the root of our partnership is a deep connection between our peoples, ties of family, of friendship and of shared values. On that note, I want to welcome India’s humanitarian support for the people of Ukraine who are suffering a horrific assault, including a tragic shelling on a train station last week that killed dozens of innocent children and women and civilians attempting to flee the violence.”

“The United States and India are going to continue our close consultation on how to manage the destabilizing effects of this Russian war,” Biden told Modi.

“Throughout this development, I spoke to the Presidents of both Ukraine and Russia over the phone several times. I not only appealed for peace, but also suggested President Putin to have direct talks with the President of Ukraine,” he said.

Advertisement
Also read |Explained: Why did the United States resettle only 12 Ukrainian refugees in March

Stressing that India had extensive discussions on Ukraine in its Parliament as well, he said, “The news of the recent killings of innocent civilians in Bucha city was very worrying. We condemned it immediately and have also demanded an independent probe. We hope that the ongoing dialogue between Russia and Ukraine will pave the way for peace.”

“We have also laid emphasis on the security of the civilians in Ukraine and the uninterrupted supply of humanitarian aid to them, which you mentioned at the outset. We have sent medicines and other relief materials to Ukraine and its neighbouring countries. And on the demand of Ukraine, soon we are sending another consignment of medicines,” Modi said.

Biden said, “As two vibrant democracies, we have the same concerns about the global challenges we face from Covid-19, advancing health, security and tracking the climate crisis. And we share a strong and growing major defence partnership.”

Also read |Victoria Nuland: ‘Russia-China axis not good for India… US can help with defence supplies’

“Our continued consultation and dialogue are key to ensuring the US-India relationship continues to grow deeper and stronger, delivering our people and our global good that we all are seeking to manage, particularly in your part of the world,” he said.

Modi, who thanked the US President for the initiative on the virtual meeting before the 2+2 meeting, said, “Our meeting before that (the 2+2 meeting) is very important as it will provide direction for their discussions. When I was in Washington last year in September, and you, in fact, mentioned that you had said at the time that the India- America partnership can contribute to solving a lot of global problems. I totally agree with you. As two democracies that are the world’s largest and oldest, we are natural partners. And the progress that has taken place in our relations in the last few years, the new momentum that has been created, would have been hard to even imagine a few decades ago.”

Modi told Biden, “You gave a very important slogan at the very beginning of your term — Democracies can Deliver. The success of the partnership between India and the US is the best way to realize this slogan.”

After the meeting, a statement by the Ministry of External Affairs said the two leaders had extensive exchange of views on several regional and global issues, such as the Covid-19 pandemic, global economic recovery, climate action, recent developments in South Asia and the Indo-Pacific region, and the situation in Ukraine.

“They also took stock of the significant progress made in bilateral relations in recent years. Both leaders agreed that further strengthening of the India-US Comprehensive Global Strategic Partnership would be of tremendous benefit to the two countries, and would also contribute to global peace, prosperity and stability,” the MEA said.

After the 2+2 meetings, the two sides are likely to sign pacts on cooperation in the education and space sectors.

While Jaishankar met Blinken, Singh met Austin separately in bilateral meetings. “Began the day with a breakfast meeting with @SecBlinken. Wide ranging exchange of views on the global situation,regional hotspots and bilateral cooperation. Took place with the comfort and openness of true strategic partners,” Jaishankar tweeted.

Began the day with a breakfast meeting with @SecBlinken.

Wide ranging exchange of views on the global situation,regional hotspots and bilateral cooperation.

Took place with the comfort and openness of true strategic partners. pic.twitter.com/mOVJYSHMFT

Rajnath Singh, in a Twitter post, said: “Had a wonderful meeting with the US @SecDef, Mr Lloyd Austin at the Pentagon today. We reviewed the entire gamut of bilateral defence cooperation and the regional security situation.”

Jaishankar is also likely to meet Commerce Secretary Gina Raimondo and US Trade Representative Katherine Tai, while Singh will travel to Hawaii, headquarters of US Indo-Pacific Command, after his visit to Washington DC.

The conversation at the highest levels is significant in the wake of Russia’s aggression against Ukraine, and India’s carefully crafted diplomatic messaging to the US-led West and Russia. India recently abstained from a resolution to suspend Russia from the UN Human Rights Council, but at the same time condemned the killing of civilians in Bucha.

Among those Jagan dropped: Minister accused of running casino to another involved in spat with MLAs