PM Modi calls heads of all political parties to talk one nation, one election

During the meeting, Opposition leaders raised a number of issues, including farm distress, drought, unemployment, independence of institutions, “weakening of federalism”, and the J&K polls. Prime Minister Narendra Modi has called for a meeting with presidents of all political parties on June 19 to discuss the “one nation, one election” concept and other “important matters”, including the 150th birth anniversary of Mahatma Gandhi.

The Prime Minister made the call Sunday during a meeting that was convened with floor leaders of all parties in both Houses on the eve of the first session of the 17th Lok Sabha, according to Minister for Parliamentary Affairs Pralhad Joshi.

Taking to Twitter later, Modi wrote: “We had a fruitful all-party meeting today, the first one after the election results and before the start of the Monsoon Session. Thankful to the leaders for their valuable suggestions. We all agreed on the smooth running of Parliament so that we can fulfil people’s aspirations.”

Speaking to reporters, Joshi said the Prime Minister also called upon the floor leaders to “introspect whether Members of Parliament are able to fulfil people’s aspirations as their representatives and the manner in which last two years of the 16th Lok Sabha were wasted”.

Joshi said the government has also invited all members of the Lok Sabha and the Rajya Sabha to a dinner on June 20 for a “free exchange of views” and to “build team spirit among all Parliamentarians”.

In the all-party meeting before the Budget Session, sources quoted Modi as saying that because of disruptions in Parliament, the government’s work was delayed over the last two years. He said that with the mandate given by the people this time, the government should be allowed to function “at least for the next three years”.

In this Session, sources said, many of the Bills that have been stalled are set to be re-introduced. They include Bills related to Triple Talaq, Citizenship (Amendment), National Medical Commission, Surrogacy (Regulation), Aadhar and Land Acquisition that had lapsed after they were passed by the previous Lok Sabha but not Rajya Sabha.

Sources said the government also wants to take all parties onboard while planning celebrations to mark the completion of 75 years of India’s Independence in 2022 and 150 years of Mahatma Gandhi’s birth anniversary this year.

During the meeting, Opposition leaders raised a number of issues, including farm distress, drought, unemployment, independence of institutions, “weakening of federalism”, and the J&K polls.

“We also said that there are some issues that the government should pay attention to, such as those of the farmers, drought, lack of drinking water, and massive unemployment in the country. We also raised the issue of freedom of press and the behaviour of ruling party workers towards journalists. They (journalists) are being beaten and efforts are being made to muzzle their voice. We condemn that and urged the government to look into it,” he said.

Azad, a former J&K CM, said he also raised the issue of polls in the state, and that “there was no need for President’s rule”.

“On the one hand, the government said the environment was not conducive for holding assembly polls and on the other, it claimed that panchayat elections were carried out peacefully last year. Lok Sabha elections had also been held in the state peacefully. So why not conduct state polls?” he asked.

Trinamool leaders Bandyopadhyay and O’Brien demanded that the Women’s Reservation Bill be passed. The TMC, they said, had 35 per cent women MPs in the 16th Lok Sabha, and the number had gone up to 41 per cent. They also flagged their party’s concerns over “weakening of federalism” and alleged that the Centre was “deliberately targeting states”.

On electoral reforms, the TMC leaders said polls should be held through paper ballots. Referring to ordinances, Bandyopadhyay and O’Brien said the government must adhere to the “spirit of the Constitution” and that they were an “emergency” tool. “Unfortunately, in the 16th Lok Sabha, it had been blatantly overused. It had the highest percentage of ordinances in 70 years,” they claimed.

The YSR Congress sat with the Opposition, unlike the AIADMK, but offered issue-based support to the government. Sources said SP’s Ramgopal Yadav asked why the Home Ministry had sent an advisory to the West Bengal government but not to UP over deaths linked to the law-and-order situation. The BSP said it would not oppose privatisation if legislations are not put in place to protect the interests of SC/ST/OBCs.

Over the first two days of Parliament, the members will be administered the oath by the Pro-tem Speaker — the Speaker’s election will take place on June 19. The session will begin with the Presidential Address to a joint sitting of both Houses on June 20. 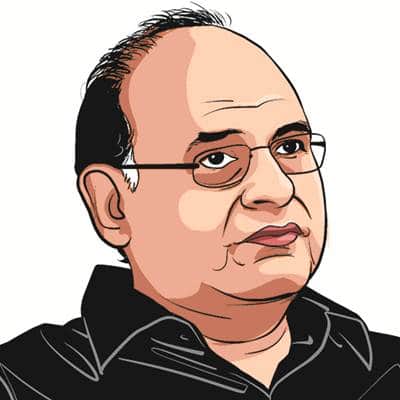